Valtonyc, the rapper from Mallorca who fled to exile in Belgium two years ago after a Spanish judge sentenced him to jail for some of his song lyrics, will have to wait another three months to find out if he will be extradited to Spain. The court of appeal in Ghent will decide on September 8th whether or not to accept the extradition request of the Mallorcan musician, real name Josep Miquel Arenas Beltrán. The postponement comes a day after the Spanish Supreme Court upheld the nine-month prison sentence given to fellow rap performer Pablo Hasél.

At this Tuesday's hearing on Belgium, which lasted just over half an hour, the judge heard the parties' latest submissions before retiring to consider its judgment. Thus, a decision that had been postponed indefinitely on March 24th by the Covid-19 crisis, has now been delayed for three further months. The judge has yet to determine whether the crimes for which the rapper was convicted in Spain have equivalents in Belgian law. "We are quite optimistic about the decision," said the artist's Flemish lawyer, Simone Bekaert.

In any case, the ruling could still be appealed to a third court.

"An ideological problem with left-wing rappers"

Valtonyc, who was ordered to jail in 2018 for lyrics which the court ruled were insulting to the monarchy, threatening to an individual and which glorified terrorism, submitted his view to the judge that his case is not "isolated", recalling the conviction against the rapper Hasel and other singers for similar crimes. "It's an ideological problem in Spain because, by coincidence all these rappers are left-wing, not right-wing," he told the Catalan News Agency.

Valtònyc once again defended his innocence and said he hopes that "Belgium will give Spain a slap in the face". "It's nonsense to extradite me, I'm not a terrorist," he said.

Before the session, Valtònyc commented that after two years he is still not used to standing "in front of three judges who do not speak my language, in a country that is not mine, waiting to see if they decide to send me to prison for three and a half years for writing songs". The singer clung to the hope that Belgian judges would find this situation "just as strange" as he did.

In March this year, the European Court of Justice ruled against Spain's attempt to obtain a fast-track extradition of the rapper by applying the penal code retroactively. That was the second knock-back for the Spanish judicial authorities after an earlier extradition claim was rejected in the summer of 2018.

How will the case continue?

With the judge's rejection of the Spanish attempt to use a fast-track extradition mechanism, the Ghent court must now investigate whether the offences for which the rapper was convicted in Spain have an equivalent in Belgian law.

According to Valtònyc's defence lawyer, the prosecution has admitted that the crime of exalting terrorism does not exist in Belgian law, but it now claims that this crime is equivalent to inciting terrorism.

Regardless of what the judge decides, the possible sentence could still be appealed to a third court, the Cour de cassation in Brussels. This is an option for both parties involved in the litigation: Valtònyc on the one hand, and the Belgian prosecution acting on behalf of the Spanish authorities, on the other.

The Belgian hearing comes a day after another rapper from the Spanish state, Pablo Rivadulla Duró, better known as Pablo Hasél, lost an appeal in the Supreme Court against a nine-month prison sentence for glorifying terrorism, and insulting the monarchy and security forces through "offensive" messages on Twitter. "The exercising of freedom of expression and opinion have limits", said the court, asserting that his song lyrics praised "not just political goals, but violent means" used by terrorist organizations such as ETA.

Only three of the five judges making the decision voted to confirm the sentence. The other two issued a minority opinion arguing that "neither the Twitter messages nor the song lyrics, when considered objectively, reach the level that corresponds to the crimes for which the sentence is issued".

As Pablo Hasél was already given a suspended two-year sentence on another similar charge in 2019, the additional conviction means the court could now decide to make him enter prison, judicial sources told the EFE agency. 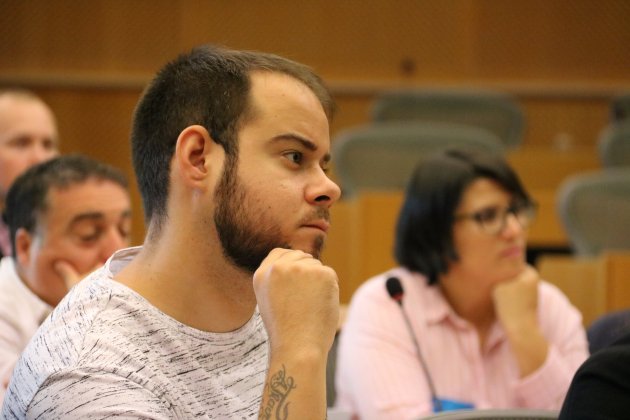 Rapper Pablo Hasél, from the Catalan city of Lleida