Repression continues to assault Catalonia. This was the key idea that the pro-independence and sovereignist parties emphasised today during the homage to the former president of the Generalitat of Catalonia, Lluís Companys, 81 years after his execution, and one day after Spain's Court of Accounts rejected the bail guarantees of a large group of former Catalan government officials. The political authorities of the Catalan government, the parliament and the Barcelona city council made floral offerings both in the Fossat de Santa Eulàlia area of Montjuïc Castle, near where the president was assassinated by the Franco regime in 1940, and in the Fossar de la Pedrera cemetery where the tomb of the Republican president is located. Speaking near the tomb, the Catalan president, Pere Aragonès, has condemned the attacks on Catalonia. 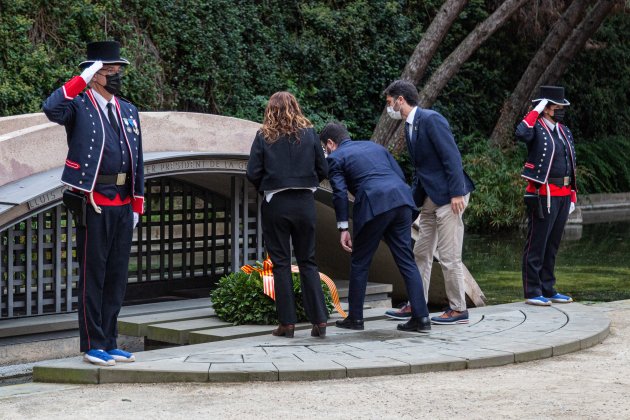 "Eighty-one years later, we see how the institutions continue to suffer attacks of those who want our people to be unable to aspire to the maximum of liberty and social justice," said Aragonès, who said that with the death of Companys, there was a will to "kill the institutions of the country" but they could not, and that is why years later we must continue: "The best tribute we can pay to president Companys is to persevere until we achieve the freedom and justice of the Catalan republic."

He considered Thursday's decision by the Court of Accounts to be another example of this repression, a "cause that is guided by revenge and the will to repress", and accused the auditing tribunal of acting on political and ideological - not legal - criteria, and thus he appealed for the Court to be combated with "all legal resources, with the utmost collective solidarity and with the utmost national ambition."

The Speaker of the Catalan Parliament, Laura Borràs, also spoke about the Court of Accounts, asserting that the political persecution that Companys suffered under the Spanish government of the day is still very much alive: "If the assassination of Companys took place under the dark night of fascism, with these current actions Spain perseveres in not wanting to be a full democracy". 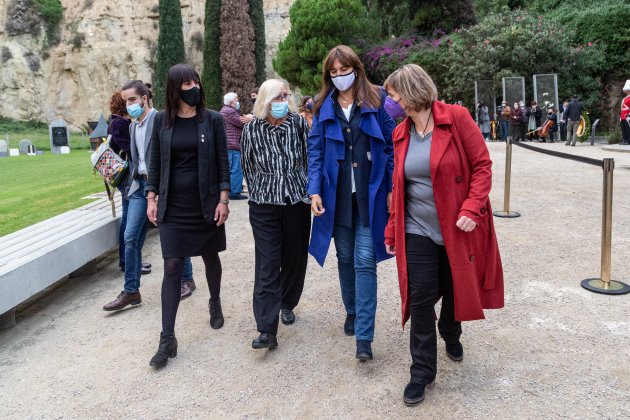 Tribute from the Bureau of Parliament to Lluís Companys / Montse Giralt

Political party representatives also spoke at the Fossar de la Pedrera. ERC president Oriol Junqueras railed against the Spanish auditing tribunal's decision calling it inhumane and undemocratic, and said that he, as a defendant in the case, will stand up to this repression with the same courage with which he faced imprisonment. Jordi Sànchez (Junts) warned that the state continues with a thirst for revenge "seeking the civil death of a whole group of people", and he urged everyone to continue with "heads held high". 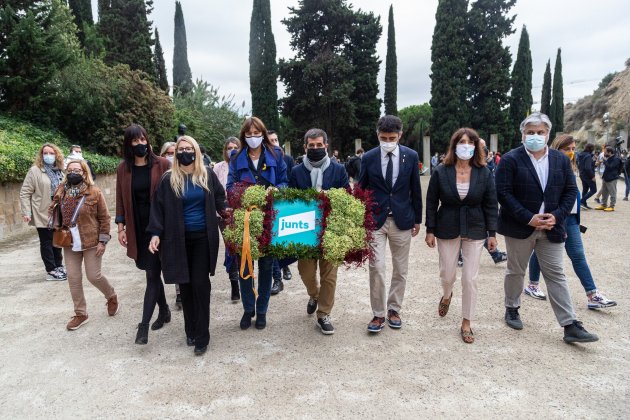 CUP deputy Carles Riera said that struggle is the only possible way forward and that it must continue because of all the people who continue to be victims of state repression. And also present was the president of the Unidas Podemos parliamentary group, Jaume Asens, who said that the decision of the Court of Accounts is "full of illegitimacy" because it is an "outdated element", and recalled that a renewal of the organ is being pushed for. From PDeCAT, the Congressional deputy Genís Boadella asked for reparation for the figure of Companys and described as the decision of the Court of Accounts as unjust, while Antoni Castellà (Democrats) appealed for an end to dialogue with the central government until it ends "hostilities".

Finally, Marcel Mauri (Omnium Cultural) reflected that the tribunal's decision over the guarantees shows that many Spanish institutions continue to be closely linked to the Franco regime - because they continue to retaliate, and the president of the Catalan National Assembly, Elisenda Paluzie, aserted that the best act of memory for Companys is to fight for the Catalan republic.