The Fossar de la Pedrera (the Quarry Graveyard), part of Barcelona's Montjuïc Cemetery, is the largest mass grave of victims of Francisco Franco's repression in Catalonia. Nobody knows how many bodies are buried here, which could be as much as 15 metres deep. It is said that the corpses of those executed under Spain's long 20th century dictatorship were deposited here using a kind of a chute. It is clear that many of those shot at the main Francoist execution site, far across the city at the Camp de la Bota, ended up in this pit, since bodies were not generally returned to families to avoid them receiving funeral homages. Thus, along with the bodies of the poor, and unidentified corpses, there are hundreds who died by execution in the Fossar de la Pedrera, now converted into a monument to those executed by the Franco regime. This space has been investigated by historian Ricard Conesa, a researcher with EUROM, the European Observatory on Memories, part of the University of Barcelona's Solidarity Foundation. Conesa has taken El Nacional around the thought-provoking memorials of Barcelona's principal cemetery, on Montjuïc mountain. 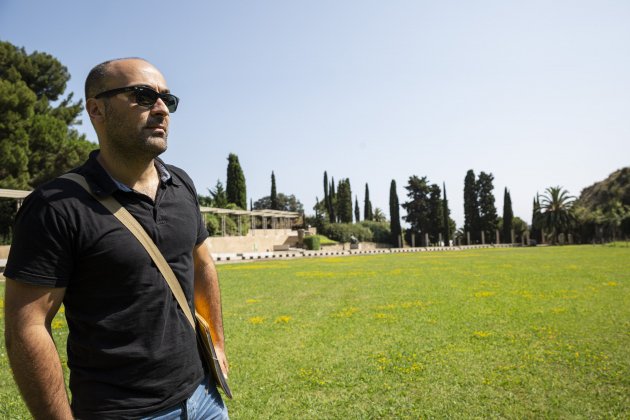 The peace after the war

In the 1960s, says Conesa, the Fossar de la Pedrera, where hundreds of people were interred, looked like a rubbish heap. It was the most hidden part of the cemetery, the most neglected, and it was surrounded on the mountain of Montjuïc by shanty housing, and people tossed rubbish and rubble into it. As the Franco regime came to its end, the Catalan historical memory association APMILC requested that a memorial be built there, and that it should also contain the remains of assassinated 1930s Catalan president Lluís Companys (which were then in a family burial niche). The project came to fruition in 1985. Although there was no experience in Catalonia of such monuments, architect Beth Galí tried to integrate the memorial into nature, leaving the walls of the quarry intact and preserving some of the features of the place, but transforming it into a laic space of peace: imposing, but pleasant; accessed via stone steps which, after a curve, suddenly open on to columns giving the names of those who were executed. Behind the columns, is the esplanade where the mass grave is located, partly covered with cement and partly with grass, a kind of "secret garden". The visitor effectively walks over the bodies of those who were executed. To one side, in a shady space with a small artificial lake amid vegetation, is the tomb of Companys. The space ends in a small square where the Monument to those Sacrificed for the Freedom of Catalonia was originally placed, funded by public subscription; later, this was moved to the entrance to the Memorial, and was replaced by an anarchist monument in memory of the victims of the revolution (a wrought iron form that alludes to a cypress tree). 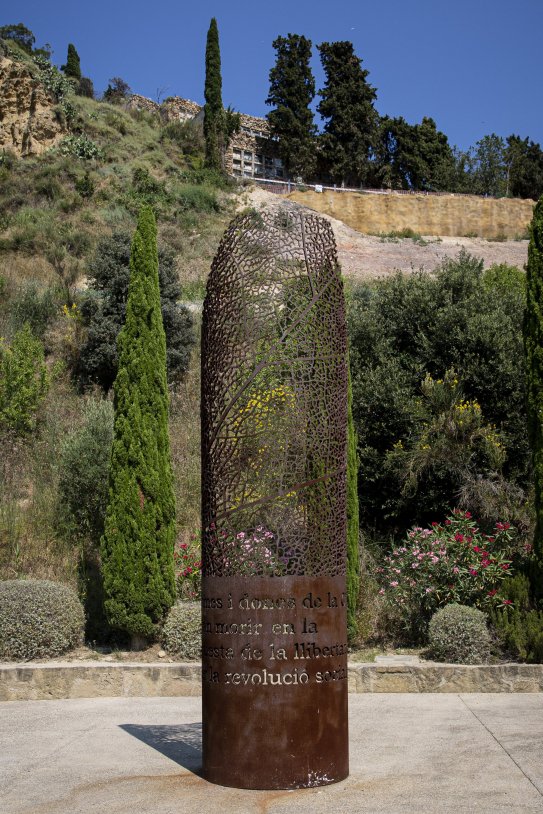 But this funerary space has not been free of conflict. Conesa explains that on the columns at the entranceway it was originally planned to include the names of all political prisoners executed by the Franco regime in Barcelona (since it is impossible to know which of them were brought here and which were buried elsewhere). But this principle was not respected in practice. There were many types of exceptions. Sometimes, names were added to the columns at the request of relatives, with no consensus about their inclusion.

One particularly controversial case was the name of the gunman Justo Bueno. He was one of the murderers of the Bahia brothers (controversial leaders of the 1930s nationalist group Estat Català) and later, during the civil war, he participated in the so-called Control Patrols that gained a reputation for extra-judicial killings, and he was personally accused of several crimes by the Republican authorities. He fled to France and when he returned to Spain he was allowed to go free by the Franco regime. Later he was jailed and executed. His name was erased from the columns of the Fossar on several occasions by supporters of Estat Català (later being restored by the Barcelona city council). Conesa recalls that memory is not immovable, but rather it holds up questions to us, and he points out that Bueno's example forces us to reflect on who is a victim and how to handle the ambiguities, a problem that remains thoroughly relevant at a time when historical memory is in great dispute. "Memory is conflictive," he concludes. 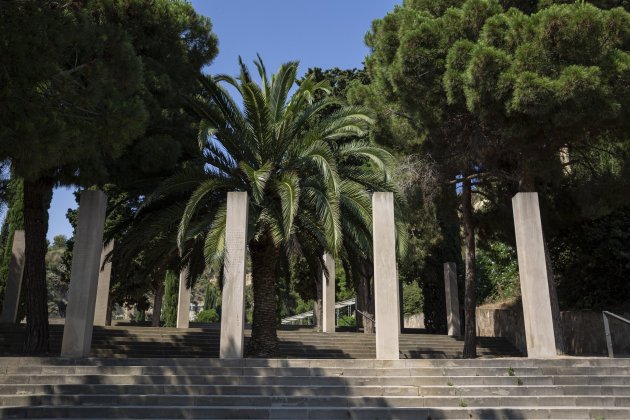 The dead who are there and the names that are not

Ricard Conesa explains that in the early 2000s former Catalan president Pasqual Maragall stated that one day the names of those killed behind the Republican lines, such as people executed by the Control Patrols or by the legitimate authorities, should also be added to the columns of the Fossar de la Pedrera memorial. It was a proposal that caused discomfort to those who wanted this to be a space dedicated to the memory of anti-Francoism and a tribute to democracy. It is probable that buried in the Fossar de la Pedrera there are also people executed by the 1930s Republic or the Control Patrols, as many of the corpses of those killed in reprisals were thrown into the various mass graves of the cemetery (there must also be victims of the city's aerial bombardment among them). Similarly, it is likely that executed Republicans and fascists are mixed together, in other mass graves where there is no commemorative monument (the cemetery records only give the names of those who were buried in mass graves, without specifying which one they were taken to). In spite of this, Conesa prefers not to mix the memories of the different sides of the civil war, and reminds us that those who died for the Republic defended the freedoms which we regard ourselves as heirs to. His preference is for the dead of the Francoist side to have their own spaces of memory, separated from those of their adversaries. And he asks: would anyone think of making a single memorial to both New York's World Trade Centre terrorists and to their many victims? Conesa recalls that by reducing people to mere "victims" we strip them of all their political and social baggage, and that also is a way to annihilate them posthumously. 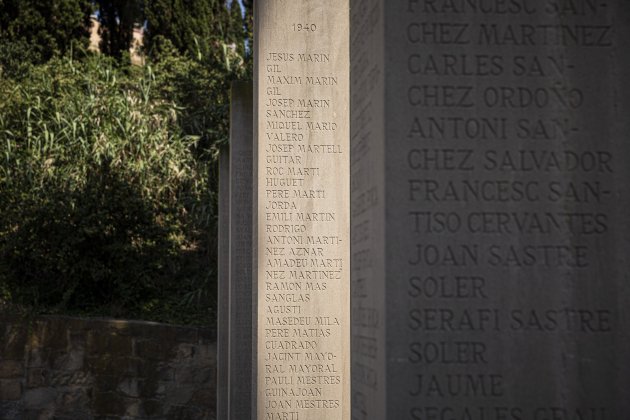 Lluís Companys, on his own

Without a doubt, one of the most beautiful parts of the Republican memorial is the tomb to Catalan president Companys, executed by the Franco regime in 1940. Architect Beth Galí placed the tomb in the middle of a small pond, and the water contrasts with the dryness of the rest of the space. Frogs, trees and algae offer a freshness to the visitor. But there are also those who ask why this vision is so elitist: why is the president separated from the citizens, when all were murdered by the same executioners? 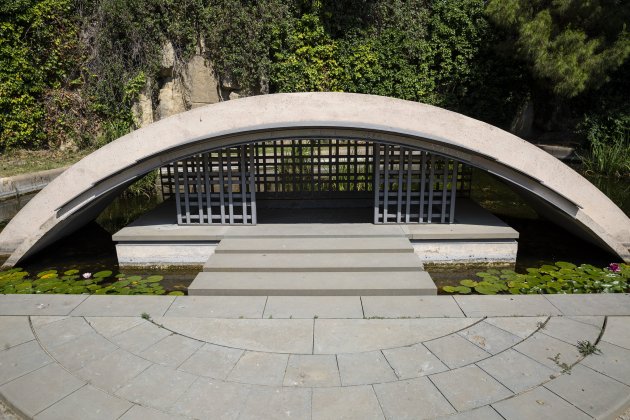 Conesa explains, with documentation, that when the remodeling of the Fossar de la Pedrera was first considered, in the space there were some isolated tombstones (placed by relatives of those buried there) and also numerous wooden crosses (in cases where families couldn't afford a tombstone). Later, after the inauguration of the Fossar, the laying of commemorative plaques dedicated to many different types of memories began to proliferate, and finally the city council decided to ban new ones, on the grounds that it distorted the purpose of offering a joint memorial to all the victims of the Franco regime. 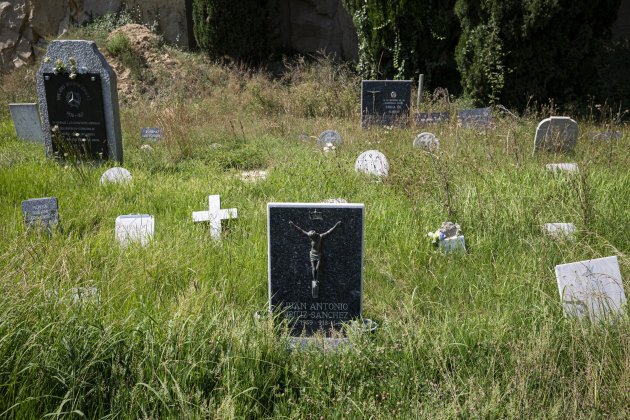 In 1995, Barcelona's Israeli community requested that a memorial be created in the city in memory of the Jews exterminated in the Nazi camps. The council approved the idea, and installed the monument, also at the Fossar de la Pedrera. The monument, designed by Leonard Glasser, has a great beauty. It consists of two large monoliths, and 10 stones representing the 10 Nazi extermination camps. On those stones, those who want to remember some person are able to place a small stone, in line with Jewish tradition. Ricard Conesa explains that relatives of victims of Franco were unhappy about this monument being located at the Pedrera memorial, and even more so about its preeminent location there. They considered that this diluted the anti-Franco meaning of the site. To reinforce this sense, they called for the monument to the victims of Franco, which was half hidden, to be moved to a prominent position, next to the columns. And this was done. 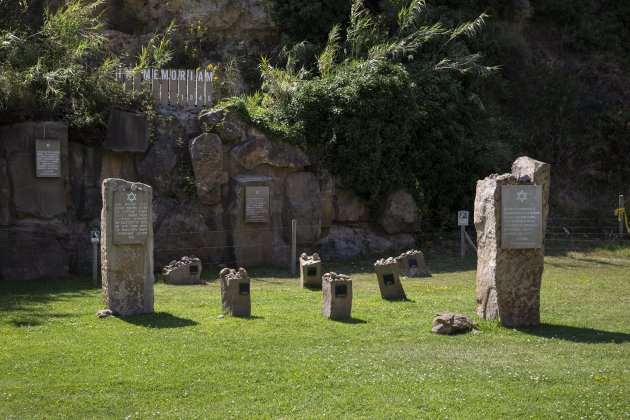 Not far from the Fossar de la Pedrera, side by side, are the graves of FAI leader and hero of anarchism Buenaventura Durruti (who died in the civil war in unclear circumstances), anarchist Francisco Ascaso (killed on 18th July 1936 at the Drassanes barracks in Barcelona in the first assault to put down the military uprising) and educationalist and freethinker Francesc Ferrer i Guàrdia (executed in 1909, accused of helping provoke Barcelona's so-called Tragic Week of rioting in that year). There are, however, some doubts as to whether Durruti's body is in his grave; Conesa explains a theory that he was exhumed to avoid profanations from Francoists. In any case, the three graves are a place of pilgrimage for anarchists, who often pay homage in a special way: placing anarchist stickers on the headstones and explanatory panels. 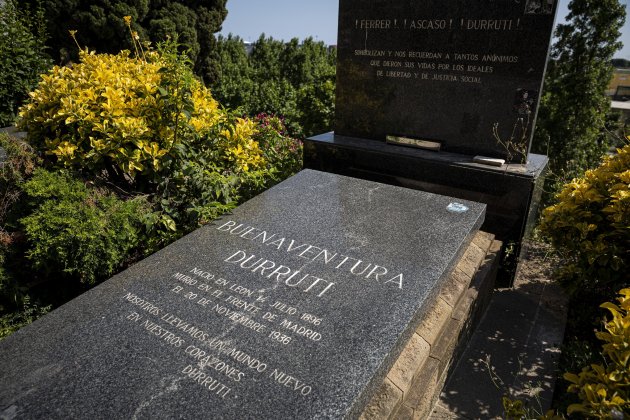 On some days, anarchist stickers also end up covering the headstone of early 20th century labour lawyer Francesc Layret, placed by the UGT trade union: it seems that the anarchists are not comfortable with the socialist-backed union's attempt to monopolize the memory of a lawyer who was not really in either of their camps. 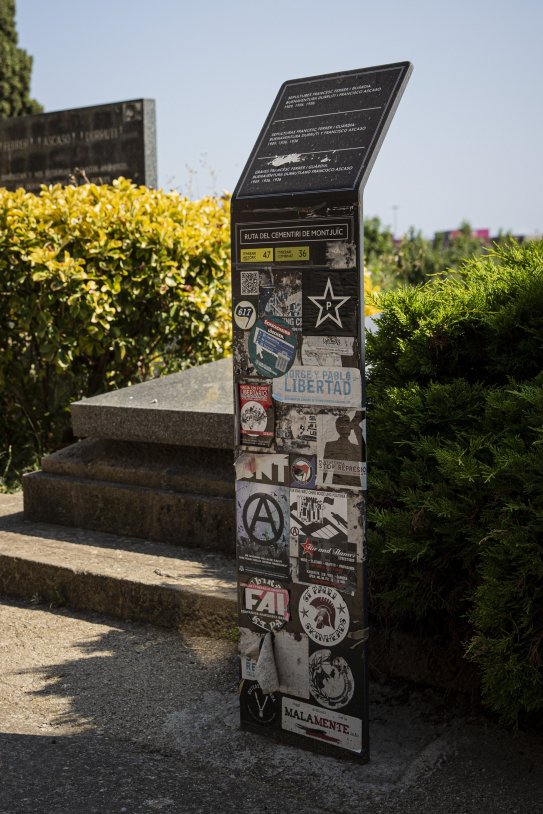 The other memories of Montjuïc

In Montjuïc there are other places that are sites of political homage. The most famous is that of Francesc Macià, the Catalan president who died in office in 1933. But Montjuïc is also a key place in the memory of nostalgic Francoism. In fact, some supporters of the 1936 military uprising and members of the Franco fifth column were executed in Montjuïc Castle. Although the Francoist monument to the "Fallen" in Avinguda Diagonal (located in front of the Royal Palace) was completely demolished in 2005, a Francoist monument, with only a few alterations remains, in the Fossar de Santa Helena, in Montjuïc Castle. Until 2015 there were still masses glorifying Franco held here, until the city council blocked them under the Law of Historical Memory. But in the Montjuïc cemetery itself there are also memorials to the Francoists. Ricard Conesa has located plaques, quite discreetly placed, in the cemetery's Mediterranean Garden, where another one of the common graves of the cemetery was located. 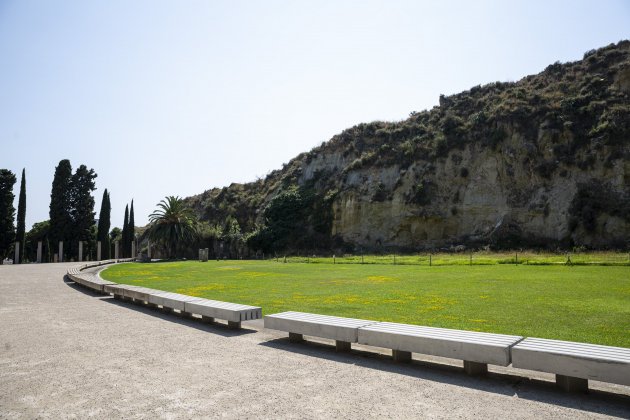 The Fossar de la Pedrera is one of the most important commemorative spaces in Catalonia, but it is not at all popular (perhaps because it is far from tourist areas, unlike the Fossar de les Moreres en El Born). The space created as a memorial to Franco's murders is in the most hidden part of the Montjuïc Cemetery, which in itself is invisible to much of the city, because our society hides the dead. Although the commemorative monument is visited by the authorities every October 15th, on the anniversary of the death of Lluís Companys, and the families of victims hold an annual gathering every autumn, it is generally empty. Few people know of it (at lightyears from the German war memorials, which are constantly visited by primary and secondary schools). Ricard Conesa believes we should reflect on what should be done with the memorial and whether it serves a social purpose we want. He believes it could be an enormously important educational element. "It is not enough to build a memorial, you have to know what to do with it and give it the maximum potential," the researcher explains.