"Let's have a nationwide call for an Amnesty Law", say Catalan groups and parties

Catalan pro-independence political parties and civil groups have held a joint event in Barcelona's former jail, the Presó Model, to launch the campaign for an amnesty law which this week will receive its first push in the Catalan Parliament and on March 15th next year is expected to enter Spain's Congress of Deputies. The vice-president of the Òmnium Cultural group, Marcel Mauri, celebrated the agreement between political parties, pro-independence organizations and civil society to campaign for a law which aims to end prosecution of all "acts with political intention" related to the claim of self-determination. To achieve the law, broad, transversal agreements "with the maximum of social and citizen support" were required, said Mauri. "We want to see a nationwide call for an amnesty across Catalonia," he added.

"There is no other option that includes all those who are facing retaliation [as a result of the independence process] and that is why we celebrate that the sovereignty movement has re-taken the initiative. Only through an amnesty and self-determination can we resolve this political conflict," said Mauri, who thanked the generosity of those who had worked for the proposal so far. 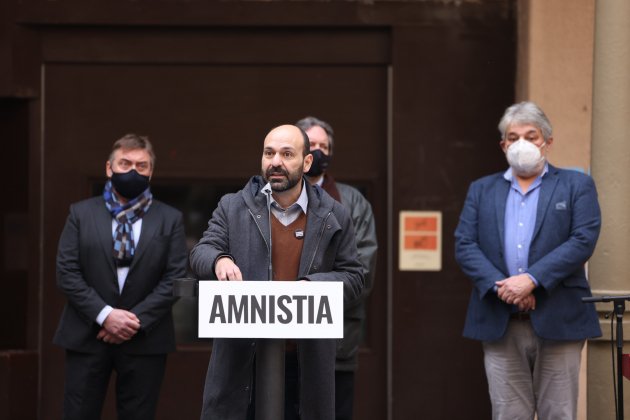 ERC spokesperson Marta Vilalta asserted that an amnesty law is the "best tool" for a democratic solution to the political conflict, "to start drafting a political way out, with the release of prisoners and the return of exiles, as well as the annulment of all cases opened and the end of the legal persecution of the independence movement".

Vilalta, who recalled that more than 1,800 people have been prosecuted in what she described as a "general case against the independence movement" through the Spanish state's application of the "criminal law of the enemy", warned that this solution will only be successful if it also puts on the table the exercise of the right to self-determination.

Borràs: "It's not clemency, but justice"

JxCat spokesperson in Congress, Laura Borràs, who spoke via video, also affirmed that amnesty was a starting point, which could resolve the anomaly of repression, but not the exercise of the right to self-determination. "Generally, an amnesty means agreeing to forget or forgive a category of crimes. We do not put this forward as an act of forgiveness, but rather as a correction of an error. It is not clemency that we ask for, but justice".

Borràs added that although the independence movement has not "expected justice or democracy from the Spanish state for a long time", it has never abandoned "the path of seeking justice and democracy in politics".

Sànchez: in Congress on March 15th

On behalf of the CUP, Natàlia Sànchez said that the way forward for the amnesty law will have two key moments: the debate and vote this week in the Catalan Parliament on a motion for a resolution - which, if passed, will declare the Catalan Parliament's support for such a law - and secondly, the initiative and presentation on March 15th of the draft law itself in the Congress of Deputies. "It is essential for the achievement of self-determination that the repression is ended," she asserted.

The voice of the ERC's Marta Rovira was heard through a pre-recorded speech, as well as those of JxCat president Carles Puigdemont, and the former CUP deputy Anna Gabriel.

Conflict with the PDeCAT

However, the unity shown this morning by the parties at the campaign launch began to explode even before the event began, in the face of protests from representatives of the PDeCAT party, who were present, but complained that they had not been reserved space to take part.

Today's presentation of the Amnesty Law campaign at the former Barcelona campaign.

The draft bill for the Amnesty Law that will begin its journey in the Catalan Parliament this week will cover all "acts with political intention" related to the claim of self-determination that have been carried out since January 1st, 2013 and will include both the consultation on 9th November 2014 and the referendum on 1st October 2017 as well as the October 2019 protests following the trial verdicts. The bill calls for the immediate release of the political prisoners and the extinction of all crimes, open cases and convictions arising from such trials.

The "Proposed Law for an Amnesty and the Resolution of the Political Conflict between Catalonia and the Spanish State" states in its first article that, once the text is approved by Congress, “an amnesty is granted to all acts of "political intentionality, whatever the result, classified as crimes or conduct for which there is administrative liability, carried out from 1st January 2013 until the entry into force of this law."

According to this initiative, any act linked to the democratic struggle for the self-determination of Catalonia is considered “political intentionality”.

The full draft as it currently stands in its Catalan version is below.