The judge investigating alleged offences of misuse of public funds linked to the Catalan independence process has released all of those arrested in the high-profile Operation Volhov police raid. Nine of the 21 people arrested on Wednesday - who were still being held in Civil Guard cells - appeared on Friday before the judge of Barcelona court of investigation number 1, Joaquín Aguirre. Among them are three people who the Civil Guard investigation claims were members of the "general staff" of the 1st October 2017 independence referendum: former Catalan minister Xavier Vendrell, former politician David Madí and media entrepreneur Oriol Soler.

All the defendants availed themselves of their right not to testify and the public prosecutors did not request custody or other precautionary measures. The judge released all 21 of those arrested by the Civil Guard in Wednesday's operation, but with charges pending. Thus, a police operation that functioned as an incendiary device with absurd accusations has, for the moment, ends its first phase by lowering the level of judicial expectations. 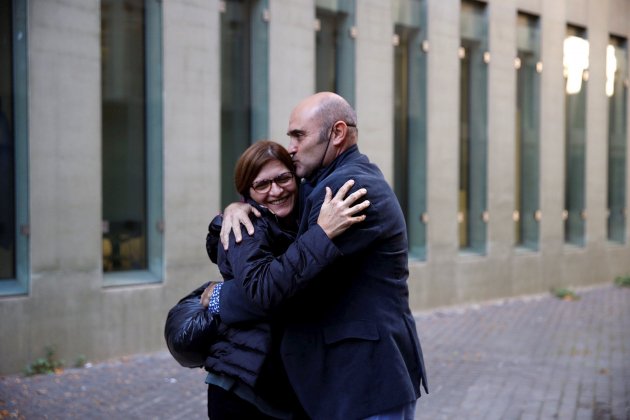 Those released were former Catalan government minister Xavier Vendrell (ERC party), former CDC politician David Madí; businessperson Oriol Soler, the former honorary consul of Latvia in Barcelona and president of a group promoting Catalan national sports teams, Xavier Vinyals; Antoni Fusté Piñol and Roc Aguilera Vaques, two of the management of the company Events from town of Igualada, dedicated to assembling stages, and investigated for allegedly being behind the one which the protest platform Tsunami Democràtic installed in its two-day motorway blockade last year; and businesspeople Marta Molina and Enric Mir.

Family, friends and political representatives such as JxCat's Laura Borràs and Francesc de Dalmases, and Marta Vilalta from ERC waited for the release of the pro-independence prisoners at Barcelona's Ciutat de Justícia court complex. 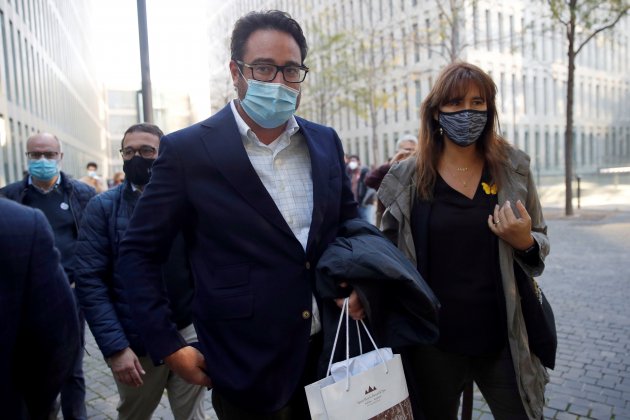 Leaders of the pro-independence civil groups ANC and Òmnium were also among the dozens of supporters awaiting the release of those arrested.

"Let's not forget, there are people who were jailed for months on charges of terrorism who were suddenly released and allowed to go home," said Òmnium's Marcel Mauri, arguing that, in the repeated cases of these high-profile Civil Guard raids, "what the state does is always construct false narratives". "All they are doing is inventing evidence which is baseless and at times ridiculous," he added.

The allegations of a plot to divert public subsidies to finance the expenses of former president Carles Puigdemont in Belgium - involving accusations misuse of public funds, bribery, abuse of public office, influence peddling, money laundering and public disorder - is the result of telephone conversations intercepted during the year and a half that the case has been kept confidential.

The judge asserts that Xavier Vendrell, former Catalan MP and minister, was a leader of the Tsunami Democràtic protest platform, which he allegedly used to “promote” public disorder after the announcement of the pro-independence leaders' jail sentences in October 2019. In addition, the judge finds evidence that Vendrell used his political influence in contacts with members of the Catalan government to benefit his various businesses, linked to the treatment of municipal waste, biomechanical laboratories and even the manufacture of Covid-19 tests.

In the case of David Madí, businessperson and official in the now-defunct CDC party, the judge suspects that he benefited from "significant influence peddling" with minister Damià Calvet (JxCat) and that he hired former ERC minister Joan Puigcercós to "open municipal councils". Regarding media director Oriol Soler, the judge stated that there are indications of his participation in the "organizational structure" of the Tsunami Democràtic and is suspicious of the almost 3 million euros in subsidies his firms received from the Catalan administration between 2016 and 2020.

Oustide the Barcelona court on Friday, JxCat deputy Laura Bossàs asserted: "The central thread of all these indiscriminate arrests by the Civil Guard, and they are very clear about their objective, is intimidation of the independence movement." She said that "the state's patriotic police" is using "fear" as a weapon in the massive police raids on homes: "They could have called these people to appear in court but they prefer to upset their families."