On the occasion of the fourth anniversary of the October 1st independence referendum, the Catalan government made an institutional statement this morning. At the exact time when the polling stations opened on this day four years ago - 9am - members of the Catalan executive appeared at the CatSalut Central Services headquarters, which was one of the voting centres in 2017. The president, Pere Aragonès, underlined the "great consensus" that made the 1st October vote possible, declared his government as the heir to that referendum and assured that the executive is committed to culminating the path to independence. "In the first place, forcing negotiations with the Spanish state, but not just that, without renouncing anything," he asserted.

The day after the independence movement made clear its division in Parliament on the strategy to be followed to culminate independence, and with the deep split that separates the two government partners over the dialogue table, at which Junts is not present, the ERC leader emphasized the unity that that day represented and he called for a new consensus. Speaking in similar terms, vice president Jordi Puignerò (Junts) carried out the formality of opening the institutional declaration.

President Aragonès called to Catalans to "continuing exercising that strength, that energy able to cope with anything to culminate the path." “From this point on, with all the resources we have and everywhere,” he asserted.

"It's time now to recover the spirit of October 1st, noting that when we work together, when we achieved communion in the first days of October, this country is unstoppable. The referendum was possible thanks to the consensus of political parties and social movements, complicity between the institution and the citizens", recalled Aragonès, who did not tire of repeating the appeals to the "great consensus".

According to the president, the matters on which there is great consensus are now very clear: an end to the Spanish state's repression and the triple demand of referendum, self-determination and amnesty. 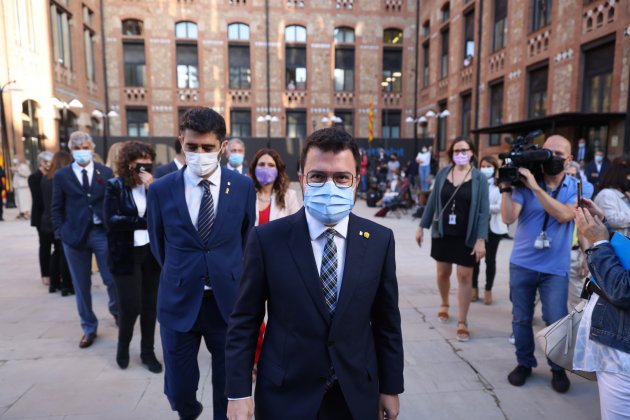 He insisted on underlining the strength that Catalan citizens showed that day and stated that the government of the Generalitat "declares itself proud of the 1st October referendum and swears that it will work to make its culmination possible".

Point of no return

The president warned that 1st October marks a "point of no return", a point of inflection and reaffirmation by the people of Catalonia in defence of their sovereignty. "A majority of the country's citizens went out to exercise their right to vote no matter what that might have entailed; the Catalan people decided that they had the right to decide their future at the polls," he recalled, declaring that this was "a milestone unimaginable without collective force” and that the state’s response was violence, repression, judicialization, imprisonment and forced exile.

He guaranteed that Catalonia will vote again, because the referendum is the inevitable solution, and the Catalans and the Spanish state know this, because it is the only option that allows everyone to express themselves freely.

Puigneró also highlighted the unity of that morning of 1st October. "Our country was about to live through the most momentous moment in our history. The founding moment of the Catalan Republic. An unprecedented democratic act that took place despite having a state obsessed with preventing it, underestimating the strength of the people of Catalonia ", the vice president recalled.

In the main image, Catalan president Pere Aragonès and the members of his Catalan government, at the Catalan health ministry headquarters, where a polling station  was located on 1st October 2017. / Sergi Alcàzar