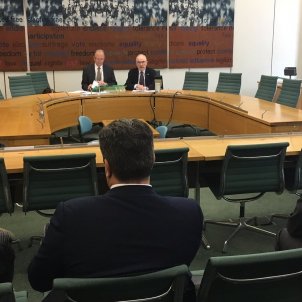 The Catalan ombudsman, Rafael Ribó, and former chief constable of Northern Ireland Sir Hugh Orde, two of the witnesses Spain's Supreme Court refused to let the defence call on during the Catalan independence trial, have appeared today in Westminster. They were speaking during an event called "Human Rights, Status in Catalonia: dialogue and freedom appeal" organised by the All-Party Parliamentary Group on Catalonia.

Sir Hugh Orde was one of two former senior British police officers who wrote a report on the protests in Catalonia on 20th September and 1st October 2017, the subject of the trial. The report concluded that the crowds those days had no intention of violence or to commit any crimes. At the same time, it also said that aspects of the police operation were "difficult to understand" and "very risky".

Ribó today gave a summary of the main actions taken out by his office relating to fundamental rights in response to the actions of the Spanish state. His speech was based on three reports he presented to the Catalan Parliament: one on irregularities committed by the Parliament itself, one on the violence used by the Spanish security forces on the day of the referendum, and one of the concerns over the violation of rights like freedom of expression and assembly as well as political participation and representation, the suppression of self-government and disproportionate response through the justice system.

The ombudsman called for dialogue, involvement from the different parties and the release of the prisoners as the only path to solving the Catalan conflict.

[ENG] The Catalan Ombudsman explains the situation of human rights in Catalonia at @UKParliament https://t.co/35TIbCdYZc 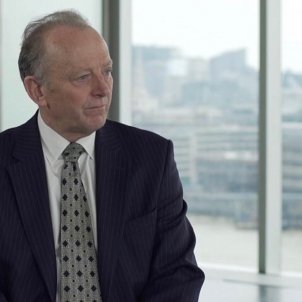