Spain is at risk of being downgraded to a "flawed" democracy over Mariano Rajoy's government's handling of the Catalonia issue. In their annual Democracy Index, the Economist Intelligence Unit, sister company to The Economist magazine, Spain's rating has dropped from 8.30 to 8.08 points, on the borderline between "full democracy" and "flawed democracy".

The downgrading is due to the Spanish government's "attempt to stop by force Catalonia’s illegal referendum on independence on October 1st and its repressive treatment of pro-independence politicians", according to the report, which warns that the Spanish government's moves, like the police repression of the referendum and the application of article 155 of the Constitution, have led Spain to a decline in the quality of its democracy.

Spain's position in the 2016 version of the ranking was quoted by king Felipe VI at the Davos World Economic Forum to validate the strength of Spanish democracy. 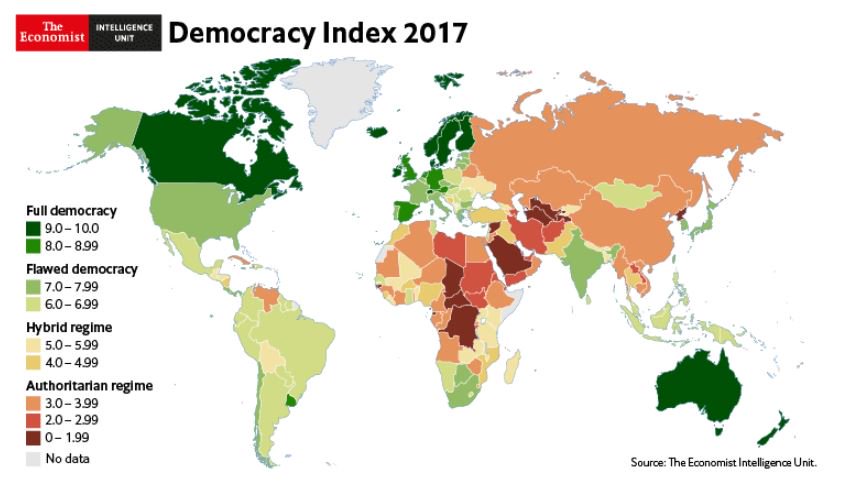 The Economist Intelligence Unit is a company within the Economist group headlined by the magazine of the same name which offers forecasting and advisory services to industries and nations. They also publish public reports, like the Democracy Index.

The Index is based on five variables, each rated on a scale from one to ten: pluralism and electoral process, civil liberties, functioning of government, political participation and political culture. Spain does worst in the last three. In the overall ranking, the country comes 19th, the last among the "full democracies". Norway heads the list with 9.87 points.

It's worth saying that the "flawed democracies" include Italy, Japan and the USA (7.89 points each) and France (7.80 points), each for different reasons: Italy for the poor functioning of its government, Japan for low political participation and France for its political culture.

The authors are clear on the reasons for the drop: the Spanish government's repressive treatment of the independence movement. "The national government’s attempt to stop by force Catalonia’s illegal referendum on independence on October 1st and its repressive treatment of pro-independence politicians have put it at risk of becoming a 'flawed democracy'," they write under the subheading "Spain's democratic credentials suffer".

"After a unilateral declaration of independence by the regional parliament, the national government temporarily suspended Catalan home rule. Several pro-independence leaders have been jailed on remand and face serious criminal charges and 30-year prison sentences if found guilty", they add in summary of the political situation.

If Spain continues on the same lines, in 2018 it could drop category and join the "flawed democracies", according to Joan Hoey, the unit's European director.

The "heavy-handed legalism to deal with what is essentially a democratic question or to deny a democratic vote" is "not really the sign of a government that cherishes democracy and wants to expand it", said Hoey.

Hoey also had comments about the charges of rebellion and sedition faced by vice-president Oriol Junqueras, minister Joaquim Forn and Jordi Sànchez and Jordi Cuixart: "In this day and age, in a modern democracy, to see elected politicians being charged with what seem quite archaic charges... doesn't seem to sit well with Spain's ranking as a full democracy, of which there are only 19 in the world."

The last country of the ranking is North Korea