Ten days of hunger strike: insomnia and weight loss of up to 7kg

The Catalan political prisoners on hunger strike are in good physical condition "in general terms". That was the announcement this Monday by their spokesperson, Pilar Calvo, ten days after Jordi Sànchez and Jordi Turull started their protest against the blocks by the Constitutional Court. Among the medical data, the prisoners' weight stands out: Sànchez, Turull and their colleagues Joaquim Forn and Josep Rull have each lost between 3.2 and 7kg (7-15lbs). The intention is to continue the protest indefinitely.

Specifically, Sànchez and Turull have lost five kilograms each. Rull and Forn, who started three days later, have lost 3.2 and 7 kilograms respectively. The doctors attribute Forn's greater loss to his "strong complexion". He started on 107kg and is the tallest of the prisoners (fourth from left in the photo accompanying this article). "The most difficult thing for them is nighttime, because they're starting to have insomnia," said Pilar Calvo.

The spokesperson also wanted to correct false reports that, for example, they're drinking nutritional shakes. She explained that they're drinking between 1.5 and 3 litres of water with mineral salts a day. Only occasionally have they used glucose for Turull's low blood sugar and cortisone injections for Forn's lumbago. Rull has stopped taking his medication for hypertension.

According to Calvo, a judge is following daily updates on their health which includes measurements like their weight, blood pressure and blood sugar levels. The journalist said that "they intend to continue the hunger strike" and "haven't set deadlines".

The four prisoners on hunger strike are continuing with their jobs in the prison. They are voluntary, but give them the right to one face-to-face visit a month which they don't want to lose. Turull and Rull set up and tidy the dining room; Sànchez and Forn clean it after every meal.

As for the rest of daily life, the prisoners are maintaining the same agenda of visits as ever, as well as their meetings with their lawyers to prepare their defence. They're receiving letters of support from around Catalonia and even Europe. "This support is their best nourishment," said Calvo.

Today's press conference coincided with the 70th anniversary of the Universal Declaration of Human Rights, which the four prisoners have wanted to defend in the face of the violations of the Spanish state. 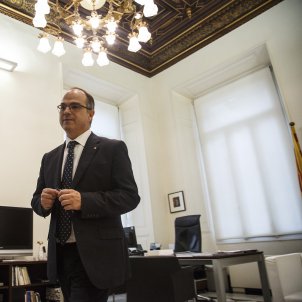 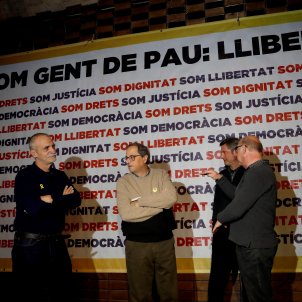