This Monday morning the operation to crown the Sagrada Família's Tower of the Virgin Mary has been completed with the placement of a twelve-pointed star at its apex, thus bringing the tower to its final height of 138 metres, a level that will only be surpassed by the 172.5 metres of the yet-to-be completed Tower of Jesus, the highest tower of the 18 which are planned for Antoni Gaudí's temple.

With the star in place, its official opening and lighting-up is pending, an event which will take place on December 8th, celebrated in Catalonia as the Day of the Immaculate Conception, with festivities that will culminate with the switching-on of the star's illumination, a moment that will change the night-time skyline of the city of Barcelona. 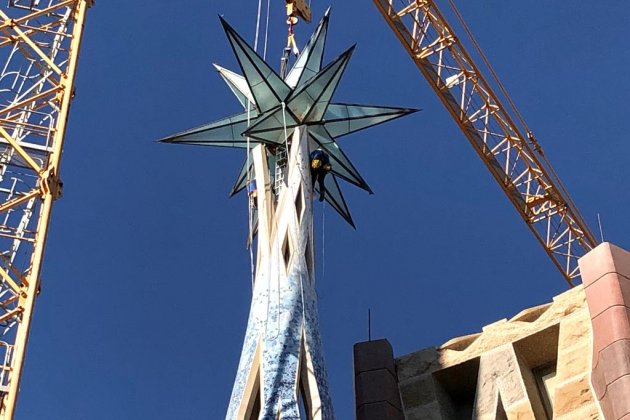 The star was lifted into place this Monday morning / @sagradafamilia

As was announced on November 8th at the presentation of the new tower by the Cardinal Archbishop of Barcelona, ​​Joan Josep Omella, once the new Virgin Mary tower is illuminated, it will become "a new star for the city that will change the profile of the city of Barcelona forever”. The intention is for the star to be a "guide" that is always visible, as during the day it will reflect the sun's rays and, therefore, will take changing forms according to the time and the weather, and at night, its light will be always white, powered by LED illumination.

However, the lighting-up of the star faces opposition from within the neighbourhood, as both the local residents' association and the association for those affected by the on-going construction of the Sagrada Família temple make the point that the star's illumination will cause light pollution, in addition to considering that from an aesthetic point of view, it will be "a horror".

The residents' groups have called for the works to be halted until there is clarification on aspects such as the intention to return to the pre-pandemic volume of visitors, which, in 2019, reached a total of 4.5 million annual visits, or an average of 15,000 people a day, figures “totally unsustainable given the physical capacity of the area”, and the future of the homes of nearly 1,000 families living on Carrer Mallorca and affected by urban planning in relation to the religious monument, a situation that "the city council is not clarifying”.

In any case, the Sagrada Família's plan is to ceremonially switch on the lighting of the Virgin Mary tower on December 8th, with a series of activities that will include celebrations of Catalan popular culture from 10:30am, with groups from the Sagrada Família district taking part, as well as third sector organizations, among others. 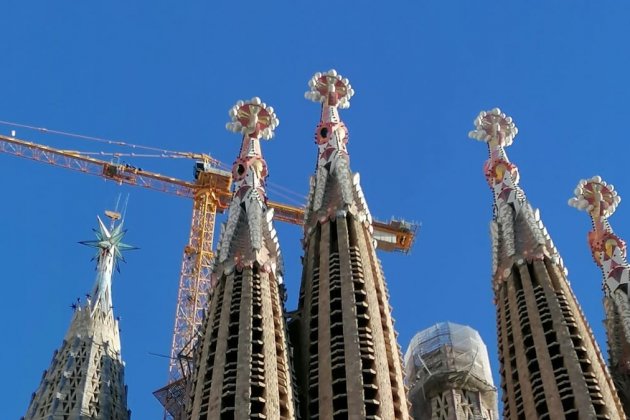 In the afternoon, a mass celebrated by Cardinal Omella at 6pm will begin the liturgical acts, which will continue with the blessing of the tower at 7:30pm and the lighting of the star at 7:40 pm.

A resident's tweet showing the evolution of the skyline of the Sagrada Família over the last three decades. Today, construction is mostly funded by tourist visits.

Main image: The twelve-pointed star is now in place atop the Tower of the Virgin Mary / @sagradafamilia