JxCat trusts its campaign to human drama and the "Puigdemont effect" 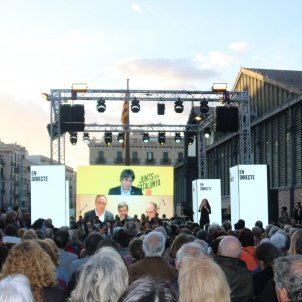 The site chosen, Barcelona's El Born esplanade (under the flag planted six years ago by then-mayor Xavier Trias and now-president Quim Torra) hinted at what was to come. Junts per Catalonia was going for scale and emotion to end its campaign for Sunday's Spanish general election. The essential ingredient: a live link with its three candidates in prison, heads of the candidacy lists for Barcelona, Jordi Sànchez, Lleida, Jordi Turull, and Tarragona, Josep Rull. Then, from their prison they were able to communicate with Belgium and Carles Puigdemont, and the square became even more electric. All four on the same screen, all with the same message: the tactical vote to support the 2017 referendum, to support Puigdemont, to support unity and liberty and to oppose the repression is JxCat.

Normally, the party's candidates would close such an event; today, the anomaly which has characterised this election of candidates in exile and prison meant they opened it. The prison required the connection to be cut off at 8pm. They were introduced by Susanna Barreda, Sànchez's wife, who read words the president had written in an interview with ElNacional published today (link in Catalan). In response to the last question, "what is the first thing you'll do when you leave prison?", he responds "breath deep and cry". Sànchez, Turull and Rull took the floor from the same room where, moments earlier, Junqueras and Romeva had connected with the closing rally of ERC's campaign.

"We'll reply on Sunday", said minister Jordi Turull, referring to Cs and PP's attempts to block Puigdemont from standing in May's European election. As in all their public appearances during the campaign, Turull and fellow minister Rull appeared with the pins corresponding to their former office on their lapels. Between them was Sànchez, with a yellow flower instead.

Sànchez pushed for turnout at the ballot boxes: "it will do no good to regret it at half eight at night, when the polling stations are shut". "Rarely", he said, "have you heard me ask for anything for me, but today I'm daring to: those who believe in freedom, those who believe that what we're living through is an injustice, please use the ballot boxes again, fearlessly, with no complexex. We promise to speak clearly, as we've done before prosecutors". If they do so, and vote for JxCat, he said "we'll be in the Congress defending Catalonia, unity and self-determination".

When he could speak, a visibly moved Puigdemont had words for his colleagues in prison: "We have to vote for you so that you can collect your certificates of election. You'll look them in their eyes and you'll see how they look down one by one". 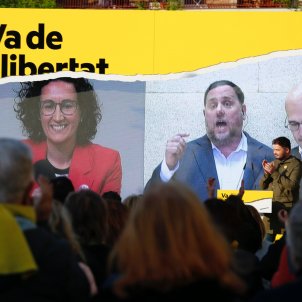 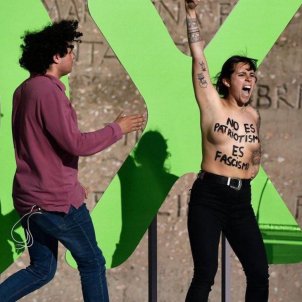 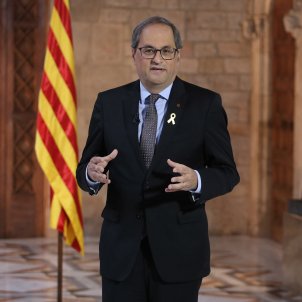 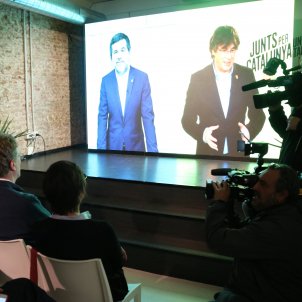