An Italian woman has been charged with attempted murder in Barcelona for allegedly setting fire to a Guàrdia Urbana police van in the Rambla on Saturday night. The weekend incident marked a new upsurge in the violent street unrest and protests which began two weeks ago after the imprisonment of rapper Pablo Hasél. The woman is to be handed over to judicial custody this Tuesday along with seven other 'anarchists' who were arrested at the weekend, in a group of predominantly Italian nationality.

According to the police, the young woman was arrested further uptown in Barcelona after spraying flammable liquid on the van to set it on fire in the city's famous pedestrian boulevard, and she is to be brought before the judge accused of attempted murder, as ElNacional.cat has been informed. The investigations that have been carried out, with the analysis of the images, allow the Catalan Mossos d'Esquadra police to charge her with this serious crime.

At the time that the woman allegedly sprayed the accelerant on the police vehicle, there was an officer in the driver's seat, who was able to escape the fire via the passenger's door and was unharmed. Given the fact that the officer was clearly visible seen from the outside, the Mossos believe that attempted murder is an appropriate charge.

The Mossos d'Esquadra have requested information from Italian authorities on whether the Italian protesters arrested, who are said to have a "high level of organization", have a criminal records for anti-system or anti-police violence in Italy.

In addition to the Italian woman, a French woman is also among those who were arrested in Saturday's riots. In total, there are eight people from this clearly politicized group with an anarchist tendency: six of Italian nationality, one of French nationality and one of Spanish nationality, as ElNacional.cat reported on Saturday, minutes after the incidents. 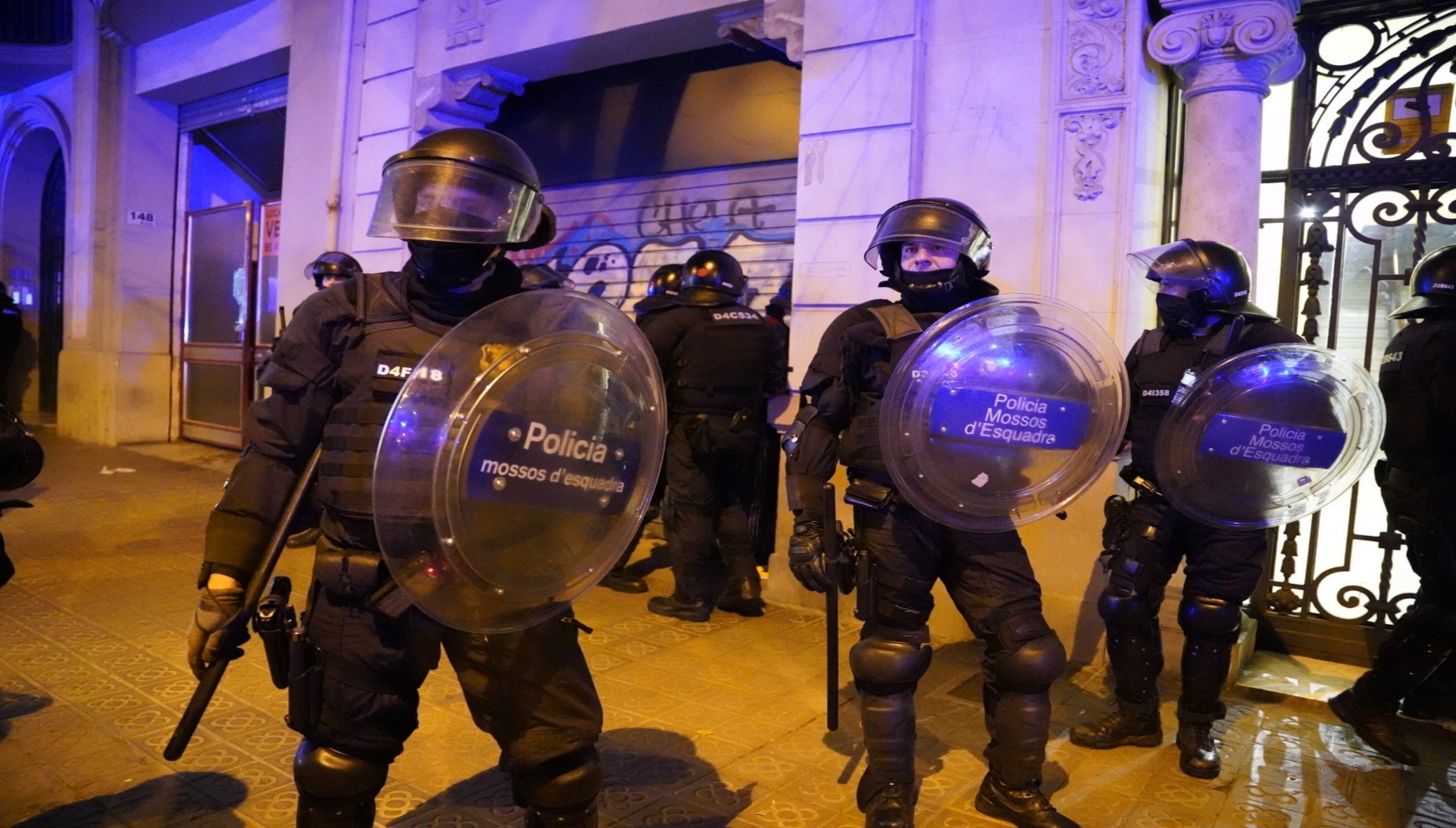 The Catalan police describe the arrests made on Saturday as "very significant" in that they are believed to have been key individuals responsible for the organization and materialization of the serious incidents that have taken place in recent days in the city of Barcelona. The Mossos are continuing to investigate the activities of the members of the group in order to present the judge with a complete inventory of the incidents that they were allegedly involved in on Saturday.

Searches in squat houses in the Maresme

This Monday morning, Mossos officers searched two squat houses in the coastal towns of Mataró and Canet de Mar, north of Barcelona, where the arrested anarchists had apparently stayed.

The operation was ordered by the judge handling the case of the riots in Barcelona and started in the early hours of the morning. The Mossos confiscated material from the two houses and part of the search was carried out with the presence of the people arrested on Saturday, but no new arrests were made. However, in one of the buildings searched, objects were found that may be related to the incidents, and these will now be analyzed.

In the hands of the court

After spending three nights at the Mossos police station, on Tuesday the eight individuals will appear in court, where the duty judge will hear the Mossos' account of the events as well as the arrested persons' testimony, and could order their release or continuing custody.

Given that they are of foreign nationality and without a known fixed address in Catalonia, judicial sources say that it is possible, if requested by prosecutors, that the judges may remand them to prison. Another six people arrested on Saturday, unrelated to this group, have already been released. They are accused of theft and looting, and the police do not link them to this anarchist group. 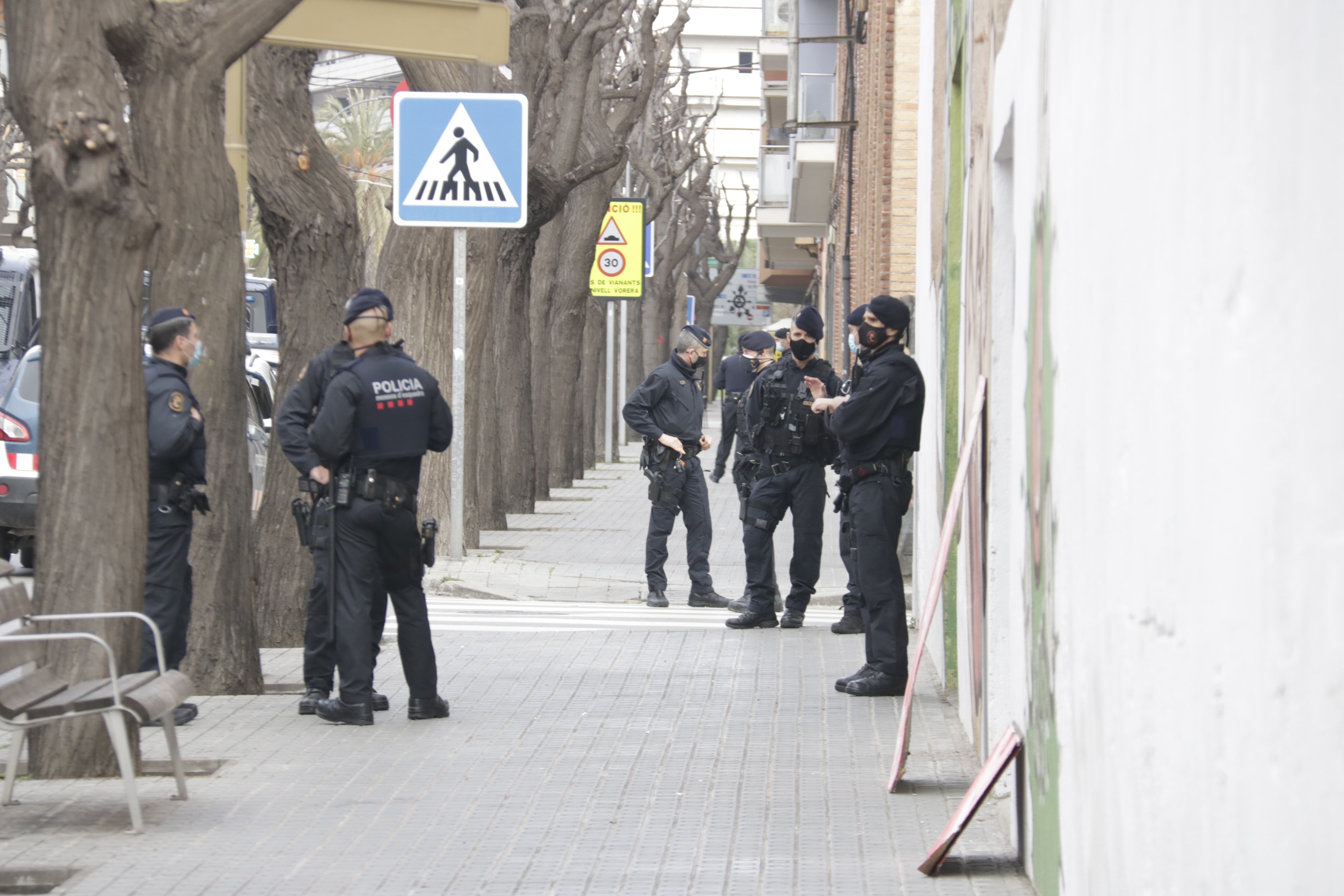 Mossos outside the squatted building in the city of Mataró / ACN

This Monday the Catalan Police Union (SPC) has also laid a complaint of attempted murder against those arrested for Saturday's riots in Barcelona in the demonstration against the imprisonment of Pablo Hasél. Again, the SPC put the emphasis on the fire of the police van.

In addition to the attempted murder accusation, the union also claims that members of the group are responsible for arson, assault on law enforcement officers, hate crimes, public disorder and criminal organization. The union believes that they could be charged with terrorism, based on the jurisprudence used in the Basque Country against groups involved in street violence, the so-called kale borroka.

freedom of expression The arrest of Pablo Hasél Gemma Liñán