Puigdemont sees Catalan election as "second round" of the independence referendum 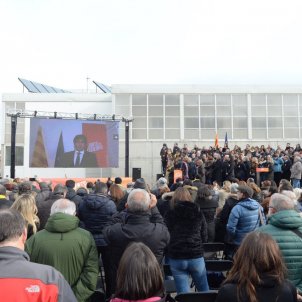 Catalan president and head of the Junts per Catalunya (Together for Catalonia) electoral list, Carles Puigdemont, has said this Saturday that they're facing "the 21st December [Catalan election] as the second round of the 1st October [independence referendum]". He made the comments during the presentation of the candidacy at Sant Julià de Ramis, the village in the north of Catalonia where his house is and which saw one of the first attacks during the referendum. Puigdemont gave his speech by video from Belgium.

"We haven't given up. We're facing the 21st December as the second round of the 1st October to achieve another victory for the democratic and peaceful path", he said, adding that it "is the only way to move forward".

The president also said that the election has to lead to "a rectification of the policies which strangle our economy and which want to break our social cohesion", after the Spanish government's intervention in Catalonia's finances and the application of article 155 of the Spanish Constitution. He also called for people to "persist to achieve a better country" and to do so "together". "On 21st December, we will remind the [Spanish] state that this people is more alive than ever and with more hope and hunger than ever to construct its future, free," he said.

The candidate asked for the elections to be used to "guarantee the freedom of all citizens without exceptions" and said that the independence movement hasn't "given up".

As for the Junts per Catalunya candidacy, he said that it represents "the diversity which is the most similar to the diversity of our country" and said they are those who "came together to defend democracy, freedom and peace".

Translation: We're here in Sant Julià de Ramis because of what happened on 1st October. We have memories and dignity. On 21st December, democracy will win and Junts per Catalunya with President Puigdemont...

This is the first event of the pre-campaign in Catalonia in which Puigdemont has appeared via a screen, after the presentation of the list last Saturday in Bruges.

The president has now been in Brussels for over a month awaiting for a decision on the European Arrest Warrant issued by Spain against him and over which he has to appear before a Belgian court on Monday, the same day the election campaign officially starts. Seeing as the president cannot, therefore, physically attend campaign events held in Catalonia, Junts per Catalonia will turn to technology to let him return, as seen this Saturday.

Also speaking at today's event were Gemma Geis, head of the Girona province list for Junts per Catalonia, Eusebi Campdepadrós, head of their Tarragona list, Josep Maria Forné, head of their Lleida list and Puigdemont's succesor as mayor of Girona, Marta Madrenas. 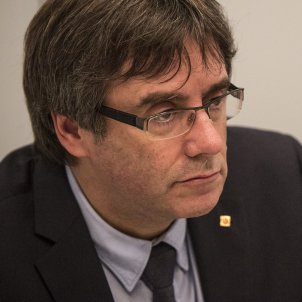 Interview Puigdemont: "On Catalan election day we will defend the legitimacy of the Republic" Marta Lasalas 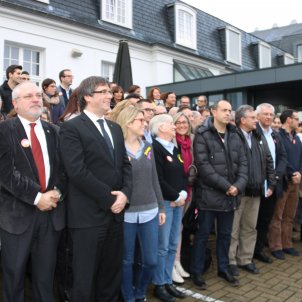 Catalan Election Puigdemont: "Now we need to be activists for Catalonia" Marc Bleda