Belgian prosecutors ask for Puigdemont and ministers to be extradited

Catalan president Carles Puigdemont and the four ministers with him in Brussels, Toni Comín, Meritxell Serret, Clara Ponsatí and Lluís Puig have today appeared for an hour before a Belgian judge who will not decide on their extradition to Spain until just days before the 21st December Catalan election. During the hearing, neither the president, nor any of the ministers were questioned.

Belgian prosecutors have asked for extradition. The crimes of misuse of public funds and corruption were discounted during the hearing whilst the crimes of rebellion and sedition were recast within the crime of coalition de fonctionnaires (literally, "coalition of civil servants") in Belgian law, which entails 6 months in prison. The crime is defined as an uprising against the powers that be, according to Belgian justice sources.

Now the defence have 17 days to prepare their case and present it. The judge will has set the next hearing for 4th December. After listening to the defence case he will then have between 8 and 10 days to make his decision, so it will come in the middle of the election campaign for 21st December. Once the judge has decided, the defence can appeal, starting a legal process which could last up to 3 months.

The five Catalan officials arrived at Brussels' Palais de justice shortly before 2pm, the scheduled time for the hearing. Despite the great media expectation, none of them were seen arriving. The president and ministers arrived by car directly into the building's car park. They were accompanied by their lawyers and a Flemish interpreter. 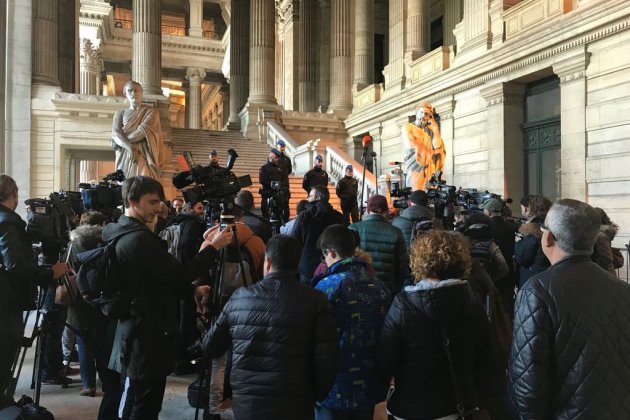 They appeared in the Council Chamber, the first instance court which will have to decide on the "background" of the European Arrest Warrants Spain's National Audience court has given for the five.

The Belgian prosecutors' office didn't want to give any details after today's hearing to not interfere in the legal process taking place behind closed doors. They also announced they will make no further comment until after the 4th December in a statement released to the media in 4 languages, including English:

The defence council of Catalan president, Carles Puigdemont, and the four ministers with his in Brussels, will present their contentions on 4th December. The defence's stategy is to say that Spain's arrest warrants don't clarify the alleged crimes, rather that it's an act of political revenge.

The lawyers believe that the judge will have to reject the warrants because the National Audience court doesn't ascribe any "punishable" action to them, according to Flemish newspaper De Standaard.

The warrants from Spanish authorities, which are identical for all five politicians, refer to five violations of the Spanish penal code: crime committed by a public official, disobedience, rebellion, mutiny and misuse of public funds.

Spain "doesn't consider any individually punishable event, rather only their political decisions, which everyone knew about and for which they were democratically elected". "As such, they are only charged for their political opinion. The Belgian judge has to reject their extradition," concluded the lawyers.

On Sunday 5th November, after the ministers handed themselves in to Belgian police, prosecutors sent them to an instructing judge to examine the "form" of the request from Spanish authorities to confirm that they conform to the law and who decreed "freedom with cautionary measures" for Puigdemont and his ministers whilst the case was under consideration.

If the judge decides to accept the extradition request, it will not be immediate. The defence will be able to appeal up to twice. First, to the same instructing judge, and then, if they reject it, to the appeals court.

This could extend the process by some 20 days. And could fall in the middle of the election campaign. If so, there would be intense legal procedure with less than a fortnight to go to the elections, with some candidates facing the threat of prison.

But if they can justify that there are exceptional circumstances, the process could take up to 60 or even 90 days.

If, despite the appeals their lawyers might present, Puigdemont and the ministers are eventually sentenced to extradition, they would be taken directly to Madrid. First to a police station for the formal hand-over, then to the National Audience for their first declaration and to set cautionary measures, as happened with vice-president Oriol Junqueras and the other ministers.

If they arrive in Madrid in the afternoon it's likely that they will have to spend a night before their appearance before the National Audience in the cells of the police station.

Nor is it clear that they will be interrogated by judge Carmen Lamela, who is instructing in the case. Puigdemont and the ministers will fall under the responsibility of whoever the duty judge happens to be when they arrive in Spain. If that's not Lamela, she won't question them. And the police cannot make them wait in the police station until she is on duty. It will be different if they happen to coincide with Lamela's timetable or there's a change of shift.

In the case of the vice-president and the other ministers, the prosecutor presented their lawsuit when the judge who had already sent Jordi Sànchez and Jordi Cuixart into preventive detention was on duty.

The other possibility is that, if the Belgian judge decides on extradition, Puigdemont and the ministers' lawyers will not present an appeal and opt for the "Forcadell path", after Carme Forcadell, the speaker of the Catalan Parliament.

In other words, they could decide to declare before the National Audience court, and do so along the same lines as the speaker, saying that the declaration of independence was "declarative and symbolic" and that the approved decrees were not applied. The idea would be to get some similar cautionary measure of remand with bail so they could be free during the election campaign.