A prisoner and a returned exile in the Spanish Senate

Whilst his fellow political prisoners were taking their seats in the Congress, Raül Romeva was entering Spain's Senate chamber with his head held high and wearing a smile from ear to ear, an attitude which contrasted sharply with the treatment he received from some quarters inside.

The senator and political prisoner entered the building at 8:20am under the custody of the Civil Guard, having arrived from Soto del Real prison. Until 10am and the start of the session, he was then locked in a room and not allowed to see either his party colleagues or his partner Diana Riba. "It seems like a prison, not a legislative chamber," people close to him said.

In fact, Romeva was unable to see his partner before the start of the session. They ended up engineering a two-minute meeting when he went to the toilet. Riba, who is standing as a candidate to the European Parliament for ERC, denounced this "lack of humanity", believing it outrageous they shouldn't be able to see each other for even only five minutes. At the end of proceedings, however, they did manage to meet again in the chamber itself. 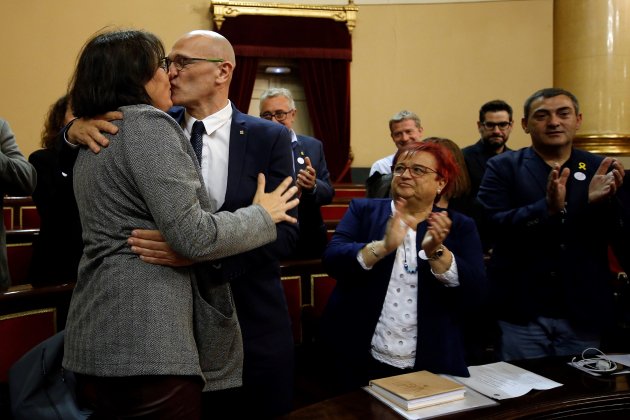 Another notable new senator, in his case representing Girona, was Josep Maria Matamala, the business person and close friend of Carles Puigdemont who had accompanied the president during his exile. He had returned to Catalonia just a week ago and is still under investigation by Spanish authorities in terms of what support he might have given Puigdemont.

Meeting in the chamber, they embraced and Matamala was able to hand deliver a letter the president in exile had given him for Romeva. 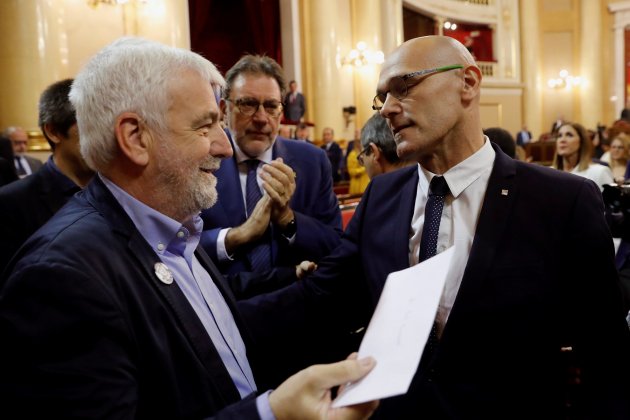 As in the Congress, the freedom of choice of the wording of the oath of office sparked controversy. The tension reached its peak during Romeva's turn, who was cut off by the fourth secretary of the Senate's Board, Rafael Hernando (PP) calling for the next senator to come up.

Romeva's words which so incensed Hernando were, in Catalan: "Until the proclamation of the Catalan republic and always committed to freedom, equality and fraternity, as a political prisoner and due to legal imperative, I promise". The other pro-independence senators all used the opportunity themselves to make similar statements. They received loud booing for their choice, especially from PP's benches, and the odd shout of "Viva España".

The other important item of the day was the nomination of the Senate's new speaker and presiding Board. Catalan Manuel Cruz, PSOE's second choice after the Catalan Parliament blocked Miquel Iceta last week, was elected speaker with 140 votes in favour, a margin of 13. His opponent, Cs' Ruth Goñi, got 11 votes. 84 votes were blank and 15 ballots were spoiled, for example ERC wrote "freedom" on theirs. When the result was announced, most of the Catalan senators from pro-independence parties, except Marta Pascal, avoided applauding. Romeva, however, did go up to Cruz afterwards to congratulate him. 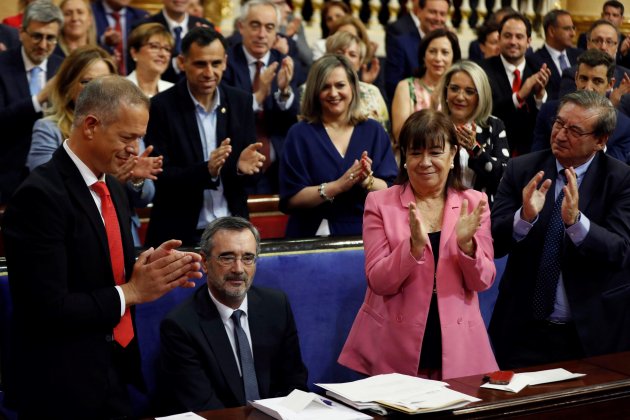 In his acceptance speech, Cruz called on all the parties to set their sights high for a more influential Senate. He committed to listening to and negotiating with parties of all ideological positions "from respect for the constitutional framework". 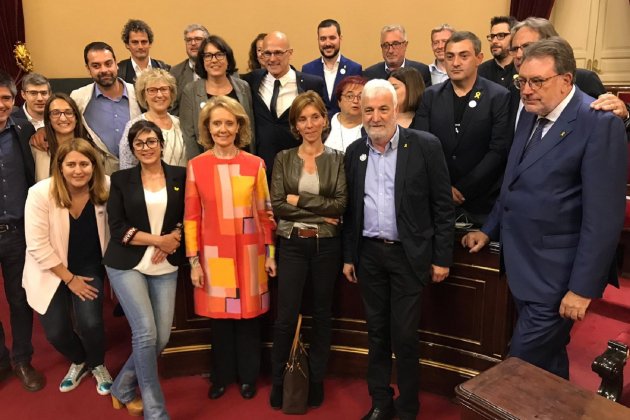 At the end of the session, all ERC and JxCat's senators, along with the representatives of the Catalan government present and Diana Riba, were able to gather in the centre of the chamber for a photograph. Then, the National Police guarding Romeva took him away back to Soto del Real prison.