Germany's growing interest in Spain, and the Catalonia-shaped stumbling block, per 'FAZ'

Germany's second-largest daily paper, Frankfurter Allgemeine, has published a report (in German, paywall) on Germany's increasing strategic interest in Spain, in the shadow of Brexit. In this regard, they say there is regret that Spanish prime minister Pedro Sánchez hasn't moved towards a solution in the conflict with Catalonia.

"Germany would like to see Spain as part of the 'hard core' of a smaller EU: With PM Pedro Sánchez the right man is in office on the Iberian peninsula, but his power is limited," reads the story's lead. The article, entitled "How Merkel is courting Spain in light of Brexit", quotes German foreign minister Heiko Maas, who recently said that Germany and Europe need "more Spain".

"The German government is courting the fourth-largest Eurozone economy which, in light of the upcoming Brexit, should become part of the hard nucleus of the EU. Berlin's increased interest in Madrid isn't only related to the UK's exit from the EU. The French president, Emmanuel Macron, has internal political battles to fight, and in Italy there's an erratic, populist coalition in government," the paper's Madrid correspondent writes. 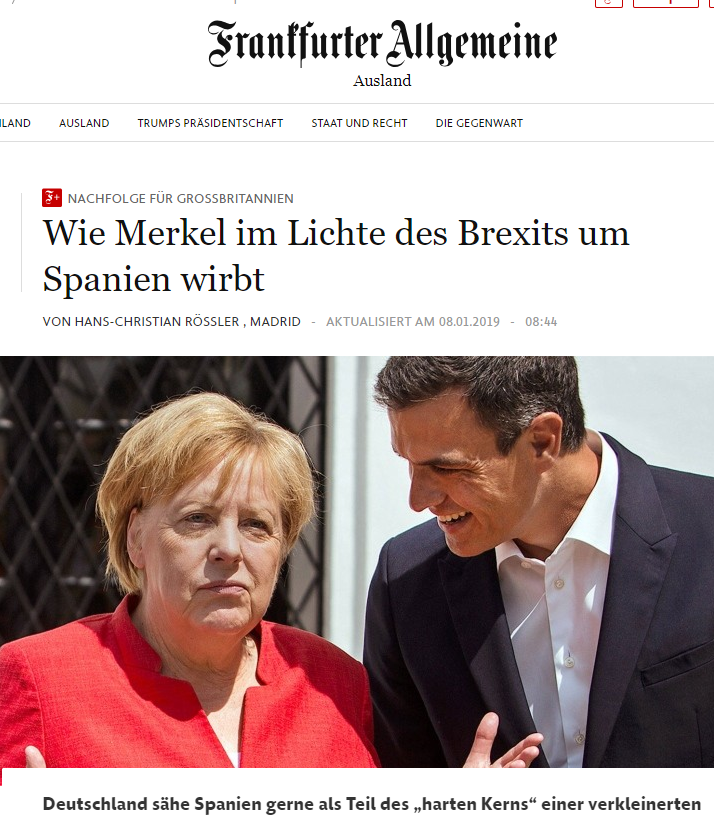 According to FAZ, Sánchez is more active in international politics than Mariano Rajoy was, but that this isn't always smooth sailing: "in Brussels in November, the EU's Brexit Agreement almost failed over the Strait of Gibraltar.

The paper is also direct about Germany not being fully happy with Sánchez currently. Firstly, that "he hasn't got close to a solution to the conflict with Catalonia"; but also that he suffered a severe electoral defeat in Andalusia​, leaving an empowered far right and uncertain consequences for Spanish politics.