Now, three days later, there are four of them. Joaquim Forn and Josep Rull, respectively interior and territory ministers in the Catalan government fired by Madrid last year, have joined the indefinite hunger strike started on Saturday by their colleagues Jordi Sànchez and Jordi Turull, El Nacional has learnt. All four are being held in pretrial detention in Lledoners prison.

The possibility that more of the political prisoners would second the decision by Sànchez, former president of the Catalan National Assembly, and Turull, former presidency minister, was suggested on Saturday when the action was announced by lawyer Jordi Pina and doctor Jaume Padrós.

Forn and Rull announced their decision through a formal statement in which they denounce the "unjust and arbitrary behaviour of the Constitutional Court".

The two politicians also posted identical statements on Twitter, reading: "I'm adding myself to the hunger strike. It's a thought-through decision. When they make you serve a sentence before trying you, you're left with few means to cry out against such great injustice. This is one of them. I'm using it with full awareness and responsibility".

Sànchez and Turull have started their hunger strike, without specifying how long it might last, in protest over the delays by the Constitutional Court over their appeals, which is preventing them from turning to the European Court of Human Rights.

More than 190,000 people have expressed support for the prisoners on hunger strike and their claim through the website vagadefam.cat. The site includes the statement from the prisoners denouncing the Spanish court's attitude.

The announcement by Sànchez and Turull came just after the first photo of the male political prisoners emerged: the four named above as well as vice-president Oriol Junqueras, foreign minister Raül Romeva and president of Òmnium Cultural, Jordi Cuixart. All of them are in pretrial detention for their roles in last year's Catalan independence referendum. 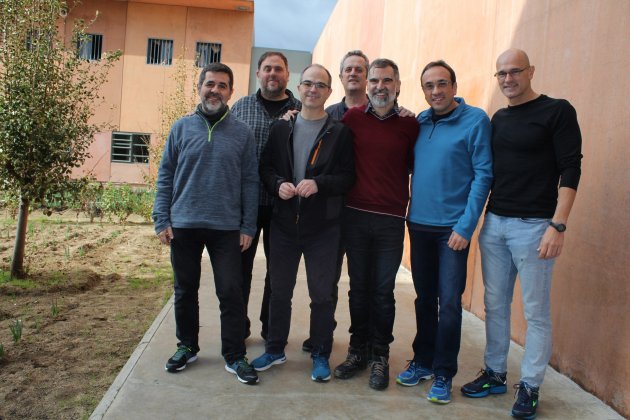 The former speaker of the Catalan Parliament, Carme Forcadell, and the labour and families minister, Dolors Bassa, are being held in Mas d'Enric and Puig de les Basses respectively.