The CUP defends the referendum to "sweep out capitalism, corruption and monarchy"

The CUP (Popular Unity Candidacy), Arran (the youth wing of CUP), Endavant (the Socialist Organisation of National Liberation, also affiliated to CUP), and other sections of the pro-independence left, have jointly presented this Thursday their campaign 'Escombrem-los!' ('Sweep away!') in which they claim the celebration of the referendum as a "starting point" to build a "socialist, feminist and ecologically sustainable republic".

The campaign insists on 1st October referendum as a tool for "a new model of relations" against the "unequal, misogynistic and patriarchal powers" represented, they consider, by personalities such as the ex-presidents Artur Mas, Jordi Pujol or King Felipe VI.

The poster of the campaign. Photograph|Photography: M.C

For that reason their campaign poster shows a female protagonist, representing job insecurity, sweeping up the representatives of "capitalism, patriarchy, corruption and the monarchy". Among them are the ex-presidents, Mas and Pujol, as they are associating them with the 3% commission scandal and the Palau case (the Palau de la Música corruption scandal), and the Spanish prime minister, Mariano Rajoy, with an envelope of money, referring to the slush fund 'B-box' of his governing PP (Popular Party).

The campaign poster also features the former Spanish prime minister, José María Aznar, with a missile with blood in his hand, and King Felipe VI and his sister, Cristina de Borbón, related to the Nóos corruption case.

Graphically, the campaign poster of the pro-independence left reflects the imagery of classical Soviet posters, in particular one where Lenin appears to be sweeping away Tsarism, the bourgeoisie and the church. 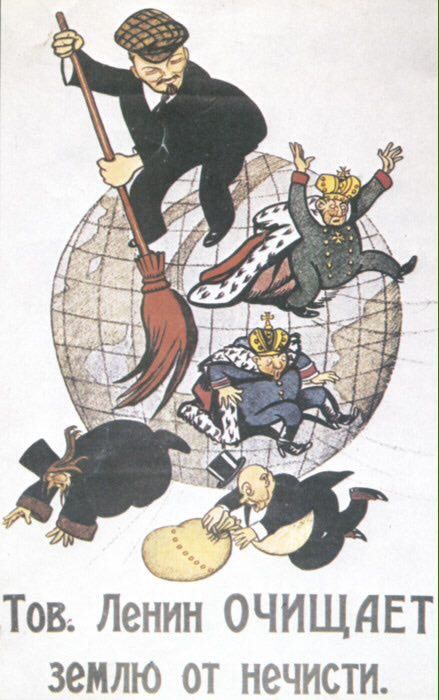 As included in the motto of the campaign, the pro-independence consider disobedience to be a fundamental tool to achieve the new republic. "The Spanish state has important weapons and only disobeying its impositions will it be possible to accumulate the necessary force to construct a fairer republic," said Laura Gisbert, the spokeswoman for SEPC (Union of Students of Catalan Countries).

"It is not true that the process will not be conflictive and that it will not go from law to law," she added, in relation to the allusions of the Catalan government and the laws of disconnection that the Parliament must approve, which, as they have assured, would give legal protection to the referendum.

Another key point of their campaign, as the motto shows, is the defense of self-determination not only from a national viewpoint, but with regards the "ability to decide for yourself without any interference". It is for this reason that, from the pro-independence left, they claim the creation of a "popular and basic" constituent process subsequent to the celebration of the referendum, and which would serve to build a "socialist, feminist and ecologically sustainable republic", said Mar Ampurdanès, the spokeswoman of Arran.

The pro-independence left makes these demands within the framework of the creation of the Catalan Countries alongside the "structure" of the Mediterranean that it "twins".

The answer to Rajoy

Although during the presentation of the campaign the representatives of the groups did not want to make any political declarations, the deputy of the CUP in the Catalan Parliament, Anna Gabriel, replied to the statements made by the Spanish prime minister this Wednesday, where he asked "to isolate the radicals". "What would be surprising is if Rajoy made intelligent statements at some point," she said.

Regardless of this new campaign, the different groups will continue to carry out their own actions. From Arran, they have assured that they will continue with the campaign "of activism and mobilisation" against tourism, and the CUP will continue to defend the referendum at its own events.