Catalan independence movement returns to the streets on referendum anniversary 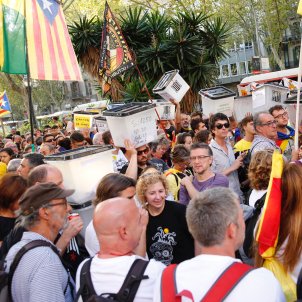 One year after "1-O" the 1st October Catalan referendum, the independence movement has again demonstrated that it's not giving up and has taken to the streets to call for the republic. Some 180,000 people, according to Barcelona's Urban Guard, have again taken to the centre of the city to defend the legacy of the vote and demand the government to implement the republic.

The demonstration, organised by the 1st October platform, started at plaça Catalunya before heading to plaça d'Urquinaona and along carrer Trafalgar. It then went down avinguda Lluís Companys to end up outside the Catalan Parliament. The march, under the slogan "let's recover the 1st October", had a festive atmosphere, but also saw anger from some sectors of the independence movement over the non-implementation of the republic.

The head of the demonstration was formed by 11 people of different ages, from different places around Catalonia, carrying ballot boxes used last October. They were met by president Quim Torra and the Parliament's speaker, Roger Torrent, whom they gave the ballot boxes to as a symbol of their mandate. At this point, some boos could be heard from protesters.

The chants heard most often during the demonstration were "independence", "1-O, neither forgotten nor forgiven" and "release [the] political prisoners". That said, shouts could also be heard of "Buch, resign". This became more frequent the closer they got to the Parliament, joined by other criticism of the government, Parliament and pro-independence parties.

The protest from part of the independence movement against interior minister Miquel Buch over the charges by Catalan police on Saturday at another demonstration joined other criticisms for the failure to realise the republic.

Outside the Parliament, thousands of people called for not only Buch, but also president Quim Torra to resign. By the end of the demonstration, the most frequent shouts had become "the Parliament hasn't done its job", "let's occupy the Parliament" and "the people lead, the government obeys". Some demonstrators also called for a general strike and disobedience.

This afternoon's demonstration followed a morning of rallies, including thousands of students walking through the streets of Barcelona and a ceremony involving the entire government in Sant Julià de Ramis. 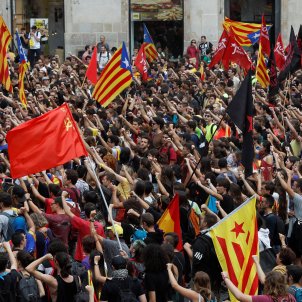 1st October, one year on Thousands of students call to "recover the streets" and realise the Catalan republic Gisela Rodríguez 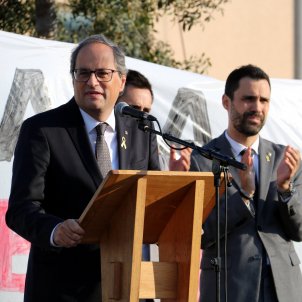 1st October, one year on Torra, at referendum commemoration: "You put the pressure on" Marta Lasalas 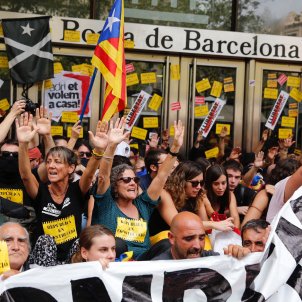