Silence. That silence that filled the Rambla in the days following the 2017 terror attacks on Barcelona and Cambrils has this Saturday returned to the city's pedestrian artery. Two years later, victims and relatives returned to the point where the van driven by Younes Abouyaakoub came to a halt after his murderous rampage which took 13 lives. The tears also returned. Today's homage, on the second anniversary of the attack, also served to add a new demand on behalf of the victims: to know the truth of what happened. 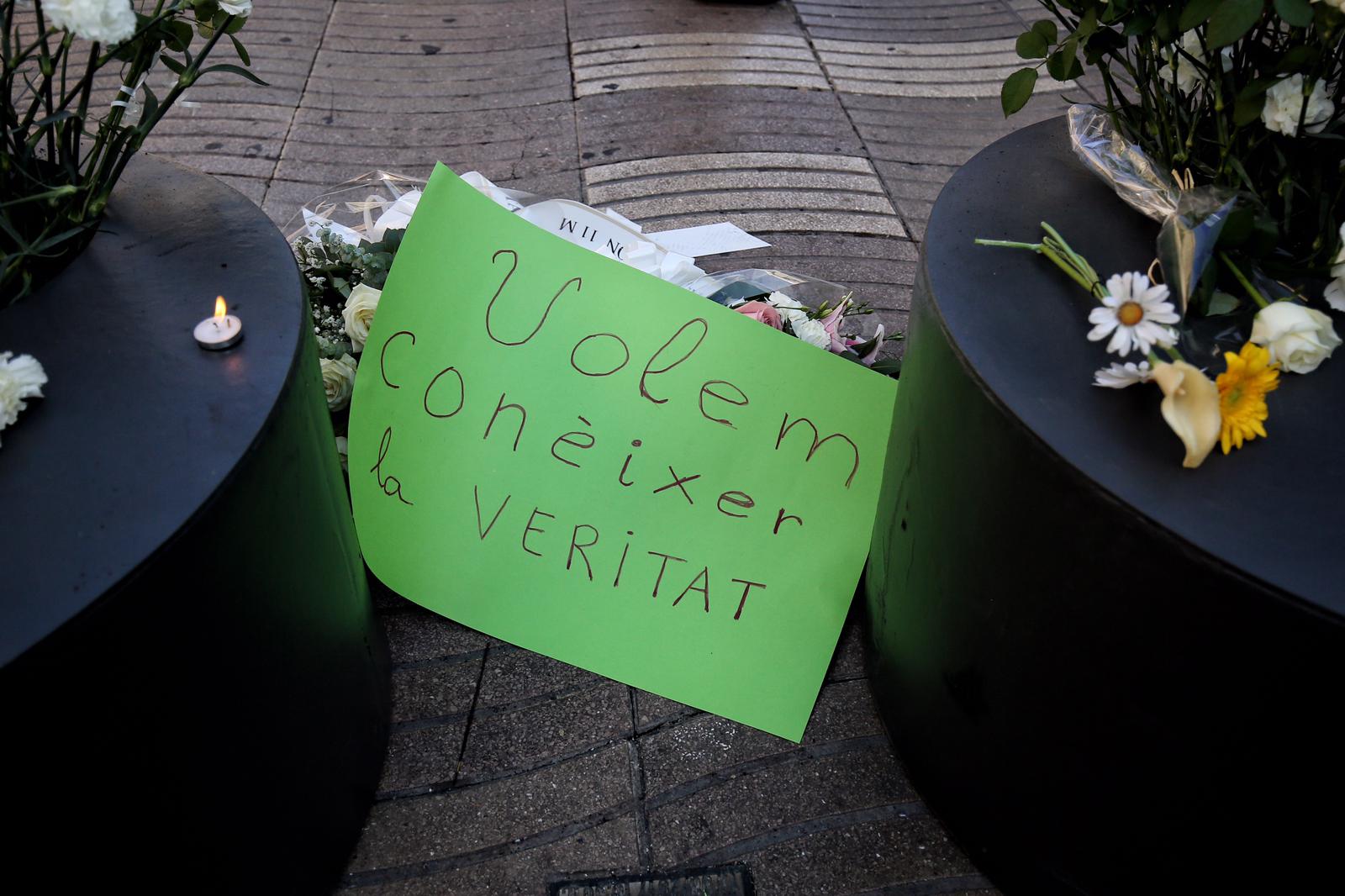 This Saturday's event, organized jointly by the Barcelona city council and the Unit for Attention to the Victims of Terrorist Attacks, was brief and restrained, as requested by those affected. No speeches, and with politicians kept in the background. At 10am, the serene notes of the Cant dels Ocells began to sound, played live by a student from the Liceu conservatory. When the lullaby concluded, those present approached the four large planters installed on the Rambla, to deposit white carnations. First the victims and family members came forward, then the public authorities.

Although nothing was said, a dozen of those affected wanted to transmit a message, by wearing t-shirts calling for the whole truth of the events to be told. In fact, a hand-written placard deposited with the white carnations repeated the same idea: "We want to know the truth".

Further back, the Islamic community was also present, with its own clear message: 'Islam categorically condemns the murder of innocent people'. 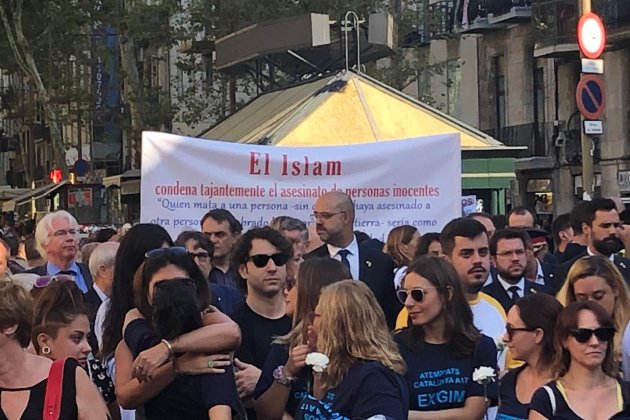 Between emotion and indignation

The Rambla mid-point where the homage took place, the Pla de l'Ós, became flooded with emotion from well before the start of the commemoration. The participants arrived and took their places long before the scheduled time for the start of the event and this meant that what was intended to be a minute of silence lasted much longer. 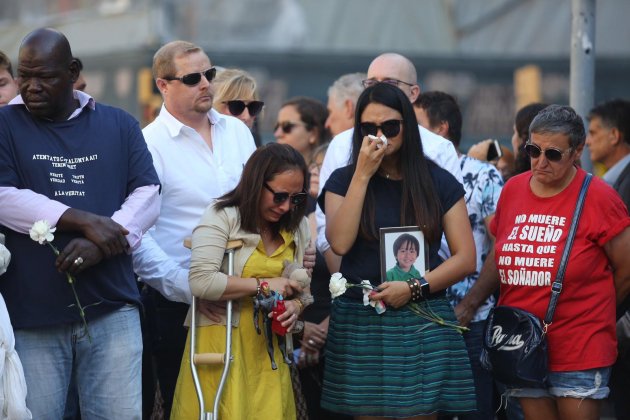 Many of the victims and relatives had not seen one another since the previous year, when the first anniversary of the massacre was commemorated. Meeting once again, they hugged and the tears flowed, and inevitably, the crying became shared.

Then, with flowers in hand, each affected person attending made their own gesture. A few wore t-shirts expressing outrage for the opacity maintained on some aspects of the attack, especially the links between Spanish intelligence and the terrorists. Others brought memories, like the relatives of the Australian boy Julian who died on the Rambla, carrying a framed picture and some of his toys.

In recent weeks, the supposed connection between the imam of Ripoll, considered to be brain behind the attacks, and the Spanish intelligence service has reemerged as a political battle. The organizers of today's act wanted to shield the victims from this and prevent the second anniversary of the attack from being overshadowed by the argument. That is why it was agreed that there would be no speeches. 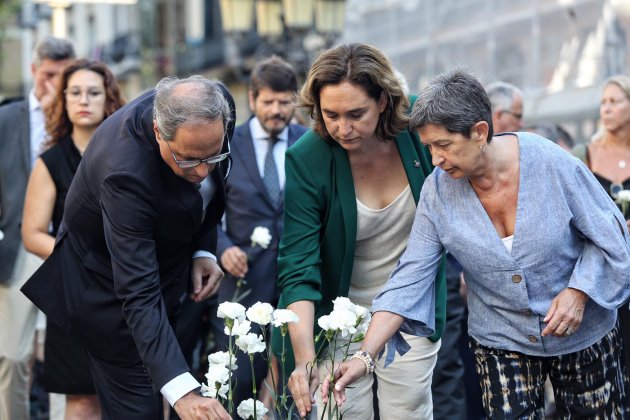 In spite of this, right wing Spanish political parties Ciudadanos (Cs) and the Partido Popular (PP) departed from the protocol and called a press conference at the end of the 15-minute homage. Cs leader in Catalonia, Lorena Roldán, called for unity and that "the victims be the protagonists." While all the cameras focused on her, the victims left for the city's administrative centre, Plaça Sant Jaume, to take part in a private reception in the city hall with mayor Ada Colau, and at the Catalan government palace with president Quim Torra. It was indeed Torra who was the target for PP deputy Daniel Serrano when he spoke to the press. Serrano accused the Catalan leader of "contributing to theories of paranoid conspiracy".

In addition to the president and mayor, the Catalan vice-president and interior, justice and presidency ministers were present. On behalf of the Spanish government, the interior minister and the government delegate in Catalonia took part.

Moments after the commemoration, the scene returned to normal: access to the central part of the Rambla was reopened and tourists flooded the avenue once again.

Although the tribute was discreet, simple and depoliticized, the Association of Victims of Terrorist Organizations (ACVOT) was not happy with the proposal and organized an alternative homage at 11:30am at the top of the Rambla. This was longer than the institutional event, it included speeches and virtually none of the 2017 attack victims were present.

ACVOT president José Vargas told ElNacional.cat that "a couple of French people and an Italian" came to the association's homage, although he didn't specify further. "Of the Spanish victims, none came," ​​he said, as at that time they were at the reception with president Torra. In this regard, he commented that the victims had been "manipulated". 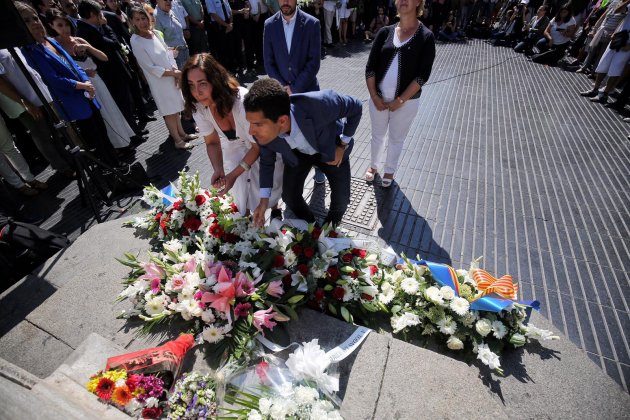 Among those who were present at this second ceremony was former Spanish government delegate in Catalonia, Enric Millo, as well as other members of the right-wing political parties PP, Cs and Vox, and police representatives from the Catalan Mossos d'Esquadra, the Barcelona city police and the Civil Guard. There were also members of the anti-independence civil group Catalan Civil Society.

In a speech in which he asserted that the second homage was not a political act, Vargas incessantly attacked the Spanish interior minister Fernando Grande-Marlaska for not wanting to attend the AVCOT event. "He is demonstrating his shamelessness and lack of dignity," said Vargas, at the same time, praising the fact of belonging to a country where "values and constitutional principles are defended - such as freedom, justice, equality and legal guarantees" rather than one where "rights and freedoms are worthless". 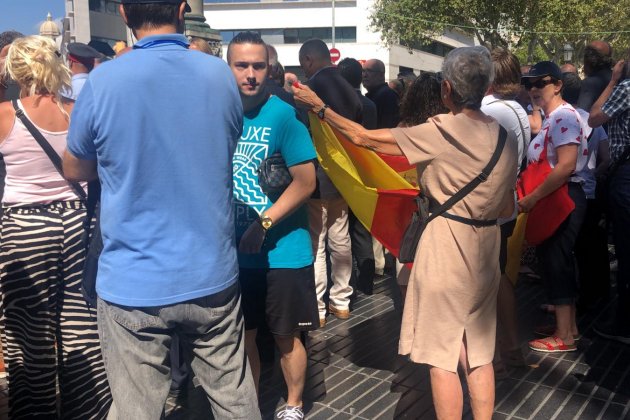 To close this alternative commemoration, the hymn of the Ave Maria sounded followed by a minute of silence, which was interrupted by a cry of "Long live Spain!" (link in Catalan). 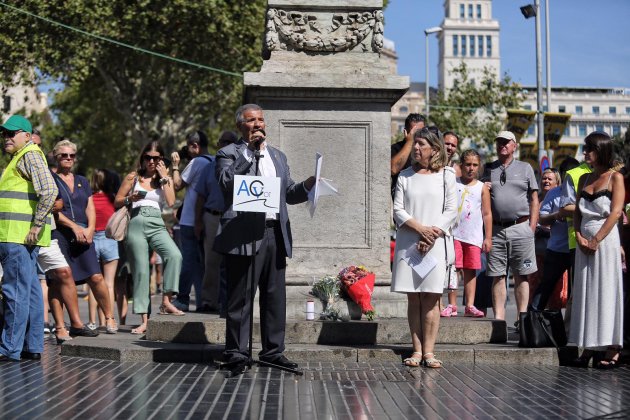