The arrest of Pablo Hasél

At first light on Tuesday morning, the police moved in and arrested the Catalan rapper Pablo Hasél. The Mossos d'Esquadra officers in riot gear entered the University of Lleida at around 7:30am to arrest the musician. A Spanish court had ordered that he must begin a prison term after being convicted for his lyrics and social media comments.

"Death to the fascist state," cried Hasél as he entered the police van carrying him to the court.

"Pablo Hasél goes to prison but with his head held high. Thanks for everything @PabloHasél, we'll get you out"

Hasél had barricaded himself in yesterday at the rectory of the University of Lleida, the rapper's hometown in the west of Catalonia. In the afternoon, a security cordon began to be formed to prevent his arrest - or at least to make it more difficult. Thus, riot police had to enter the building and get past all sorts of barriers of tables and chairs created by the support group. There was no confrontation or act of force. The riot police went into the building and reached the third floor, where Hasél was holed up, without incident. The police removed the people around Hasél, registering their IDs and letting them go.

And then they arrested Hasél. No use of force and no handcuffs

The rapper had locked himself into the university building after refusing to enter prison voluntarily and while awaiting the resolution of an appeal he made to the National Audience court to avoid entering prison. About twenty Mossos d'Esquadra vans cordoned off the area this morning to evacuate the rectory, where members of a support group were also dug in. 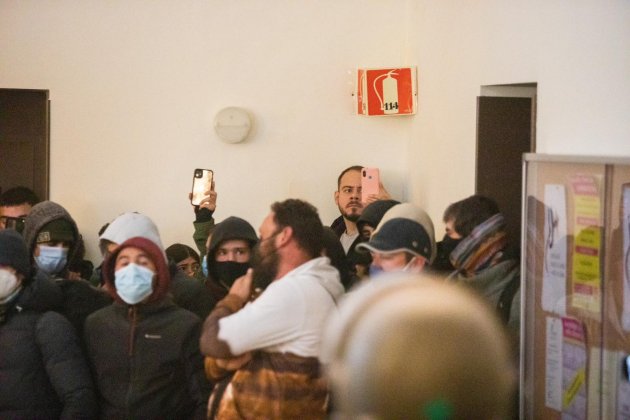 Supporters of the rapper set up barricades to prevent the entry of the police forces.

"NOW: The Mossos are entering the Rectory to arrest Pablo Hasél. His freedom is ours: LET'S DEFEND IT. We call on everyone to come to the Rectory!!"— Llibertat Pablo Hasél

Holed up in the rectory

On Monday afternoon, the Spanish court dismissed the rapper's appeal and issued an arrest warrant for him. From that moment on, any police officer or unit that detected him was obliged to arrest him. However, as it had been publicly announced that the rapper was barricaded inside the University of Lleida, it was the Catalan police, the Mossos d'Esquadra, who had to arrest Hasél, as it falls within their competencies.

The announcement of the arrest warrant provoked a rally of support last night at the doors of the University of Lleida.

On Monday, the National Audience rejected his appeal calling for his entry into prison to be suspended, after the musician had been convicted to a term of nine months and a day of imprisonment for offences of glorifying terrorism and insulting the monarchy.

In its ruling interlocutory, the court analyzed the possible conditions for suspending admission to prison, one of which is if the person has no previous convictions. With regard to this, the court ruling noted: "The first requirement is clearly not met by Hasél".

The judges noted that the sentence had already taken into account the aggravating factor of it being a repeat offence, as Hasél had previously been sentenced to two years in prison, also for glorifying terrorism: in this previous case, the court did suspend the rapper's entry into prison.

In addition, the court emphasized that his actions "do not denote the intention of the prisoner to repair, at least morally, the damage caused, but, on the contrary, he persists in his antisocial attitude," and recalled that he was also convicted of disobeying police officers and for breaking into a building.

“With this criminal history, it would be absolutely discriminatory with respect to other offenders, and also a serious individual exception in law enforcement, totally lacking in justification” to suspend Hasél’s entry into prison, ruled the judges.

On Sunday, the public prosecutors opposed the suspension of Hasél's imprisonment, after the deadline passed for him to enter prison voluntarily last Friday.

On Monday, the rapper shut himself in "indefinitely" in the university rectory in Lleida: "It's to make it as difficult as possible for the police," he said, explaining that he was barricaded in, protected by locks and chains. "We want to make as much noise as possible about a serious attack on our liberties which affects us collectively."

"It is scandalous," said Hasél, "that the prosecutors opposed my imprisonment, but since Sunday's parliamentary election they have changed their mind.

Hasél explained that he chose this emblematic building in the western Catalan city because it is "spacious" and because some of the people who have decided to show solidarity and lock themselves in with him are students at the centre.

As for the university, the governors of the UdL issued a statement yesterday at noon yesterday calling for a "quick solution" through dialogue so that the closure of the rapper and his supporters in the building would not affect the activities of students and workers of the Rectory.