Feijóo and fear in politics

It's curious how things happen in the world of politics. The rough waters Spain's Partido Popular finds itself submersed in, which are continuing to rise, have thrown overboard the hopes of the president of Galicia, Alberto Núñez Feijóo. The young PP leading light, the one wanted to lead the PP, the only one able to bring together the party, has decided to not move from Galicia and has renounced replacing Mariano Rajoy. The Santa Pola registrar1 seems to have sedated the conservative organisation after many years travelling towards nothing and squandering through inaction an absolute majority in 2011. To the point that Feijóo would prefer to guarantee himself the calm of the absolute majority he enjoys in the Galician Parliament -the one in Santiago de Compostela is the only Parliament of an autonomous community where PP still has that- and disregard the siren song sung at him.

Feijóo's renunciation is well-calculated and, at a time when an immaculate record is required, it's probable he didn't want to revive memories of relationships and photographs which have emerged periodically during his political career. Fear as a new factor in the decisions of Spanish political life. A minister, Màxim Huerta, has lasted a week in the role, in fact, five working days. The calm he governs with is completely unlike what Feijóo would have had to face in the coming months. That is, if he'd won in the end, something which everyone took for granted, but votes by party members always have their spice.

It's clear that, with his renunciation, the election of Rajoy's substitute will be much more open. Congress deputy Pablo Casado has already said that he will stand although he's dogged by the matter of his masters which is already under legal proceedings and over which a judge could even end up asking for suplicatorio2. There are also the PP's two leading ladies, Dolores de Cospedal and Soraya Sáenz de Santamaría. Casado, Cospedal and SSS are not, ultimately, very different. The three embody the party's right wing: the first, unabashedly; the second, with conviction; and the third, blushing. Aznar3 would support the first two, especially Casado, the one who has less to lose. And Margallo3, who's also in there, doesn't appear to have a chance but would join with anyone who was against the former deputy PM.

Maybe, instead of a congress, we'll witness a tragedy. All in its time.

1. Mariano Rajoy is expected, now he has resigned as a Congress deputy, to return to a job he held twenty years ago as property registrar in Santa Pola, a small town near Alicante.

2. Suplicatorio is, in Spanish law, when a judge asks a body, like the Congress, for permission to undertake proceedings against a member of that body who would normally be protected by their status as such.

Editorial Urdangarin and the condemnation of the monarchy José Antich 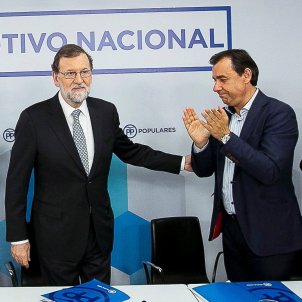