Everything suggests we're entering the decisive week after the Supreme Court trial of the Catalan political prisoners and that we're about to find out the decision of the seven magistrates of the Second Chamber headed by Manuel Marchena. Two years after the independence process reached that critical point with the holding of the 1st October referendum and the proclamation of independence by the Parliament on 27th October, and after a long and unjustified provisional detention of members of the Catalan government, speaker Forcdell and the Jordis (Sànchez and Cuixart), the Spanish state will issue its sentence and we'll find out what the punishment will be for the dozen accused, which is expected to be harsh, with many years in prison for a number of them.

The trial started with a PP government in Madrid headed by Mariano Rajoy and will end with a PSOE one under Pedro Sánchez. And after two years, it's no exaggeration to say that the two tenants have had symmetrical attitudes in their political inability to tackle the conflict, in the absence of solutions and in the failure to use dialogue as a path to a solution, trusting everything to the judges. It was a bad solution when Rajoy opted for it and it remains bad with Sánchez, regardless of how satisfied Rajoy and Felipe González appear in business forums as statesmen with solutions for everything.

Certainly, it's no exaggeration to say that the Supreme Court's sentence will have an impact of unforeseeable consequences in a society like Catalonia's, permanently mobilised and ready to make itself heard and to defend the honour of the political prisoners and Catalonia's institutions. It's not superfluous to remember this, among other things, because it's already happened before. Catalan society doesn't like to be trampled on. There's sufficient precedent to think so: it happened with the sentence on the new Statute of Autonomy by the Constitutional Court in 2010, the origin of many of the things which have occurred over these years.

More than nine years later, another court, in this case the Supreme Court, has in its hands a task beyond its role like a progressive return to normality and the easing of tensions in Catalonia. The incompetence of Spain's governments has put the ball where it should never have ended up: in the justice system's court. The Supreme Court is also risking its prestige, albeit in the long term, should Europe alter its verdicts partially or entirely.

Basically, because although the European Courts will take years to pronounce on the issue, the conflict will likely not have ended since the situation is very different from what Pedro Sánchez what saying in Foro La Toja, in Galicia, this Saturday, proclaiming the failure of the independence movement. And it's because until the opposite is demonstrated, failures are only measured by a lack of electoral support, something which has not happened in any of the Catalan Parliament elections this decade and which it seems the surveys which are being carried out give no hope of. 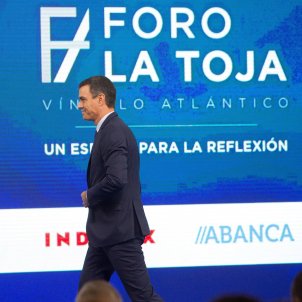