A new language strategy. France has approved a new decree on regional languages ​​that will allow the application of a language immersion model in schools, both in primary and secondary schools. In Catalan, for Northern Catalonia - the Catalan-speaking region at the north-east end of the Pyrenees - but also for the other minoritized languages ​​spoken in the French state, including Occitan, Breton and Basque. Breton MP Paul Molac, from the Liberties and Territories party, celebrated that the new regulation "ensures immersive teaching for the public [schools] and for [private] associations". "I am delighted and will be closely watching the resources that universities rectors allocate in order to expand the teaching supply," he said.

The measure has been promoted by the French Prime Minister, Jean Castex, himself from Northern Catalonia, after the French Constitutional Court overturned the previous law. Despite being passed by a large majority on April 8th in the French National Assembly, the court rejected two central articles of the so-called Molac law on language immersion. This, at the request of sixty deputies from Emmanuel Macron's party (of which Castex himself is also a member). 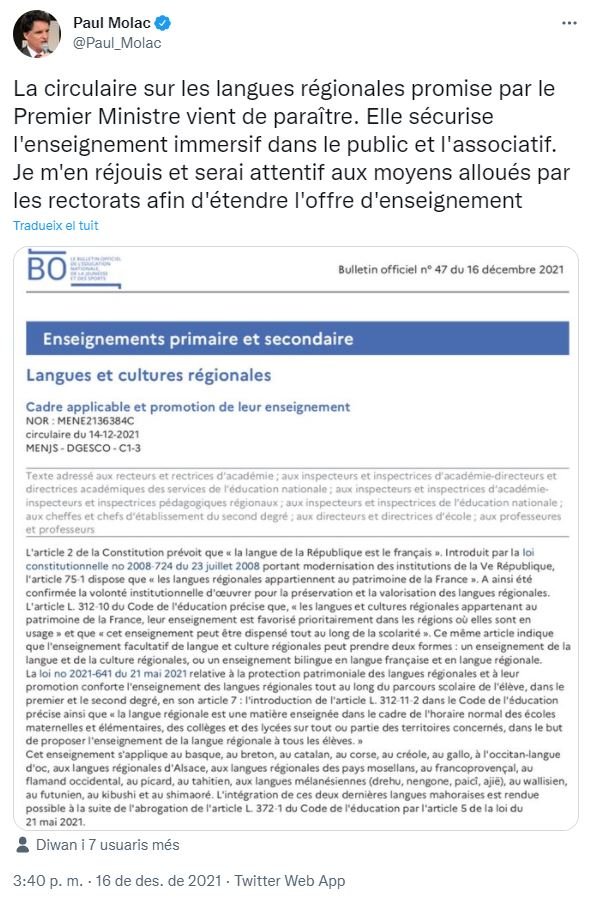 In the drafting of the new decree, the French PM and his team took note of everything to which the Constitution had objected, in order to avoid a new veto. Indeed, "immersion teaching can only be definitively safe after a constitutional review," Molac admitted on Twitter. Therefore, at some point the court of constitutional guarantees will again rule on the new regulation. With the new text, however, it is expected that it can move forward normally.

South of the Pyrenees, the latest move by Jean Castex has also been celebrated. The head of Carles Puigdemont's staff, Josep Lluís Alay, highlighted the making of "more gestures by French prime minister Jean Castex in favour of language immersion in languages ​​such as Catalan, Occitan, Breton, Basque, etc." . Alay's words come at a time when the school model in Catalan territory south of the border is in danger because of judicial interference and the complicity of the Spanish authorities.

While the Generalitat's language immersion policy is hanging by a thread, in northern Catalonia, enough progress is being made to suggest an optimistic future for the language. On Wednesday, the cultural association La Bressola defeated the far-right mayor of Perpinyà in court, ending the council's blockade of a Catalan-language high school project in the city. Thus, they hope that the city council "takes a step back and allows the development of the middle school-high school project in Perpinyà".

In addition, the Catalan language in France has personal support from prime minister Jean Castex. It's no secret that the head of the French government is pro-Catalan, as he showed last weekend when he affirmed that he speaks Catalan himself and that it was necessary to defend the linguistic immersion model of La Bressola. "We are no longer in the age of monarchical hyper-centralization that wanted to erase local dialects and regional languages," he said in an interview with El País.