The prospects for an extension of Catalan-language schooling on the north side of the Pyrenees, in northern Catalonia, have been opened up after a court in the French city of Montpellier ruled in favour of the Catalan cultural association La Bressola in its dispute with the Perpinyà city council, suspending the council's preemptive blocking of the association's use of the Santa Clara Monastery for its proposed middle school and high school. The court rejected the arguments put forward by the municipal government on the risks of installing an educational centre in an area with a high risk of flooding and the presence of a cemetery. In fact, the city council gave reasons linked to heritage preservation, but did not present any plan with regard to this. In view of this, the court considered in its ruling that it had not been demonstrated that the Catalan-language school project could not be carried out for these reasons and noted that the planning rules allow it.

La Bressola announced in early September that it was celebrating its 45th anniversary by taking the first step in opening a Catalan-language secondary school in Perpinyà, which would give continuity in Catalan to the hundreds of students who currently pass through the body's eight primary school centres, studying in an immersion system. Thus, the management advised the city council of its wish to acquire the Santa Clara building for the project and, initially, it did not receive any objection. At that time, it began the purchase process with a deposit of 60,000 euros, but the council then changed its mind and exercised a preemption: asserting its right to purchase the building as a priority, citing heritage preservation reasons, but without presenting any alternative project. That is, mayor Louis Aliot's far-right municipal government launched a baseless strategy to try to block the Catalan secondary school project. 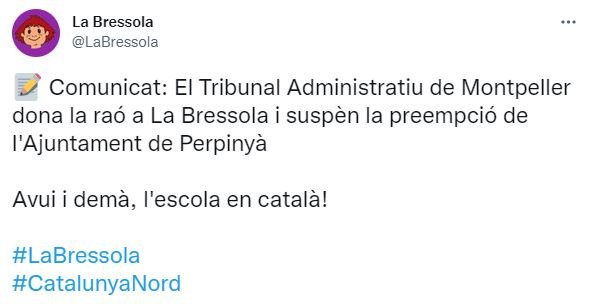 To take on this opposition from the city council, La Bressola organized a press conference to denounce the situation and accused the mayor of "betrayal". It also opened two court actions: one to seek interim measures and another to resolve the substantive issue. Now, the Administrative Court of Montpellier has ruled in favour of La Bressola in the interim appeal and has suspended the preemption exercised by the city council, also ordering the local government to pay 2,000 euros to the school.

The city council argued that it intended to acquire the convent to "preserve the historical heritage" of Perpinyà, while also calling the Bressola project "unrealizable" because it is located in an area at risk of flooding and includes a cemetery where the remains of a prominent nun, Anne Maria Antigo, are found. It also argued that the monastery could not accommodate the 250 students planned and even that all of this was contrary to the planning bylaws. But the court ruling notes that the nuns who own the convent had stated that the city council had never shown any interest in acquiring the space, to the point that the first appointment obtained by the real estate agent with the council was in October, after it had exercised the right of preemption.

The director of La Bressola, Eva Bertrana, welcomed the court decision and announced that the group will now resume the process of making the planned school into a reality, according to the ACN agency. Bertrana said that they had lost time, but the resolution allowed them to resume negotiations and described it as a "first step". She is convinced that the court will also rule in their favour when the substantive issue is resolved.

La Bressola expressed "satisfaction with the ruling of the Administrative Court of Montpellier and asked the city council, in view of the resolution of this interim appeal, to take a step back and allow the development of the secondary school project in Perpinyà". "Following the success of the mobilization on October 23rd, this ruling facilitates the realization of the secondary school project in the Santa Clara Monastery in the Vernet neighbourhood. However, the association continues to work on a provisional solution for the start of the 2022 school year, while it awaits the opening of the new secondary school in the monastery", the entity explained in a statement.

Main image: Demonstration in favour of the Bressola in Perpinyà last October / ACN