Catalan economy will return to pre-Covid levels in 2022

The recovery is on track. According to the latest economic data from the government, Catalonia will recover the economic levels of 2019 - that is, those of before the pandemic - next year. In fact, according to the macroeconomic scenario for Catalonia for the years 2021 and 2022 published this Friday, rises in GDP of 6.4% are expected in both years. If we compare it with the last update, in May, the improvement is notable, as the prediction in the spring was for GDP growth of 6.0% and 5.2% for 2021 and 2022 respectively.

This latest review by the Catalan government suggests a strengthening of the economic recovery, along the same lines as predicted by the leading international bodies, with two clear drivers: investment and external demand. Another development that will help this recovery will be the fall in unemployment, which according to forecasts will drop to 11.2% by the end of 2022.

The Catalan economy and finance minister, Jaume Giró, celebrated these new forecasts and declared that “they invite optimism and should be seen as very positive, especially because of the dynamism of consumption as well as the behaviour of the foreign trade sector and the labour market”. Giró added that, with this macroeconomic scenario, "there is an equilibrium in risks thanks to the progress and effectiveness of vaccination, with the consequent relaxation of many of the health restrictions, and the potential of the European recovery plan."

According to the minister, "the indicators make it possible to balance the risks arising from global supply problems and inflationary pressures as a result of the rise in energy and raw material prices". 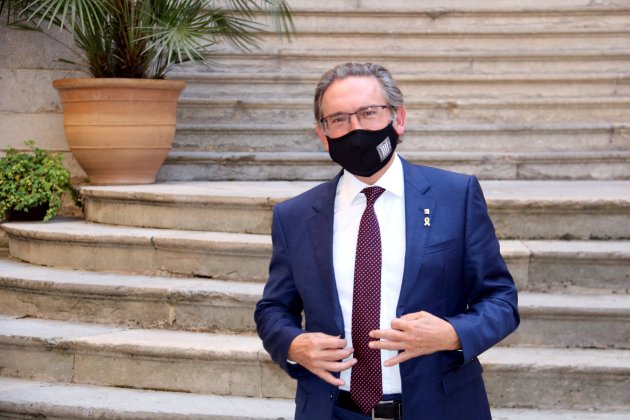 One of the drivers of Catalonia's economic performance in the coming years will be the foreign market, and according to forecasts, goods exports will continue with significant expansion. In addition, it is worth noting that for this year until July the total by value is up by 5.6% on the same period for 2019, and thus already exceeds pre-pandemic levels.

At the same time, the foreign market will make further improvement as tourism recovers. In fact, since May, when the number of foreign tourists in Catalonia was only 5.6% - about one twentieth - of the figure for the same month in 2019, there has been significant rise, so that in August, arrivals were already up to 45.5% of the same month two years ago.

As for the labour market, at the end of September, the level of affiliation to the social security system is 0.6% above that of September 2019, and the number of workers on ERTO furlough schemes has continued to decline and stood at 47,949 people in September - the lowest level since the start of the pandemic for the sixth consecutive month.

2022: the year we will emerge from the crash

Thus, while 2021 has been a key year for the recovery of the economy after the pandemic, all indications are that 2022 will mark the return to the economic levels we had before Covid-19 entered our lives. The fact is that the forecasts point to an increase in GDP of 6.4% (1.2 points above the forecasts for May), with a lower contribution from domestic demand (5.5 points) but higher thanks to external demand (0.9 points).

At the same time, investment is expected to play a larger role, and increases will far exceed 10%, largely due to the European Next Generation funds, while household consumption will continue to rise significantly with increases of 5.5%.

What will begin to decline will be the spending of public administrations after the effort made in response to the pandemic. Foreign trade will remain at similar rates to 2021, albeit with a slight moderation, at 10.7% for total exports of goods and services and 9.0% for imports. In this regard, an important factor is the stimulation of consumption by foreigners, thanks to the recovery of the tourism.

Returning to the forecasts for this last quarter of 2021, according to data from the Catalan economy ministry, GDP growth at a higher rate than previously expected will bring the overall GDP figure to 6.4%, an increase of 0.4% above the forecast made in May. The rebound reflects both the partial recovery in domestic demand and the rebalancing of external demand.

The improvement in domestic demand reflects, above all, the recovery in household consumption, with a rise of 7.9%, and the investment growth. The reactivation of household consumption is closely linked to the improvement of confidence in the economic and health situation, the gradual mobilization of savings accumulated during the pandemic and the sustained recovery of the labour market.

This great recovery in investment levels is due to the retreat of uncertainty and more favourable financial conditions. In addition, the progressive implementation of the European recovery plan should make it possible to boost investment in the last quarter of the year.

The decrease in public administration consumption that we will see in 2022 will begin this year, with the Catalan government projecting a gradual slowdown, following its hugely expansive response in 2020 due to the need to tackle the pandemic.

Looking at total exports - both goods and services - an increase of 11.1% is forecast by the end of December, a rate very similar to that of total imports, which are predicted to go up by 11.5%. Labour market forecasts for 2021 point to a significant increase in full-time equivalent employment, following the sharp fall of 2020.

This employment progress, which should mean the creation of about 147,000 jobs, will be less intense than the rise in the GDP, and for this reason the apparent productivity of labour should improve, in line with the procyclical pattern of the countries in Catalonia's neighbourhood. This dynamic, together with the increase in the active population (which is increasign again after the decline registered in 2020), leads to a moderate decrease in the unemployment rate, to 12.1%.