The sight of Carles Puigdemont and Toni Comín entering the European Parliament to collect their accreditation as MEPs on Friday and the images of both of them walking freely around the European chamber, in the expectation of being able to take part in the next plenary session on January 13th, is the second blow received by Spanish justice in 24 hours. The decision of the Court of Justice of the European Union (CJEU) declaring the immunity of Oriol Junqueras after being proclaimed an elected Member of the European Parliament has unleashed an authentic tsunami over the Spanish state, which, numbed and dazed, has opened itself to a ridicule unprecedented in the EU on a far-from-insignificant issue: the breaching of political rights.

Puigdemont and Comín are already MEPs; Junqueras should have been set free but the Supreme Court is resisting tooth and nail; Clara Ponsatí will become an MEP in February; Puigdemont's lawyers believe that judge Manuel Marchena must now make a supplication with respect to the pro-independence MEPs, trusting that the European Parliament's rules will inflict further damage to the Spanish state; and Belgian justice will not give any response to judge Pablo Llarena's extradition claims for sedition since the crime doesn't exist and everyone knows as much. Of all this, the most interesting aspect once again is in the heart of the European Parliament, since, in contrast with Spain's parliament, supplication requests have to travel a path that is longer and much more profound. Thus, supplications are viewed and analyzed thoroughly for three months by the EP's justice committee in a public hearing, which will surely end up overturning the Supreme Court trial. Does Spain's judge Marchena want this to happen? We shall see.

In parallel with the independence movement's euphoria on the victories of Junqueras and Puigdemont, there has been a resounding silence from personalities whose lies or exaggerations have been lethal for these last two years. Josep Borrell, always so talkative, seems to have suddenly shut up. The PSOE and its barons seem to have disappeared from public view, even with the investiture of Pedro Sánchez right before them. Minister Isabel Celaá and deputy PM Carmen Calvo have been as discreet as they have been cautious, lest the already-negotiated investiture ends up being derailed. The established Catalan newspapers are trying to find a point to get back in touch with reality after having profusely used such descriptive terms as "coup leaders", "fugitives", "cowards" and the like. Several octaves above them is the sound from the Madrid press, in a state campaign against the independence movement which has been running for two years.

European justice has shown up the fact that its Spanish counterpart was not wearing any clothes. The brigade of rampant propagandists, ready to do anything for the unity of Spain, or even just to avoid the undermining of the Spanish government - whichever it is - do not quite know what to tell their readers. The great lie has collapsed like a house of cards while we now begin to hear that Europe has gone against Spain whenever it has been able. The pro-Europeanism of a part of the Spanish ruling class and its deep state now looks like something circumstantial, as former Popular Party ministers suddenly give open support to the idea of Spexit when, just a brief time ago, they declared themselves to be the true thoroughbred Europeans, and it was the independence supporters who wanted to break up the EU. Spain! 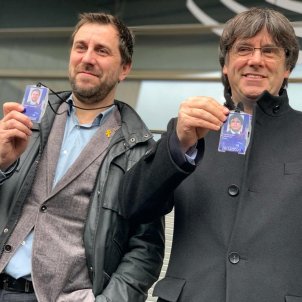