A united front in favour of democracy and fundamental rights. This is the proposal made by the speaker of the Catalan Parliament, Roger Torrent, after this Saturday's parliamentary session which had been called for the second vote on the proposed swearing-in of Jordi Turull as Catalan president, but was re-focused after Turull along with four other Catalan politicians was remanded to a Madrid prison on Friday.

Torrent proposal was made via an institutional statement, addressing all parliamentary groups and entities "committed to the defence of civil and political rights."

"I ask you not for laments, but solutions. I urge you to create, from this moment on, a united front in defence of democracy and fundamental rights," said Roger Torrent. He argued that should be transversal, an "alliance of all democrats" aimed at securing the freedom of the Catalan political prisoners. "Their imprisonment is unfair, unnecessary, unworthy of a democratic country, the behaviour of an authoritarian regime," he said.

"The escalation in violations of fundamental rights perpetrated by state institutions took a new step yesterday, unacceptable to all democrats," he said. In this regard, the speaker of the Catalan chamber argued that "this is not a battle of flags, but of universal values." That is why he has called on "the democrats of Spain, of Europe, from all over the world" to stand together.

Torrent had wanted to warn that "imprisoning people for their political ideas, and denying liberty for those who do not renounce their legitimate ideals, implies putting an end to ideological freedom." And he asserted: "Democracy has been suspended, and we can only recover it through the determination and unity of all democrats."

Speaking on the stage of Parliament's auditorium, Torrent was accompanied by representatives of all parliamentary groups except those of the "155" block. With the speaker were Elsa Artadi (JxCat), Sergi Sabrià (ERC), Xavier Domènech (Comuns) and Carles Riera (CUP). Also present were former Catalan president Artur Mas and former parliamentary speakers Núria de Gispert, Ernest Benach and Joan Rigol. Relatives of the Catalan politicians who are now prisoners were also present, and were received with strong applause. 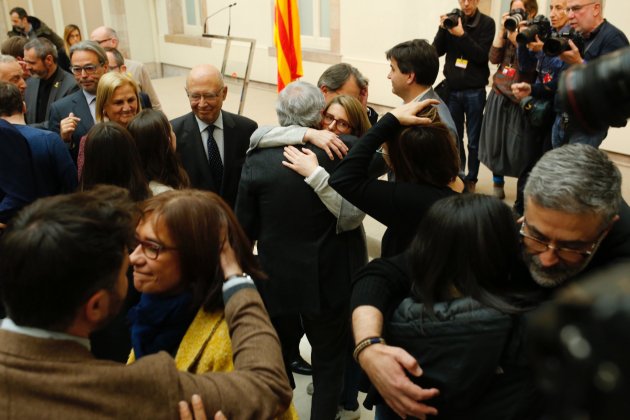