Around two thousand followers of the Spanish far-right party Vox gathered this Saturday in Barcelona's Avinguda de Maria Cristina for the party's first political event in Barcelona, and it didn't live up to the extreme right party's expectations. The event, led by the party's key figures, Santiago Abascal and Javier Ortega Smith, only managed to fill half the avenue. Meanwhile, at an anti-fascist counter-rally nearby, there were some scenes of tension with the police.

Those at the rally waved Spanish flags, and chanted in favour of Spanish unity and in support of the country's paramilitary police force, the Civil Guard. Before the start of the event, the hymn of the Spanish legion, "The bridegroom of death", was one of the songs that rang out.

Once underway, the party's secretary general and former soldier, Javier Ortega Smith, began his speech calling for the jailing of both exiled Catalan president Carles Puigdemont and current president Quim Torra. He told supporters that the reconquest of Spain has already begun, an expression arising from the mediaeval reconquista of Spain from the Moors which the party had already made its own during last Decembers' elections in Andalusia. And he also asserted that it had now been "certified" that in Catalonia a "coup d'etat" had taken place during October 2017 and that a "criminal organization", the Catalan government, with a perfectly structured roadmap, had tried to proclaim independence. 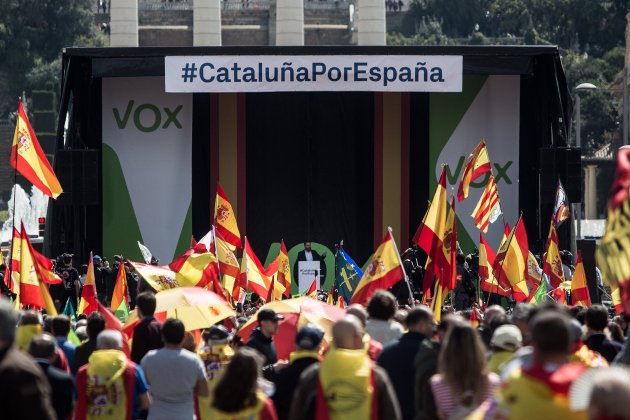 Prior to his speech, several of the party's leaders in Catalonia had criticised the response of Mariano Rajoy's Spanish government to the events surrounding the referendum of October 2017, calling on followers to vote for the far-right party in the Spanish general election on April 28th as the true "tactical vote" for the election. At the same time, they affirmed that Catalan Socialist leader Miquel Iceta was the "true head" of Spain's governing Socialist party, the PSOE - and not Pedro Sánchez.

Ignacio Garriga, Vox leader in Catalonia, labelled the independence movement as "totalitarian machinery" which pursues dissidents. Garriga also assured that "where the Spanish Constitution is, that's where freedom is", he accused the Popular Party of allowing the October 2017 referendum to go ahead, and he made a call to defend Spain from "nationalism" and the independence movement.

Shortly before the event, a group of anti-fascist demonstrators gathered in the vicinity of Plaza España to protest against the Vox event. The anti-fascists formed barricades with road-works barriers in the middle of Carrer Tarragona and at one point a large fire was burning in the street.

Initially, the Vox act was planned to be held in the covered Palau Sant Jordi stadium, but Barcelona mayor ​​Ada Colau, vetoed that, as the building was due to be undergoing alterations and maintenance work.