Torra, at Supreme Court: "It won't be me calling Catalan elections irresponsibly"

Total firmness from the president of Catalonia, Quim Torra, after the hearing held this Thursday in the Supreme Court. "I will not be the one to lead the country into an irresponsible electoral race that would paralyze the Catalan administration," he announced from the Catalan government delegation in Madrid, following calls from virtually all parties yesterday for elections to the Catalan parliament.

However, Torra admitted that he would "never" pose an "obstacle to anything". "I accepted the office of president to serve my country at a very difficult time. I have no personal ambition that might get in the way of the broad, collective project to achieve independence," he declared. The Catalan president stated that "the battle against Covid" is his "sole concern." 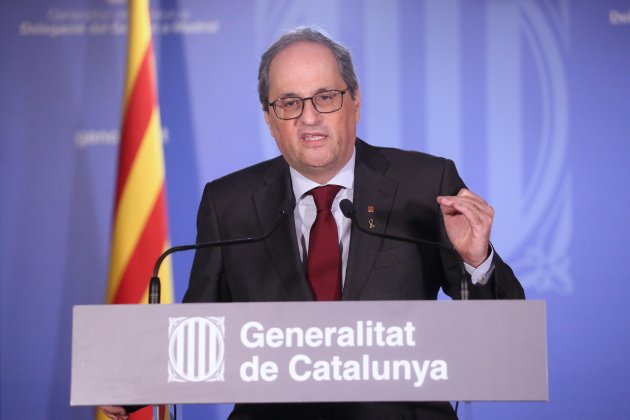 The president wanted to make it clear that today's hearing is not about a punishment against him for a banner, "it is a punishment to an entire country in the midst of a pandemic." " This is how they show their love of Catalonia, which they want to enslave, along with its people," he added, warning that he will continue to work "until the last moment" until his disqualification comes into force.

The challenge for Spain

Torra also threw down a challenge to Spain: "The attitude shown by the Spanish state towards the Catalan independence movement over the next few months will set the moral and ethical foundations for its future. Without a firm and urgent rectification, Spain will seal its failure as a modern European state," he warned.

The leader of the Catalan government also had messages for the Catalan people: "We will not wait for change in the Spanish state to exercise our inalienable right. If the majority of Catalans wish to build a free Republic, this peaceful, democratic expression will prosper. I do not doubt this for a moment," he said.

"What a lie." This is how Torra described the unionist slogan that in Spain "all democratic and peaceful project could be discussed". He delivered a long list of actions which, he said, showed this Spanish claim to be false: the persecution of president Carles Puigdemont, the denial of the MEP seat won by Catalan vice president Oriol Junqueras, the exiles, the political prisoners and the protection of "a Francoist criminal like Martín Villa", among others.

"This is the Spanish state and this is how it charms us into staying on friendly terms.  A state incapable of reform or being reformed in any way. A state that overturns social legislation whenever it is passed by the Parliament of Catalonia", he denounced.

Below, extracts from Quim Torra's address in Catalan.