Torra: "Unsustainable pressure" being exerted on Catalan Parliament to act against him 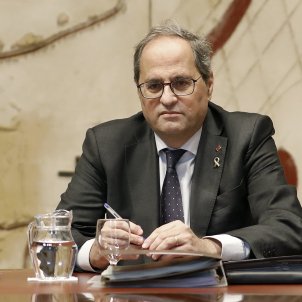 The Catalan president, Quim Torra, has released a statement denouncing the use of "unsustainable pressure" against the speaker of the Catalan Parliament, Roger Torrent, and other members of the house, aimed at convincing them to execute Torra's disqualification as an MP after the Supreme Court endorsed the Central Electoral Commission's decision to apply the ban on him holding office. The pressure being exerted, says Torra, is "incompatible with the legal order, and especially with the Penal Code."

When the Spanish electoral body announced that the disqualification of the president as a parliamentary deputy had to be executed, the speaker insisted that Torra would keep the seat. However, following Thursday's decision, it is now the Supreme Court which has endorsed the commission's ruling, and the final decision is again in Torrent's hands. The pressure being exerted both on the speaker and the parliamentary Bureau which he heads has prompted the statement from the presidential office.

"We must remember that those who, without legitimate authorization, force others to do what they do not wish to, whether just or unjust, will be presumed to be committing a crime of coercion," said the head of the Catalan executive, also warning that the Catalan government would not rule out taking legal action.

The statement from the head of the Catalan executive's office states that "the president continues to have all the democratic legitimacy to hold the office to which he was elected" and asserts that ignorance and a desire to coerce are behind accusations that Torra is committing a crime of "usurping public functions".

The Catalan government insists that the status of a Member of Parliament can only be revoked, in the case of a final court ruling, by Parliament itself, and that the desire of the Central Electoral Commission, as an administrative body, to take this decision, is "a democratic anomaly which generates institutional conflict going beyond the sphere of Parliament." 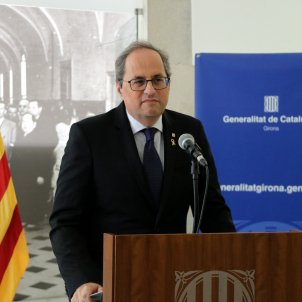