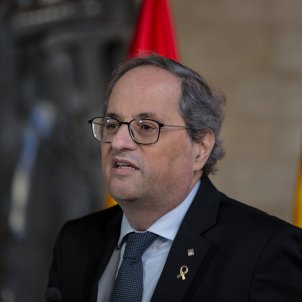 Quim Torra is to take legal action after it was revealed today that Andrés Betancor, ex-member of a key Spanish electoral body whose decisions were at the centre of the Catalan president's disqualification from public office, was also receiving a salary from the Ciudadanos (Cs) political party as an advisor. Torra will file a complaint for bribery, malfeasance and/or electoral impropriety against Betancor, former member of the Central Electoral Commission.

Torra made the announcement on Thursday after it became known that Betancor had combined his activity in the electoral administration with a role as an advisor to the Cs party, which laid many of the initial complaints about the Catalan leader, in particular, on the issue of yellow ribbons. Explaining the legal action, the Catalan president said that Betancor "is at the root of my disqualification."

The complaint will be directed at Betancor and "against those responsible for this scandal, which calls into question all the decisions made by the Central Electoral Commission over the past two years," said Torra.

Translation:
"Since this is at the origin of my disqualification [from holding public office], I am going to file a lawsuit for bribery, prevarication and/or election impropriety against Betancor and those responsible for this scandal which calls into question all the decisions made by the Central Electoral Commission over the past 2 years." — Quim Torra i Pla

Speaking to the media from Lisbon, where he was taking part in the reopening of a Catalan government delegation in Portuguese capital, the president reiterated his intention to take Betancor to court. According to him, all the actions of the electoral body over the last two years are "under suspicion". He said that the case affected not only his "disqualification process", but also the rulings against "president Puigdemont and other colleagues".

Torra stated that it was "impossible to obtain justice in Spain" and that the revelations about the Cs adviser were "shameful."

Betancor was one of those who signed the electoral authority's order, which in March 2019 demanded that president Quim Torra remove yellow ribbons from official buildings. The Electoral Commission acted at the behest of a complaint made by Ciudadanos. That was the original action that eventually led to Torra being banned from holding public office for 18 months, although his sentence is still pending the Supreme Court's consideration of an appeal.

The news of the connection between Betancor and Cs led to strong protests on social media. Exiled president Carles Puigdemont denounced the situation as a violation of fundamental rights, and also noted Cs' key role in the European Parliament's resolution of the immunity of the exiled Catalan MEPs.

"This is very serious, very. This person, in the pay of Ciudadanos, has ruled against us, has violated fundamental rights, while being paid by the same political party which laid the original complaint... and which now chairs the European Parliament's commission that must resolve [the question of waiving our immunity as MEPs]. — Carles Puigdemont

Quim Torra's attorney, Gonzalo Boye, also noted the news on Twitter, and asserted that the complaint against Betancor was strong. The lawyer stressed that "first, there is a political group that hires a person to advise them to submit writs to the electoral commission, and then later on, that same person sits on the commission and decides about those legal  complaints." 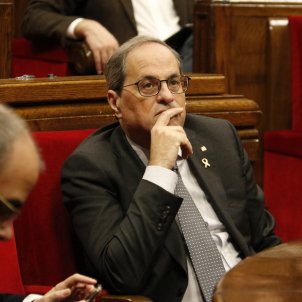