The Catalan government will not attend the meeting of the presidents of Spain's autonomous communities called by the Spanish PM, Pedro Sánchez, this Friday in La Rioja. President Quim Torra informed the head of the Spanish executive of this decision, blaming Sánchez for involving the king, Felipe VI, in the meeting.

Torra stated that neither he nor any member of his executive would attend and listed a number of reasons for the decision, the first of these being the use of an issue "as serious" as the coronavirus to involve the monarchy, which today is "more questioned than ever." He also pointed out the serious Covid-19 situation prevailing in Catalonia and the lack of results of the weekly meetings of autonomous leaders' during the first phase of the coronavirus crisis.

“Now is the time to work and not to take pictures,” concluded the president, calling on Sanchez to address all the issues in a video conference between the two leaders and their respective teams next week.

"Democrats must demand that the royal house be investigated over the information that has been published and that responsibilities be brought to bear. It is not our role to help sanitize the monarchy's image by organizing events linked to a major crisis which has affected so many people both in our country and in Spain," he warned, also noting that the Catalan Parliament recently called for the king's abdication.

Torra explained in the letter that during the period of Covid-19 lockdown and while Spain's state of alarm was in force, he took part in regular Sunday meetings with all the regional presidents because the urgency of the matter made it necessary. He explained how his complaints about the lack of dialogue in those meetings were made public at the time, and reiterated that cooperation between the Spanish and Catalan governments should be bilateral. “We hope that such a serious health crisis is not being taken advantage of to undo commitments and to recentralize even more,” he added.

The Catalan president also criticized the fact that neither his vice president, Pere Aragonès, nor the minister for the presidency, Meritxell Budó, had been able to negotiate any of the contents to be discussed at the meeting, and that so far none of the proposals they had made in economic areas had been resolved. 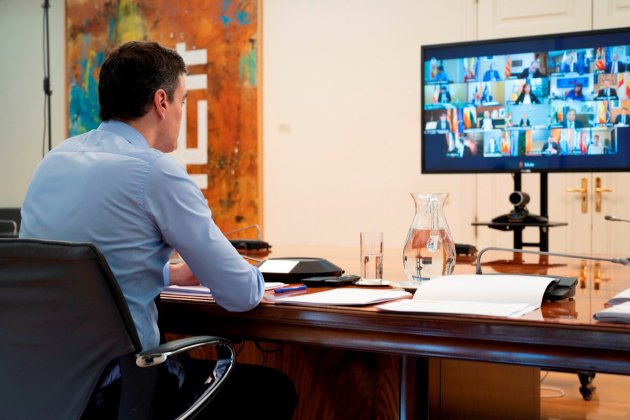 Pedro Sánchez, during a telematic meeting of presidents / Efe

Finally, he argued that he had to stay in Barcelona due to the "very complicated situation of the pandemic in Catalonia" and that, for this reason, he proposed participation by internet. “You know that we are in the midst of critical days and the first person who has to set an example on restriction of movements that we have asked of the citizens is the president,” he stated.

Last Wednesday, Sánchez sent letters specifically to Torra and to the Basque leader, Iñigo Urkullu, inviting them to take part in the meeting. In the letter he reminded them that the previous meeting of presidents had already agreed that the next meeting would be in person.

On the other hand, Torra had already put to the Spanish PM his wish to participate in the meeting electronically.

Muted criticism from the Comuns

Catalan parliamentary leader of the left-wing Comuns Jéssica Albiach said today she understood the Catalan president's position, given the fact that 64% of current Covid-19 outbreaks in Spain are in Catalonia and Aragón, but she argued that the economic importance of the meeting - which in its agenda includes the issue of the 140 billion euros of emergency EU funding allocated to Spain - meant that it was important for the Catalan government to find a way to play its part in the "collaborative management of that funding".