The Catalan pro-independence MEP Toni Comín has warned the European Union institutions on Wednesday that its "inaction" against Spain for "ignoring" the decisions of European justice on his parliamentary immunity "legitimizes the challenge" of Poland.

“Next it could be Hungary and other countries,” Comín warned.

"Is it worth jeopardizing the European project to protect the Spanish state and its authoritarian drift?" asked the Junts party MEP in a plenary debate, directly addressing the president of the European Commission, Ursula von der Leyen, on the European leaders' summit to be held this week in Brussels.

Shortly after the intervention of the pro-independence MEP, it was the turn of the Spanish MEP for Ciudadanos, Luis Garicano, who called Comín's speech "unfortunate". "Don't you realize that what is at stake in Poland is the rule of law? The same thing you broke in Catalonia when you governed." Garicano replied to Comín, referring to the 2017 referendum and independence process.

However, Comín still had the opportunity to respond to Garicano with a history lesson:

Said the former Catalan health minister: "Nazism was defeated in Germany, fascism in Italy, Salazarism in Portugal, Stalinism in Eastern countries, but Francoism was not defeated in Spain. Spain is the exception of the European Union. "

The MEP also corrected his Cs colleague on the events of 2017 in Catalonia: "The violation of European principles and values ​​that occurred in 2017 was not done by the Catalan government, which put out ballot boxes and allowed people to vote, but rather it was the Spanish state who beat voters, imprisoned an innocent government and now it is pursuing us in the face of the calls made by the Council of Europe." In conclusion, Comín asked whether the Spanish Supreme Court and Constitutional Court "should submit to the [EU's] Luxembourg courts, because they are not doing so and that seems okay to you."

European Commission president von der Leyen said on Tuesday that her executive would "act" in the face of the recent ruling by the Polish Constitutional Court questioning the primacy of EU law over domestic law, and she warned that the decision "undermines the protection of judicial independence", something the EU does not want to "put at risk".

"We cannot and will not risk our common values. The Commission will act," Von der Leyen said in a debate in the European Parliament, which was also attended by Polish president Mateusz Morawiecki. 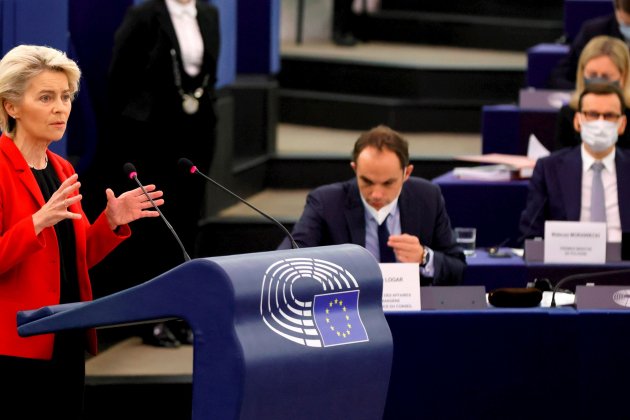 The president of the EU executive also said that the situation regarding judicial independence in Poland "has worsened" and she listed the mechanisms available to Brussels to respond to this challenge, although she did not specify what actions it would take or provide any timetable.

Among them, she mentioned the possible activation of the new community mechanism linking the budget with the EU values ​​on the rule of law, a mechanism which has not yet been implemented despite being in force for almost ten months. She also spoke of the launch of new procedures for violations, to ultimately bring the decision of the Polish Constitutional Court before European justice.