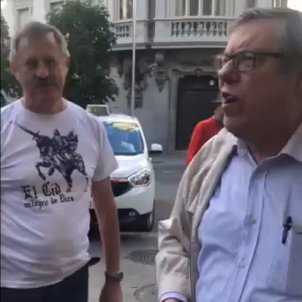 A quiet Madrid street echoed with anti-Catalan insults and threats on Sunday afternoon when two angry Spanish nationalists harassed and abused members of the Catalan pro-independence party JxCat prior to an election meeting. The events took place in Plaza de las Cortes, near Spain's Congress of Deputies, where lawyer Gonzalo Boye, deputy Laura Borràs, senator Josep Lluís Cleries and journalist Bea Talegón were waiting to enter the hotel where their party was holding its Madrid event for next Sunday's European elections.

"Separatist shits, why do you come to the capital of Spain?" the two nationalists asked, having approached the group after spotting Boye, a lawyer to Catalan president Carles Puigdemont. They accused the lawyer of being a "terrorist" due to the time he spent in prison. "You won't achieve anything. You won't get what you want. Some of us have sworn on a flag, do you know that? And if we have to fight, we'll fight to the end," continued the tirade of abuse from the two men.

Boye, Borràs and Talegón recorded the scene and shared it on social media. "Record, record, record, and then put it on your f*cking TV3," they shouted, in a reference to the Catalan public broadcaster.

Translation:
"Before the start of the @KRLS Puigdemont event, we come across some people who would like to see us in jail and they tell us all sorts of constructive things and insult us. Here we are, denouncing it, with @BeatrizTalegon and @boye_g. They say they'll 'fight to the end', we will too, but democratically!"— Laura Borràs

"This is what we have to put up with before starting the event in Madrid. All my support for @boye_g and my condemnation of this barbarity." — Bea Talegón

The Catalan party is campaigning in Madrid for its European elections bid since all voters throughout the Spanish state are able to vote for any of the 32 election tickets running in the country. After a legal battle, the JxCat candidature Junts, headed by Carles Puidgemont, was finally permitted to run with its original candidates, including exiled Catalan leaders Puigdemont, Toni Comín and Clara Ponsatí. 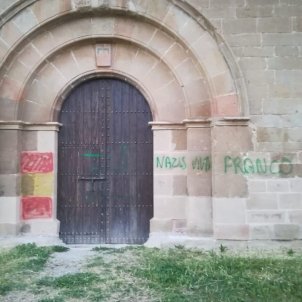 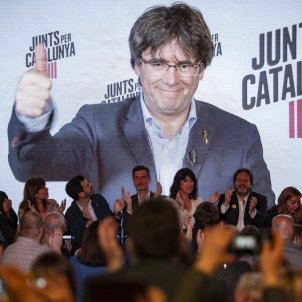