The view at street-level: Catalan independence marchers give their views 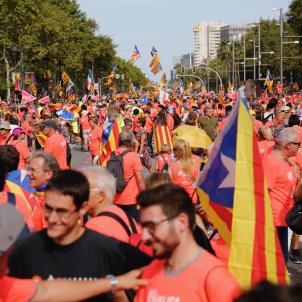 We don't yet know whether we will have - to use an expression which has come into fashion - a “hot autumn” in Catalonia this year, or if instead the political temperature will moderate in line with the usual meteorological trend. But last autumn, the political heat certainly did rise to boiling point and the consequences were major. So much so, that this Tuesday's million-strong demonstration in Barcelona calling for Catalan independence has been held with a background of a referendum and its violent repression last October 1st, a Catalan proclamation of independence, made and then not implemented, leading to the current situation where Catalan leaders are held as political prisoners or have gone into exile abroad. Also part of the picture: the Spanish government's application of article 155, taking over direct rule over the Catalan government for months. The circumstances could not have been more exceptional.

The message in response, at least from the march organizers in the Catalan National Assembly (ANC), has been quite clear. According to the ANC, the mandate for independence that resulted from the independence referendum, ratified in the proclamation of independence on the 27th of that month, must be implemented by the Catalan government. The prisoners and exiles cannot be left to one side, but neither must their existence delay the materialization of the Catalan Republic.

At this Tuesday's Catalan national day demonstration, there were visible signs that the independence movement is currently immersed in debate, perhaps even disoriented. Confusion, frustration, and impotence are predominant feelings. But there is also optimism and even hope. The arguments that ordinary Catalans gave for attending the Diada march were many, and not everybody sees things the same way. In the differences visible among the people in the street, there are parallels with the differences that have emerged in recent months among their political representatives. But there is a unity of action, which at least for the Diada march, has been very solid.

El Nacional put three questions to a range of people attending Tuesday's march in the Avinguda Diagonal. The first: almost a year after the referendum of 1st October, do you see the Catalan Republic as farther away or nearer? The second is about priorities: do we aim first for release of the prisoners and return of the exiles, or to implement our Republic? And the third is the simplest of all: how do you rate the performance of Quim Torra's Catalan government? Perhaps the simplest to formulate, but the most difficult to answer.

Joaquim is 46 years old and has come from the city of Tarragona. He is very pessimistic with respect to the Republic. He sees it as distant, very distant. “I see everything has lost momentum, lost too much momentum”, he says with regret. “On 1st October we already had it within our reach, it was simply a question of publishing the declaration in the official Catalan gazette”, he asserts. He doesn't hesitate to point the finger at “the politicians who didn't do this”. He understands the need to prioritise the political prisoners now that the opportunity of the 27th October has been lost.

He doesn't want to evaluate Quim Torra's government yet. “They haven't done anything yet, I can't give them a rating”, he says. And he sums up: “He's talked a lot but hasn't done anything, just like Pedro Sánchez”. Joaquim doesn't think that a rapprochement with the new Spanish government will achieve much.

Rosalia, in her sixties, also comes from the Tarragona region. She has not missed a Diada march since 2012 and, unlike Joaquim, she is much more optimistic about the current situation. “What was impossible was the uniliateral declaration of independence, and it can now be seen that that doesn't work. You could see it coming, but it had to be tried to see the result”, she says. Now she totally discards a unilateral route. The strategy, she believes, must involve “broadening the base” of popular support for independence. She has no doubt what the priority is: “First the prisoners, obviously”.

“If the prisoners don't get a fair verdict, we will go to Europe, until it is recognized that they commited no crime", she asserts. She would score Torra's government at a figure of 6.5 out of 10, because “he has still not been able to make much impact, he hasn't been able to show us much”. She believes a binding referendum will eventually arrive: “Spain won't listen to us, but if we continue to be strong, the European Union will listen. They can't allow it”.

"The Catalan politicians have not been honest"

Dani, 23 years of age and wearing an antifascist T-shirt, sees the Republic as "further away than a year ago but nearer than ten years ago". If he sees it as more distant than in 2017 it's because, he says, "the Catalan politicians have not been honest, and this has driven people away from the goals". He understands the strategy centred on freeing the prisoners, because it brings more people into the ranks of independence supporters, but he warns that this must not mean "reducing our ambition and objectives".

As for president Quim Torra, he gives him a mere 1 point out of 10, because Torra identifies with "the Convergents", that is, those in the centre-right part of the independence movement, and he believes that he "shouldn't be leading anything". Regarding the Catalan government as a whole, he rates them at "one, two or three at the most". He understands the need to make approaches to the Spanish government, but does not share the strategy.

"The Government is doing what it has to do"

Mercè, 58 years old, has not had to come very far to take part in the march: she lives in Barcelona's Les Corts neighbourhood, right beside the top section of the Diagonal. She hasn't missed a demonstration on September 11th and sees things in a very hopeful light. The Republic, she thinks, is closer than ever. "This is something that moves very slowly, but we'll get there in the end. Our children will see it", she asserts. She doesn't think that one has to choose between the prisoners and the Republic, because "it's all part of the same thing". And she tries to see things from the point of view of the prisoners themselves: "I don't believe they would want it [to be given more priority than the Republic] either".

She gives the Catalan government a score of 12 out of 10. "I'm really optimistic", she admits. "They are doing what they have to do and doing it very well. They are giving it everything for us," she adds. She sees dialogue between Spanish and Catalan governments as "necessary", because the unilateral route is now discarded: "We have to have a referendum and we have to do it with them". 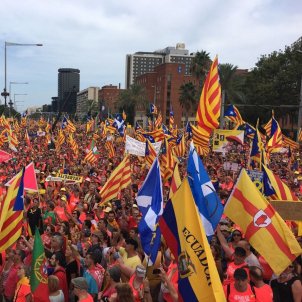 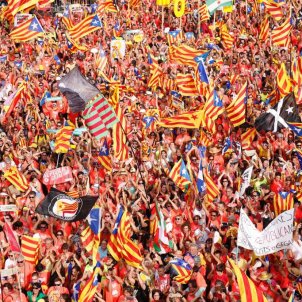