'The National': "Spanish secret service behind the 2017 Barcelona attack?"

Suspicions of dirty war against the pro-independence movement reach Scotland

Scottish newspaper The National has reported the statements by former Spanish police commissioner José Manuel Villarejo, affirming that Spanish secret services "would be behind the Barcelona terrorist attacks". "A former senior officer in Spain’s National Police Corps has said the 2017 terror attacks in Barcelona and Cambrils were organised by the country’s Secret Service in a bid to destabilise Catalonia before the independence referendum there." the newspaper notes.

The newspaper recalls that, according to Villarejo, the attacks were "a serious mistake" of former director of the Spanish National Intelligence Centre (CNI) Félix Sanz Roldán. "The then CNI chief wanted to give Catalonia a fright, but miscalculated the consequences," it adds, and specifies that later it was learned that the imam, the mastermind of the attacks, was a CNI informer. 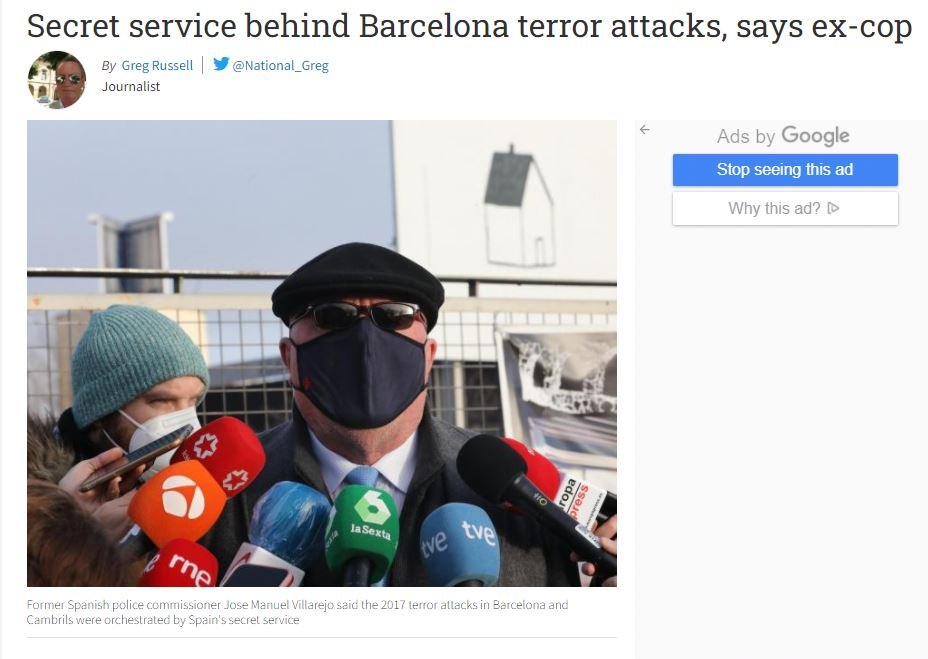 "The secret services, behind the terrorist attacks in Barcelona, says ex-cop," headlines The National.

The National recalls that Villarejo "is something of an 'off the reservation' figure and has been involved with numerous 'secret' operations with the CNI". "He has spent more than three years in custody and his remarks were made in court during a case involving police spying allegations. The former commissioner said he could prove everything he had claimed: 'All the evidence is in my archives. I authorise their release' he added".

The newspaper underlines that Villarejo's revelation "triggered anger in Catalonia", and the Catalan government is studying giving a legal response. It also pointed out that Catalan president, Pere Aragonès, indicated that August 17th, 2017 was "a barbarity that has marked us forever". "And if Villarejo's words are true, explanations are now necessary," he points out. He also explains that Catalan vice-president Jordi Puigneró expressed his concern because no one from the Spanish state has so far contradicted Villarejo's statements or said that they would be investigated.

For his part, former Catalan minister of Interior Joaquim Forn, who headed the Mossos in 2017, criticised the silence of the Spanish institutions, both from the government and the parties and prosecutor's office, after the former police commissioner's statements and demanded a "thorough" investigation. In declarations to Catalunya Radio, he affirmed that he has always been very cautious about Villarejo's declarations, but he added that, whether what he says is true or false, an investigation is necessary to clarify it. An investigation that he believes should have taken place "ex officio" by the public prosecutor's office. Forn considers that would have happened in any democratic European state, while in Spain "nothing is happening".