Surprise has been expressed in France at the prospect of that country's former prime minister Manuel Valls propping up an alliance to enable Barcelona's acting left-wing mayor, Ada Colau, to return to her role as municipal head. Major radio network France Bleu has reported on the manoeuvre by Valls, a losing candidate in the recent municipal elections, to prevent the Catalan capital from having a pro-independence mayor, and warns that Valls is about to support an "extreme left politician, opposed to his own political ideas". The radio broadcaster calls it a "totally incongruous" alliance, with the single common goal of preventing the city from having a pro-independence mayor.

In its news story, France Bleu (link in French) adds that Colau's party has accepted this odd coupling without any apparent dissent. "Although this alliance seems unnatural, the direction of the left-wing party Barcelona en Comú has given its approval," says the broadcaster. 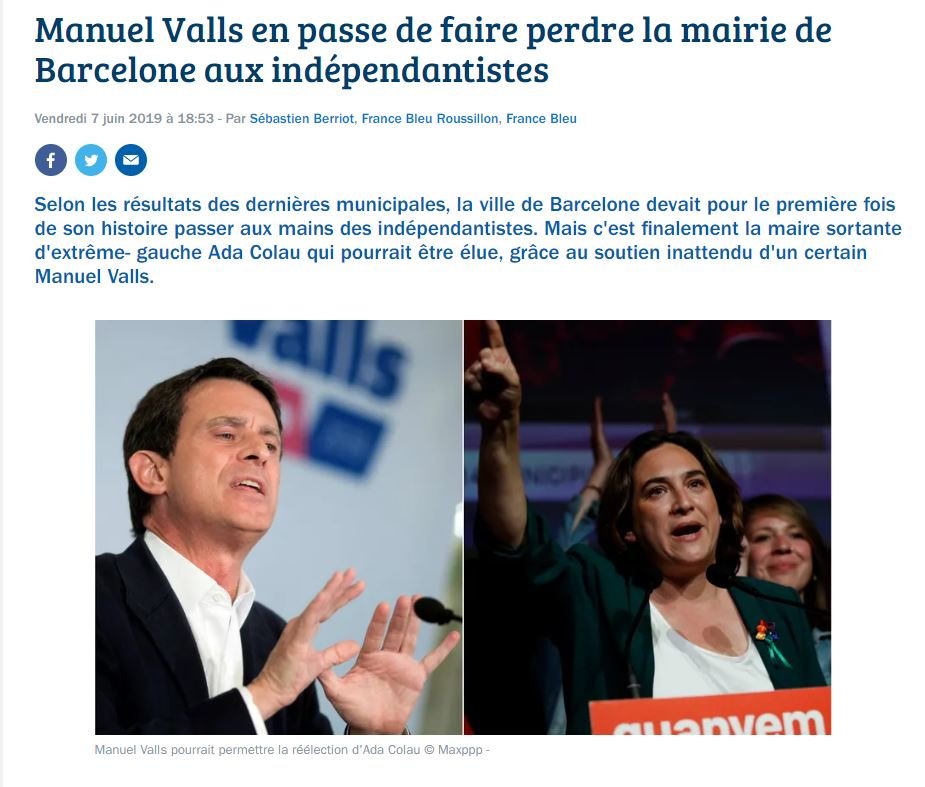 The radio station takes it as given that ERC (Catalan Republican Left) candidate Ernest Maragall will not, in the end, become mayor. "The pro- independence candidate - although he came first on election night with 5,000 more votes than Ada Colau - is on course to be denied victory by a totally incongruous coalition whose only objective is to avoid the arrival to power of a pro-independence mayor in Spain's second largest city. Ernest Maragall appealed for reason on Friday, but for the moment his words have fallen on deaf ears", added the report.

France Bleu notes that Manuel Valls made these political manoeuvres after his own election bid, backed by the right-wing Cuidadanos party, ended in "total failure."

Editorial When did Colau cross the Rubicon? José Antich