"The European Parliament should not turn over Spanish separatists to the Spanish judiciary if they distance themselves from the [unilateral] independence project." Instead it should work with them to "build bridges". That was the view expressed in Germany's second largest daily, Süddeutsche Zeitung, in an opinion article on the situation of Catalan MEPs Carles Puigdemont and Toni Comín published on Friday (link in German). "The highest European values are at stake," warned writer Thomas Urban.

The article was referring to the EU Court of Justice's decision on the immunity of Puigdemont, Comín and also their jailed political colleague, Oriol Junqueras, about whom it noted that "he had not been convicted in May 2019 when he was elected as an MEP." "The Spanish judges did not take into account the outcome of a democratic election or the verdict of the Luxembourg-based EU court. It is a European legal scandal," it said. 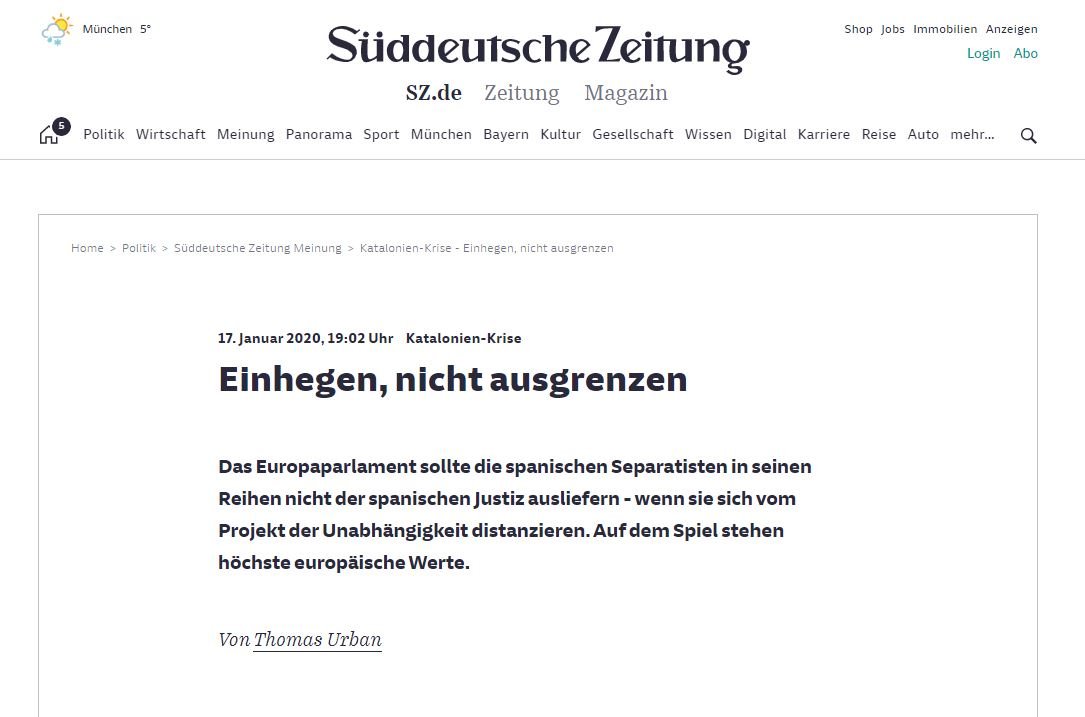 The writer also asserts that although "there is not a major level of support for Catalan independence among MEPs, the European parliamentarians can make a difference: they can build bridges in the conflict by making Puigdemont understand that they want to keep him as their elected representative if he distances himself from the [unilateral] independence project." "Junqueras has already done that," says Süddeutsche Zeitung's article.

Finally, it states that "the moderation of the Catalans in the European Parliament would also strengthen the Socialist prime minister Pedro Sánchez in Madrid, who has chosen a path of dialogue". "It would also send a signal to Spanish justice, whose actions are controversial even in their own country."

"The fact is that the Catalan crisis cannot be resolved through draconian sentences, but only with a political commitment that allows Catalan separatists to retire with honour. MEPs must make a key contribution, by involving and not excluding obstinate Catalans", the writer concludes.