Exactly half of those Catalans who prefer to speak Spanish also back the Catalan language immersion system in Catalonia. This is what the Catalan public research agency, the CEO, has concluded in its latest socio-political survey. According to the study, carried out in December 2021, the use of the Catalan language in Catalonia's schools is not very controversial among the public. Twenty percent of those interviewed consider that the use of Catalan in the education system is insufficient; and about the same amount - 22% - consider it excessive. On the other hand, almost 60% of the population believe that the level of Catalan in classrooms is already appropriate. In the same vein, 76% of respondents are somewhat or strongly in favour of defending the language immersion model. Pro-independence voters and those supporting left-wing En Comú Podem advocate this model. As well, more than 60% of Socialist voters are in favour, while supporters of the three parties of the Spanish right - the PP, Cs and Vox - are against.

However, another of the facts reflected in this CEO study is that Catalan speakers switch languages in daily situations. Thus, the theory that has been at the centre of a heated debate in recent months in Catalonia has been confirmed by the CEO poll. In Catalonia, where the vast majority of the population are fully competent in both languages, 59% of those who have a preference for speaking Catalan change their language and respond in Spanish when someone speaks to them in Spanish. In the converse situation, the percentages are also exactly reversed. Only 41% of speakers who favour Spanish say that they switch over to Catalan if they notice that the person with whom they are in conversation is using Catalan. These are, then, statistics that directly affect one of the claims made in recent months: that in order to save the language, Catalan must be kept in the conversation. 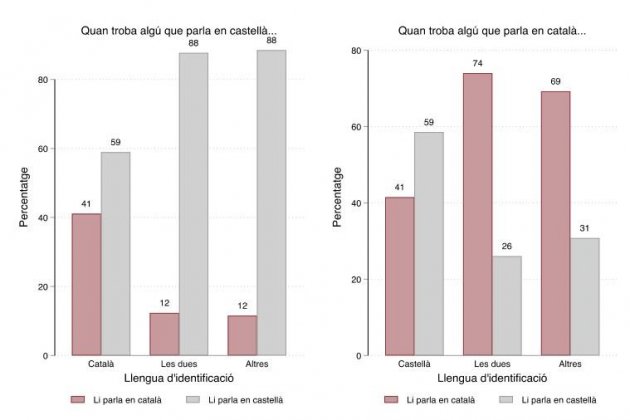 At left, the language that Catalans use to respond to a person who speaks to them in castellà (Spanish); and at right, in català (Catalan). In each case, the question was asked to people of 3 different linguistic preferences (left to right): the other major language from the speaker; those who have equal preference for the two; and those who prefer a third language. (pink = Catalan; grey = Spanish)

But there's a catch: as the CEO also reveals in this latest survey, most Spanish-favouring speakers in Catalan consider it rude for someone to answer in Catalan when a person has opened the conversation speaking Spanish. Specifically, this is the opinion of 64 percent of Spanish-favouring members of the public interviewed in the survey. This same group don't think it's bad manners to do the same when the situation is reversed: only 28% of Spanish-favouring Catalans believe that it is rude to answer in Spanish when someone has started the communication in Catalan. And what do the Catalan-favouring members of the community think? Well, the percentages are more even: 38% think it's rude to answer a Spanish-speaker in Catalan, and 46% say it's not good to answer in Spanish when someone addresses you in Catalan.

Another aspect of this scenario: the CEO concluded that those Catalans with a clear language preference will use it - Spanish (89%) and Catalan (82%) - for conversation if they do not know which language their interlocutor favours. Thus, they tend to maintain their "language of identification". However, it is important to note that in this situation, a majority those who favour both languages equally (58%) - as well as those who prefer a third language, such as English (64%) - choose to address this hypothetical person in Spanish. One of the fundamental elements in the debate over the Catalan language in recent months is the health of the Catalan language. In this regard, the CEO concludes that 80% of Catalan-favouring interviewees consider that the situation of Catalan in the country has worsened. The study, however, did not go deeper into the reasons that led Catalan speakers to this view, as acknowledged by its director, Jordi Muñoz, at a press conference. 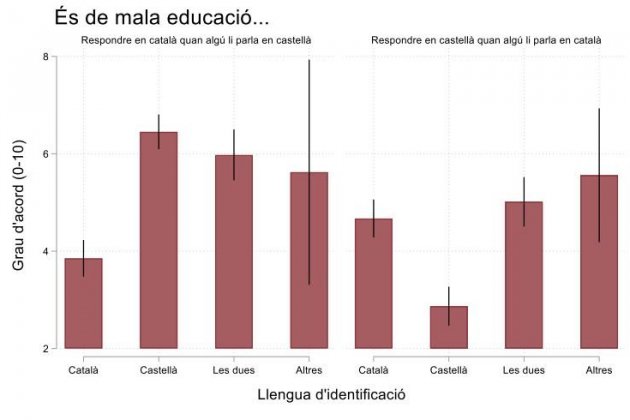 The CEO also decided to ask Catalans what they think about the pandemic and the management of the fight against the coronavirus. One of the key questions concerned what Catalans think about vaccination. According to the CEO, 68% of Catalans believe that vaccination should be mandatory, a measure that some European countries have already taken. This view is more dominant as people get older. Only 58% of people between the ages of 16 and 24 agree, while a mandatory vaccine finds favour with 75% of those aged over 65.