Catalonia's linguistic immersion: what's it all about?

Following the controversial court decision that seeks to impose a 25% quota of Castilian (Spanish) language in Catalonia's classrooms and thus disrupt the current Catalan educational model, everyone is talking about that model: Catalan language immersion. But what is language immersion? What it is not is simply an insistence on speaking Catalan in class at school, but rather, it goes much further. It is a bilingual education model that aims to teach a second language by placing students in a learning environment whose language of communication and instruction is the language that they are to learn. All this, within the context of a particular sociolinguistic situation.

That context is, in the first place, a country or society where two languages coexist, and where language immersion is put forward so that students will acquire full competence in the language when it is not the language spoken in their families, without detriment to the language used at home. Thus, at school, language learning includes the whole set of communications situations which are normal for the age group, using a language that is not the first one learned by the children, while making sure that the family language and culture remain socially strong and have their presence, function and vitality assured outside the classroom. The main feature, then, is that these kinds of programmes are designed by the community as a whole, not just by a linguistic minority: they are models for teaching a second language aimed at children in the majority culture.

These concepts are outlined in the Catalan education ministry's 28-page document explaining the theory behind the system (link in Catalan) which goes into other relevant characteristics of linguistic immersion, such as the bilingualism of the teachers, the mentality that learning a language requires “doing things” with it or the fact of not forcing students to use the second language for the rest of their language use. Features that are shared around the world, because this is a model that is not unique to Catalonia: rather, it is a successful methodology that has been used in many parts of the world.

In fact, language immersion began in Quebec (Canada) in 1965. Two years earlier, English-speaking parents at Saint Lambert School had expressed concern about their children's serious deficiencies in their French, which meant a serious impediment for their chances of finding work or responding to the social demands of the future. Thus, the school conducted the first-ever test of this methodology, educating children who were English-speaking (majority language) in French (second language). The programme meant a change of language from home to school, and achieved good results that showed how teaching from the beginning of schooling in a second language helped students to learn it without holding back these students in terms of their overall academic success.

From Flanders to the Balearics

In Europe, an immersion system has long been used in Flanders (Belgium), where the language of the land is Flemish/Dutch, but many homes have French as the family language. Thus, Dutch has long been established as the language of instruction at school, without any harm to the use of French or its speakers.

In the Spanish state, there are three educational lines in the Basque Country that coexist simultaneously in the education system. One offers language immersion in Basque, another is entirely in Castilian, and a third mixes both languages ​​in quotas of 50%. And already in the Catalan-speaking lands, there is the situation in the Valencian Country and the Balearic Islands. In the first case, the situation is complex: in the parts of the Valencia region which have always historically been Castilian-speaking, the school is in Castilian; while in the Catalan-speaking area, there are school lines in valencià - as they call it - for both Catalan-speakers and non-Catalan-speakers. In the Baleares, Catalan has been the language of instruction in schools since 1994, despite the fact that José Ramón Bauzá's Popular Party government tried in recent years to end the immersion system with a policy called Integrated Language Treatment (TIL), which aimed to reduce hours in Catalan to 33%. 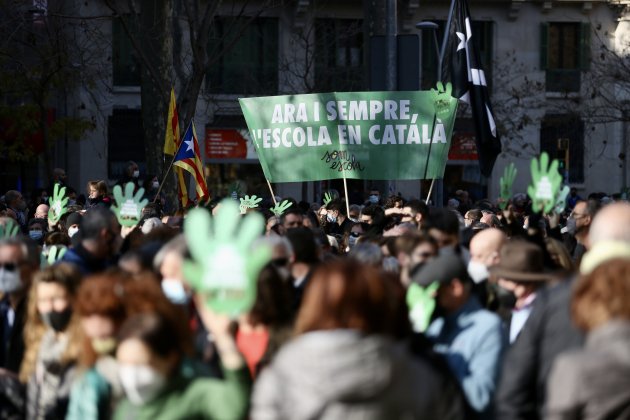 The case of Catalonia

In Catalonia, the key moment was when the presence of the Catalan language suffered an (earlier) sudden reduction due to the strong migratory wave - from around the Spanish state - that had arrived in the territory in the 60s and 70s. In this context, in 1983, the Language Immersion Programme (PIL) was implemented in 19 public schools in Santa Coloma de Gramenet in Barcelona's north-eastern periphery, where the majority of the population was Spanish-speaking. Specifically, the first centre to implement it was the Rosselló Pòrcel school, thanks to the demands of working-class families who wanted their children to be educated in Catalan. The success of the pilot test allowed immersion to be introduced into more than 700 schools around Catalonia by 1989, to the point that by 1992, schooling in Catalan became the teaching model throughout Catalonia.

During this time, the Catalan government supported this educational model with all the legal and budgetary measures that would help guarantee it: in 1983, the Linguistic Normalization Act was passed; in 1998 this text was expanded, giving rise to the Language Policy Act; and by 2009, Parliament approved the Catalonia Education Act. In fact, in 1994, the Spanish Constitutional Court ruled in favour of the Catalan language immersion model.

An effective and successful model

The model is a success, as shown by the different studies included in the Plataforma per la Llengua's document Linguistic immersion in Catalonia. An effective and successful model (this one's available in English, here). Thus, the competencies in Castilian of school students in Catalonia are equal to or better than the average for the rest of Spain.The same goes for other knowledge areas, such as mathematics. In fact, the data show how Catalan students (and other places where immersion is applied and, therefore, the bilingual teaching model) do better in learning a third language, such as English.

Despite the good results of the immersion programmes, justice has frequently ruled against the Catalan school system. Of note is the decision of the 2014 High Court of Catalonia, which ruled that schools had to teach 25% of classes in Spanish if even one student (or their family) requested it. That brings the story almost up to date, with the latest judicialization of the language in Catalonia: two near-simultaneous court rulings, one by the Supreme Court confirming the general principle of earlier decisions on the imposition of 25% of Castilian in classrooms, and the specific decision of the TSJC to bring in 25% Castilian in one class of 5-year-olds in the town of Canet de Mar. Constant threats to the linguistic immersion model that end up crashing into Catalan resistance in the street.

Main image: Thousands of people at the demonstration this Saturday, December 18 in Barcelona in defence of language immersion / Montse Giralt