Against prime minister Pedro Sánchez and against the Catalans. Pablo Casado, Albert Rivera and Santiago Abascal together in the Plaza de Colón. Less than 48 hours before the trial of the Catalan independence leaders begins, the Spanish right and the Spanish extreme right rallied in the heart of Madrid in protest against the dialogue between the governments of Spain and Catalonia. In a sea of ​​Spanish flags, tens of thousands of people raised their voices to demand the resignation of the Spanish PM and the imprisonment of the Catalan "coup plotters". But the turnout did not reach expectations: 45,000 according to the Spanish government delegation. Meanwhile, the Popular Party (PP) and Ciudadanos (Cs) said it was 200,000.

The demonstration was called by the PP and Cs, engaged in a head-to-head struggle for the hegemony of the right, following the announcement that a rapporteur would take part in the dialogue on Catalonia, which the two parties labelled as "high treason" against Spain. But it was the extreme end of the right-wing spectrum that ended up dominating the protest, beginning with Vox, which filled Plaza de Colón with posters of "Send the coup plotters to jail" in its party colours. Ultra groups like Hogar Social Madrid, Falange, España 2000 and Democracia Nacional also took part in the event.

Under the slogan "For a united Spain, elections now!", with groups merging from different points of the Spanish capital, tens of thousands of people gathered in Plaza de Colón. The contest for the most popular message of the day ended up as a tie between those attacking Pedro Sánchez and those attacking Catalan independence. From "Put Puigdemont in prison" to "Sánchez, resign".

Nevertheless, as a protest against the Spanish prime minister, for which the PP even funded travel for people coming from around Spain, the turnout figures made it close to a flop.

The unitary manifesto read by journalists Carlos Cuesta, Albert Castillón and María Claver, began by expressing "the strongest rejection of the treason perpetrated by the government of Spain in Catalonia." They described the  concessions which Sánchez has supposedly made to Catalan president Torra as an "unprecedented state humiliation", and Sánchez was accused of "turning his back on the law and justice."

The text compiled this "selling out" to Catalan independence "blackmail": allowing Torra to enter the Spanish government palace wearing a yellow ribbon, transferring the prisoners to the Catalan prison of Lledoners, "accepting bilateralism" at December's Pedralbes summit, "accepting the 21 demands of the secessionists", starting negotiations for the passing of the government budget "in exchange for national sovereignty" and "accepting the possibility of mediators or rapporteurs."

In this regard, the journalists criticised the "suicidal drift" of Pedro Sánchez's government. They also warned that in two days time, the trial "on the assault on Spanish democracy" begins. And they concluded: "National unity is not negotiable. For this reason, we call on the prime minister to call general elections immediately so that all Spaniards can decide their future." 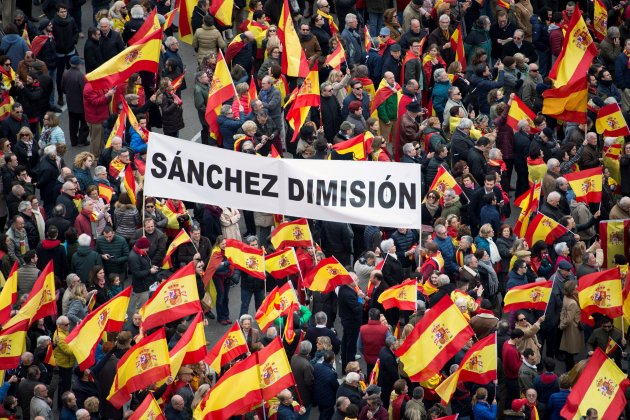 Speaking for the PP before the start of the rally, Pablo Casado affirmed that "we can't stand any more socialist surrenders or independence movement blackmail." For this reason, the PP leader called for "an immediate end to dialogue with those who want to destroy Spain". He recalled that Tuesday marks the start of "the trial of the worst coup d'etat since that of 1981."

For his part, Albert Rivera argued that the rally this Sunday marks "a turning point in this legislature." He stated that the protest is "to say no to pardons and privileges, and yes to Spain". And he sent a message to Sánchez: "We hope you take note. If you call elections, we won't have to mobilize any more [than this]."

Finally, the head of the Vox party, Santiago Abascal, called for president Quim Torra to be put under arrest. "The coup must be suffocated thoroughly, via the arrest of its leaders and conspirators," he said. "We are referring to the Catalan presidency, which even in the last few weeks has still threatened to take a violent route, that of Slovenia, to declare the independence of Catalonia in the face of government inaction. "

The demonstration concluded with the Spanish national anthem ringing out at high volume across the Plaza de Colón, which was a sea of ​​Spanish rojigualda flags, while Casado, Rivera and Abascal ended up taking to the stage together.