Praise for the Spanish security forces - the Civil Guard and the National Police - was the order of the day in Barcelona's Plaça Catalunya this Saturday morning at the annual demonstration held by the pro-Spanish-union part of Catalonia to mark October 12th, the Dia de Hispanidad - "Day of Spanishness". A lot of praise, but not so many people singing it: the march, which started in the lower part of the city's Passeig de Gràcia and ended up only half-filling Plaça Catalunya, attracted 10,000 people according to official figures from city police. This was a small fraction of the 55,000 people who police counted at the march last year. Meanwhile, the organizers claim there were 200,000 people present. At the head of the march, a banner which read "For Spanishness, Catalonia contributes" and was carried by the local leadership of the three Spanish parties of the right: Ciudadanos (Cs), the Popular Party (PP) and Vox. The parties even managed to argue among themselves.

Video recorded at 1.30pm, with the event underway

On the eve of the Supreme Court verdicts on the pro-independence civil and political leaders, the speakers at the unionist march took it as a given that the defendants will be found guilty and made it clear that that it is exactly what they want, with repeated chants of "To jail" and "Puigdemont, to prison". There were also direct messages to the judges: "Do your homework well, neither forget nor forgive, long years in prison", demanded the vice president of the Spain and Catalans group.

One speaker, a spokesperson for the ultra-right group Somatemps, called for a "patriotic resurgence" and gave an extremely vehement warning, that "the Catalan government has become a tyrannical oppressive state structure which it is lawful to resist with all legitimate means that are within our reach". And he added that "nationalism is either defeated or it enslaves." Moreover, the Popular Party's Barcelona city councillor, Josep Bou - the only elected politician who spoke on the stage, although in his role as vice president of a business association - applauded the controversial words of the Civil Guard head in Catalonia, general Pedro Garrido, in which he affirmed in reference to the paramilitary force's actions on October 1st 2017 that if necessary they "will do it again". "We won't ask for forgiveness," said Bou. 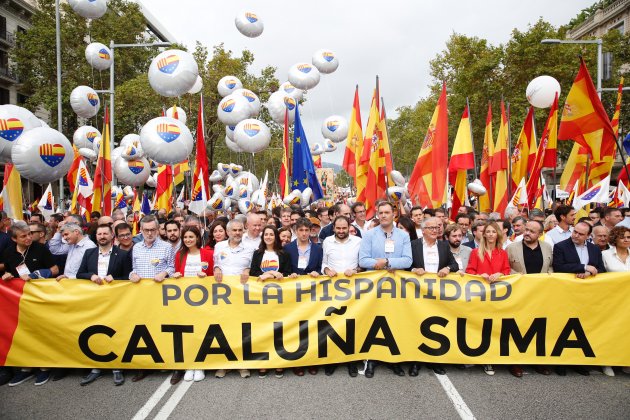 As also occurred in the Catalan Parliament during last week's debate, not only the independence movement, but also the Socialist (PSOE) party, were the target. On the stage, the leaders of the march's organizing bodies accused their political representatives of weakness. "There are reasons for applying article 155", they asserted. Likewise, there was heavy criticism of the PSOE, but also of the PP, for the pacts that both have made in the past with the Catalan nationalist parties. "Don't trust the political caste that has so often betrayed and sold us out," said the leader of the extreme-right Somatemps group.

Yet there was more. Stirred up after a video from anti-independence comic actor, Albert Boadella, the protesters in Plaça Catalunya offered short-arm salutes to pro-independence supporters.

The PP, fed up with Inés Arrimadas

At the beginning of the march, in the Passeig de Gràcia boulevard, there was a moment of tension between several PP activists and the leaders of one of its right-wing competitors, Ciudadanos.

Popular Party members confronted former Catalan leader of the Cs party, Inés Arrimadas, for having broken the pact between the parties to not carry their party symbols on the march. Cs flooded the head of the march with balloons, stickers and banners with the party's iconic heart symbol. This outraged some of those present who openly said that it was "shameful". As one PP supporter told ElNacional.cat: "Today is the festival of Spain, not of a party which desperately goes round everywhere trying to steal the show."

Just before the march began to move, Cs leaders Lorena Roldán and Inés Arrimadas and the PP pair Alejandro Fernández and Cayetana Álvarez de Toledo made statements to the media calling for the Supreme Court verdict and sentence to be accepted. And not only must the independence movement accept it, said the right-wing leaders, but Pedro Sánchez must also do so. The right urged Sánchez to forget the idea of pardons for the Catalan independence leaders. The leader of VOX in Catalonia, Ignacio Garriga, also spoke, again calling for the arrest of Catalan president Quim Torra.