While the final countdown continues until the official announcement - due on Monday - of the verdicts in the Spanish Supreme Court trial of 12 Catalan pro-independence leaders, more and more Spanish media voices over the weekend have been pointing towards likely convictions for sedition and misuse of funds for the nine imprisoned political and civil leaders, and for disobedience of court orders for the other three accused politicians who are on bail. On Saturday, the Madrid-based newspaper El Mundo, the digital publication El Español, and the SER radio network were the latest to adopt this hypothesis, which had previously been asserted by other media in the Spanish capital. The truth or otherwise of these details will be confirmed when the sentence is officially notified, expected during the day on Monday or by Tuesday at the very latest.

According to these media, the Supreme Court has reached unanimous agreement to find the the prisoners guilty of the crime of sedition. This conviction, they say, would be punished by the court with 15 years in prison, the maximum allowed by the Criminal Code for this offence. The members of the Catalan executive affected by this sentence would be vice president Oriol Junqueras, ministers Jordi Turull, Raül Romeva, Josep Rull, Joaquin Forn and Dolors Bassa; the former speaker of the Catalan Parliament, Carme Forcadell, and the leaders of the ANC and Òmnium Cultural pro-independence civil groups, Jordi Sànchez and Jordi Cuixart.

If true, this information means that the accusation of rebellion made by public prosecutors has been ruled out by the judges. According to these media, the Supreme Court concluded that the "violent incidents" of 20th September and 1st October "did not mean that violence was conceived or used by those convicted as a structural element of the plan to achieve secession".

The conviction of the prisoners, say the reports, also includes a verdict of guilty to the charge of misuse of public funds, but the information leaked to the Spanish media does not make it clear what the sentence will be for these offences. This information could affect the total length of jail time the Catalan pro-independence leaders are sentenced to.

The other three accused members of the 2017 Catalan government who were on trial, Santi Vila, Meritxell Borràs and Carles Mundó, will be found guilty of disobedience, but will be fined and banned from holding public office, without receiving jail terms, according to the Spanish media which have published the leaked details.

Defence lawyers for the accused have expressed surprise at the apparent leaking of the verdicts and sentences. If the reports are confirmed to be correct, says the defence team representing Jordi Sànchez, Josep Rull and Jordi Turull, apart from "a lack of respect for the defendants and their families, it would be a flagrant violation of the secrecy of the deliberations, required by law."

Editorial The leak of the verdicts: a controlled explosion in an anaestheized democracy José Antich 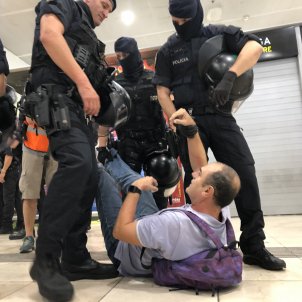