Spain's current minister of health, Salvador Illa, says that "he is ready to preside over Catalonia". "I want to be Catalan president because I have hope and confidence in Catalonia. I take it as an act of service and I accept the candidacy," said Illa in the extraordinary National Council meeting of the Catalan Socialist Party (PSC), this Wednesday, at which the first secretary of the PSC, Miquel Iceta, also spoke.

Illa, the man who Spaniards have got to know as the face of the Pedro Sánchez government's fight against the coronavirus, has been announced this Wednesday as the PSC's candidate in the Catalan elections on 14th February. Party sources say that the decision was taken due to the greater popularity of the health minister in the latest polls. The proposal to install Illa as candidate was ratified by this afternoon's meeting.

"We will recover a Catalonia of which we are proud," said the current health minister in his first speech as a candidate for the Catalan elections. "I trust in Catalonia and in the capabilities of the Catalans to overcome adversity. Without rancour, re-engaging with one another again," he remarked.

Thus, the first secretary of the PSC, Miquel Iceta, officially stepped aside this Wednesday to make way for Illa as a candidate for the presidency of the Generalitat of Catalonia. "I want to do politics, but today is not about that: today it is about electing a future president of the Generalitat," said the current minister in explaining his decision which was "personal, but above all political", and made, he said, with the help and advice of prime minister Pedro Sánchez.

Iceta backed Illa's candidacy, saying that he would be "a president to unite Catalans, to take the whole country in his head and heart, and not just half of it", adding harsh words for the current government. "They promised independence and have only achieved incompetence and decadence. We do not want to keep being a laughing stock because some people are not up to the standard," he said. According to Iceta, Salvador Illa is a winning proposal for a "triumphant Catalonia", following in the progressive footsteps of other Socialist presidents such as Pasqual Maragall and José Montilla. 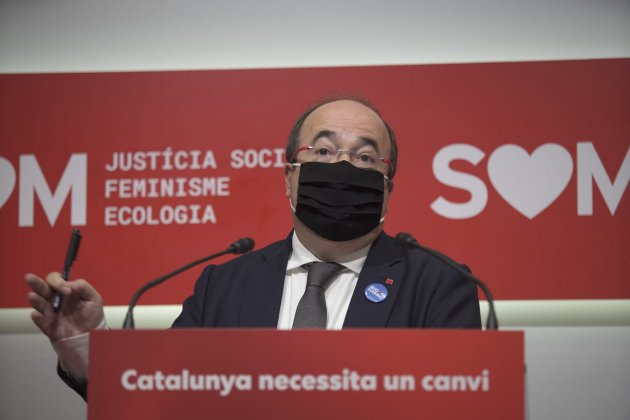 The first secretary of the PSC, Miquel Iceta. / PSC

New candidate just over a month before election

The announcement of Salvador Illa as the PSC's candidate was sudden, given that both the minister and Miquel Iceta had assured that the PSC first secretary would continue to occupy first place in the candidature. However, as ElNacional.cat reported in October, Pedro Sánchez's inner circle has been considering a change for weeks, and Iceta's offer to step aside was already on the table in the middle of the second wave, according to El País. Unfavourable polling for the party in Catalonia and the growing popularity of the minister have been the main deciding factors in making this decision.

Responsibility for the Spanish health ministry at this critical moment will now pass to the current minister for territorial policy, Carolina Darias. Sources from the Spanish executive are reported by public broadcaster TVE as saying that the Sánchez government wants to give continuity to Illa's work; Darias has been working closely with him over the months of the coronavirus crisis via the Interterritorial Health Council, a key coordination body for Spain's decentralised health system.

As for Miquel Iceta, the PSC leader said at today's National Council meeting that he has not lost his desire to do politics and prime minister Pedro Sánchez is considering giving him the territorial policy portfolio, which would making the exchange of roles into a triangular one.