Spain's state solicitors office, legal representative of the Spanish government, has withdrawn from the proceedings in the Court of Accounts against 34 high-ranking Catalan government officials and civil servants who are accused of diverting funds for the foreign promotion of the independence process. However, at the same time, the government attorneys have entered the criminal proceedings over these same spending claims opened in Barcelona court number 18.

The reports of the Court of Accounts, which demand payment of 5.4 million euros from officials who served in the Catalan government between 2011 and 2017, arrived in the courts a few weeks ago - specifically in Barcelona's court number 18. The origin of this criminal case is the complaint filed by the public prosecutors following the report of the Court of Auditors. 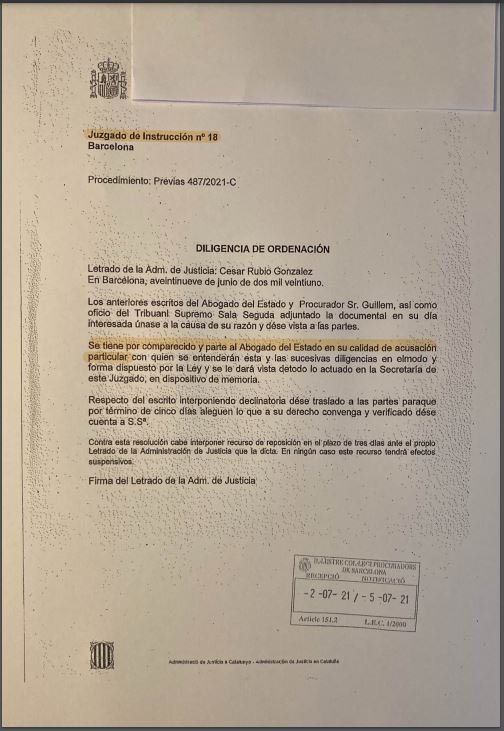 As the parties were informed today, the state solicitors have appeared as a private prosecution and as a party in this case.

On the other hand, the state legal representatives have not been able to do so in the case before the Court of Accounts due to the fact that the funds whose use is in question correspond to the Catalan government and are not Spanish state funds. The state solicitors' absence in the Court of Accounts had led the Spanish parliamentary opposition to denounce the Pedro Sánchez government's position on the matter.

The pro-independence parties have repeatedly called on the Sánchez government to end the action by both the state solicitors and the public prosecutors in carrying out prosecutions for independence process-related offences.

In the main image, Artur Mas, Catalan president from 2010 to 2015, one of those pursued by the Court of Accounts for misuse of funds for the foreign promotion of the independence process / Efe