The journey towards a second independence referendum in Scotland is about to shift to a higher gear. Early next year, the Scottish government will resume campaigning for independence and begin preparations to decide Scotland's future at the polls. This was announced by first minister Nicola Sturgeon in her speech at the 87th annual conference of the Scottish Nationalist Party (SNP) on Monday.

"Over the next year, I will initiate the process necessary to enable a referendum before the end of 2023," Sturgeon promised, assuring that the party will restart the 'Yes' campaign in early spring. “Covid permitting, as we move from winter to spring, the campaign to persuade the majority of people in Scotland that our future will be more secure with an independent nation will resume,” she stated.

Hovering over Sturgeon's promises, however, there is still the question of whether the British government will finally allow a second referendum. So far, Boris Johnson's executive has not made any concessions and continues to refuse to allow it to be held, claiming it is not a priority, among other arguments.

Faced with this, Nicola Sturgeon dedicated some words to Boris Johnson in her speech today. “My message to the prime minister is this: if you have any respect for democracy, and if you have any confidence in your argument against independence, you will also let the people decide,” she asserted. 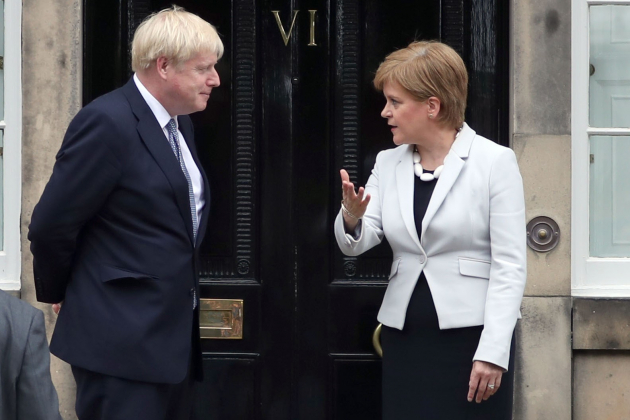 Sturgeon criticized the Conservative government's authoritarian turn and the path the Tories have taken since the Brexit referendum in 2016. "This UK government has taken Scotland out of the EU, the European single market and customs union, completely against the will of the majority who live here", she argued. Scotland and Northern Ireland were the two of the UK's four nations where the option to remain in the European Union won at the polls, with 62% and 55.8% respectively.

In the SNP, they believe Brexit is hurting Scotland’s economy and restricting opportunities for young people. "All of this is bad enough, but what's to come could be much worse," Sturgeon warned. That is why the idea of ​​returning to the European Union through independence is already one of the key arguments of the 'Yes' campaign that will begin next year.

Following the defeat of the Yes vote in Scotland’s first indyref in 2014, with 44.7% of the vote, the SNP has maintained its leadership in Scotland, and at the elections to the Holyrood parliament in May this year was only one seat short of an absolute majority on its own - eventually forming a government with the Scottish Greens, also pro-independence. Thus Sturgeon returned to the first minister's job and came to agreement with the Greens on a roadmap, highlighting the calling of a new referendum before the end of 2023. 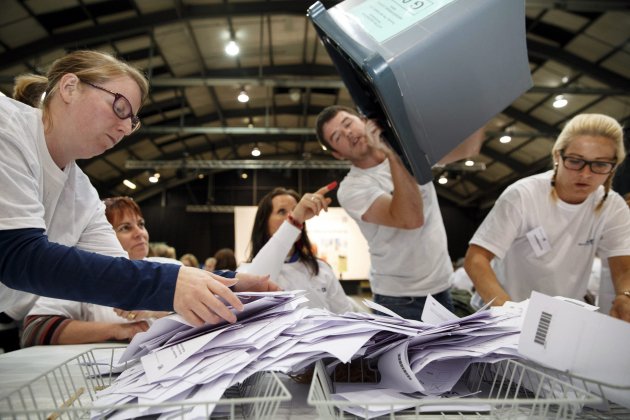 Counting of votes in the 2014 Scottish referendum / Efe

With a view to the new referendum, Sturgeon outlined the main lines of the campaign that her party intends to resume this spring to explain "the opportunities and advantages that independence will open up."

"Re-joining the European family of nations" is clearly one of the key arguments in trying to gain the confidence of those Scots who voted to remain in the EU. "We will be partners of our closest friends in the rest of the UK and a member of the EU committed to the values ​​of equality, democracy and human dignity," Sturgeon said.

In economic matters, the Scottish first minister defended independence as a way to self-manage economic resources and thus be able to "repair the damage of Covid". As well as the management of Scotland's natural resources "to help safeguard our planet and ensure green jobs for the future." "I believe, more than ever in this new world we face, that the best way to secure a better Scotland is to take our future into our own hands," she said.

Sturgeon took as an example the successful cases of other countries that have followed the path of independence over the past sixty years. "For countries the size of Scotland, the simple reality is this: independence works," she summed up. "For today's people and for future generations, this is a future worth defending," Sturgeon concluded.

And what if Boris Johnson refuses a referendum?

The path to an agreed referendum is currently the only one contemplated by the ruling party in Scotland. "We want it to be an agreed, constitutional, legal and binding process. There will be no referendum in Scotland that is not like this, it would be grossly disrespectful for the British government to deny the mandate of the Scottish people that it has restated so many times," SNP foreign minister Alyn Smith defended last week, in a debate with Catalonia's foreign minister, Victòria Alsina.

To achieve a new referendum like the one held in 2014, the British government needs to implement Section 30 of the UK's Scotland Act, under which the Scottish government can be granted powers normally only in the hands of Whitehall. Deviating from this path could end up in the courts.

Faced with the option of the government of Boris Johnson refusing to concede powers under Section 30, other pro-independence sectors, such as the Alba party created by former first minister Alex Salmond, advocate trying to find other ways to achieve independence. One of these being negotiation, which Westminster MP Neale Hanvey argued for in an interview with ElNacional.cat: "What my party is saying is that there are other ways to achieve independence, legal ways, which we need to start exploring, and which have already been used other times," Hanvey proposed.

Without representation in the Scottish Parliament, however, the Alba party's pathways do not appear to have much impact on the Scottish government. What is clear is that with today’s promise from Sturgeon to restart the campaign early next year, there will be movement on the independence chessboard in the coming months. And Boris Johnson will also have to move a piece.