Catalan prisoners and exiles, reunited: the re-encounter (in private) at Waterloo

Last week, the pardons of the Catalan political prisoners; this week, the first reunions between the two parts of the pro-independence leadership, exiles and prisoners, most of whom had been physically separated since autumn 2017. On Friday morning, four of the prisoners travelled to Belgium to meet president Carles Puigdemont and minister Lluís Puig, although the precise moment of re-encounter took place behind closed doors. However, and at the insistence of the media, Puigdemont, Puig and the prisoners later appeared before the press waiting at the door.

Half an hour earlier, Josep Rull, Jordi Turull, Quim Forn and Jordi Sànchez had arrived at the Casa de la República in Waterloo on foot. They had taken a plane at six in the morning, landing in Brussels at eight. They greeted the waiting press, knocked on the door and joked that no one was there. "No one home? We've waited three and a half years, we can wait a few more minutes", proposed Turull.

At that moment Puigdemont was meeting a group who had arrived from Barcelona. Finally, Lluís Puig opened the door. However, the former culture minister also ensured that the image of the critical moment was kept private, and there was virtually nothing to see before the four visitors had disappeared inside and the door closed once again.

It was a different approach from that of the reunion between the prisoners from the ERC party - Oriol Junqueras, Raül Romeva, Carme Forcadell and Dolors Bassa who melted in a collective embrace with their party secretary general Marta Rovira, in Geneva - on camera - on Wednesday. 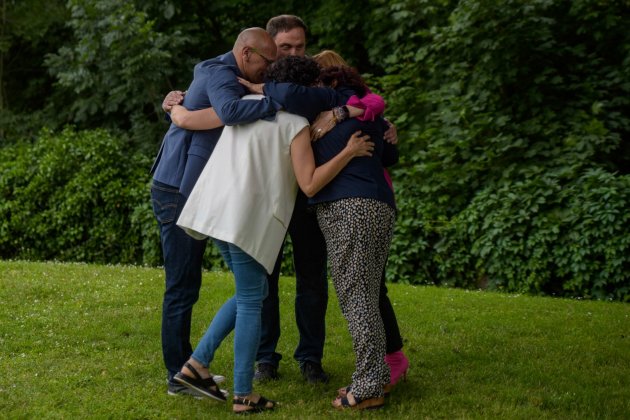 At Waterloo today, the Junts prisoners and exiles limited themselves to a joint appearance minutes later, to pose for photographs in front of the Casa de la República. When asked how the moment of re-encounter had been, after more than three years without having seen each other and in the midst of situations as complex as those they have been through, Rull said it had been "very emotional". "This is truly a reunion," said Turull. 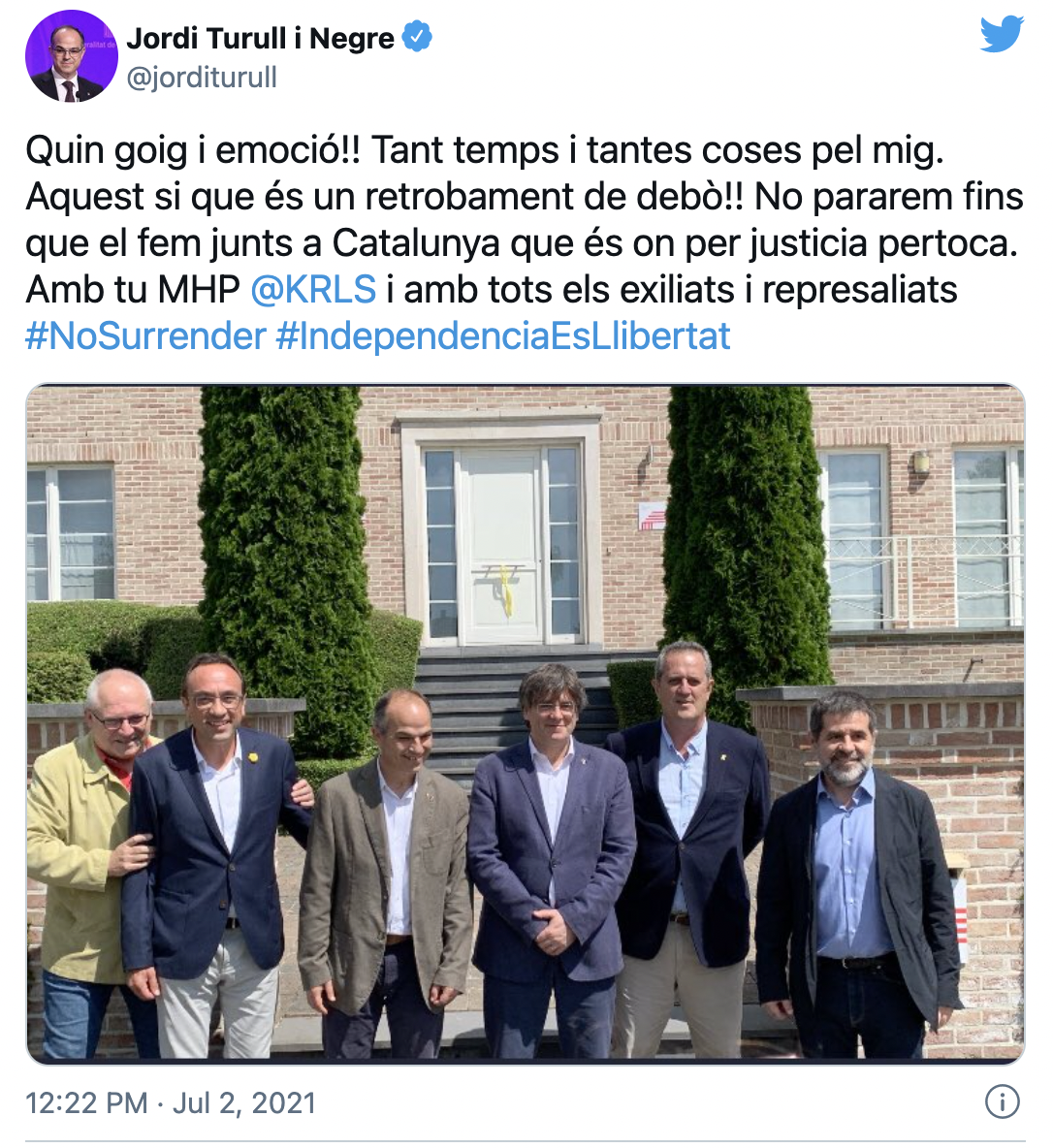 "What joy and emotion!! So much time and so many things that have happened in the meantime. This is truly a reunion!! We won't stop until we do the same thing together in Catalonia, which is where, with justice, it belongs. With you president Puigdemont and with all those in exile and persecuted"- Jordi Turull. 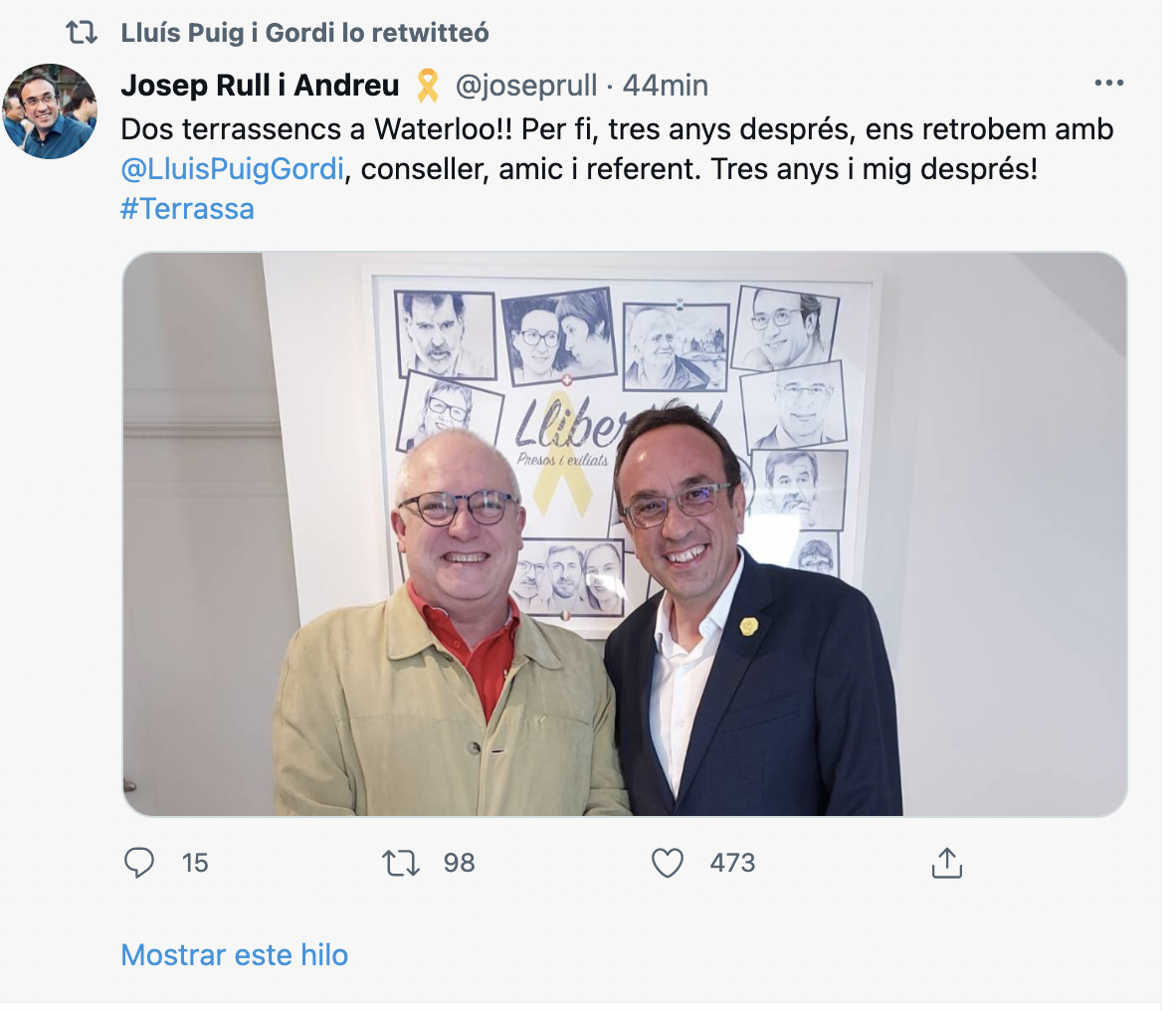 "Two of us from Terrassa in Waterloo!! Finally, three years later, we meet again Lluís Puig, minister, friend and reference point. Three and a half years later!" - Josep Rull

The ministers are to spend the rest of Friday and Saturday in Waterloo. Before the prisoners knocked on the door, the rapper Valtònyc had also arrived at the Casa de la República.

In fact, later on Friday, Carles Puigdemont published an edited video of the re-encounter. It was a relaxing day, with Puigdemont, Puig, Turull, Rull, Forn and Jordi Sànchez, later joined by Clara Ponsatí and Toni Comín. Turull and Puigdemont even picked up the bass and guitar, while Comín sat down at the piano. Here's the video (and below it, the video of the effusive re-encounter in Geneva between Marta Rovira and the ERC prisoners).