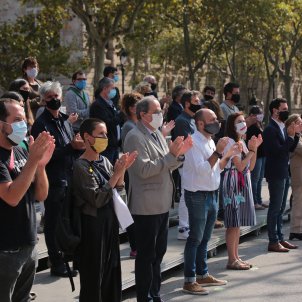 The Catalan pro-independence organizations and poltical parties today have taken part, on this third anniversary of the 1st October 2017 referendum, in a show of unity called by the Òmnium Cultural pro-independence group in front of one of the polling stations that suffered the most serious police violence, that of Institut Pau Claris in Barcelona, ​​located, as it happens, right next to the Catalan High Court. As well as the pro-independence parties, the left-wing Comuns also stated their support, but did not attend or make any unitary statement, only taking part in the group photograph.

Institut Pau Claris is the secondary school where police officers were seen in images physically throwing people downstairs, in some cases via violent kicks to voters who were sitting on the staircase. The group photograph was taken outside the centre, with Quim Torra presiding, two days after being disqualified as Catalan president, in a legislature in which the differences between the pro-independence parties JxCat, ERC and the CUP on the strategy to be followed have become evident.

After that, statements were made by representatives of civil groups Òmnium and the Catalan National Assembly, as well as several of the political parties, offering a reflection on some of the current perspectives within the Catalan independence movement, three years on from the key date of October 1st, 2017. Below, you'll find selected video pieces with full English transcripts.

Òmnium: "An amnesty is essential - but also a new future proposal"

Omnium vice president Marcel Mauri has called for the unity expressed by today's group photo to transpose to joint work "for an amnesty, for the necessary response to the repression" but also "a proposal for the future to culminate the 1st October".

Today is a day to commemorate that exercise in "civil disobedience" in which "the citizens decided to empower themselves" and "the state decided to play all its cards, with violence and repression."

"We’ll keep working for this essential amnesty - for the political prisoners, the exiles and the almost 3,000 people who have been subject to persecution, because we see that this is the only political response. We’ll keep working to respond to the repression, but above all, working for a proposal by the independence movement for the future, that will allow it to keep moving forward and to culminate the exercising of our self determination which we began on 1st October three years ago today."

“It was the start - it was the climax of the state’s repression, the state decided to play all of its cards with violence, with repression - and it wasn’t that that just happened three years ago, but rather that in three years, it hasn’t stopped. We are still in the same position as we were three years ago, with political prisoners, exile, almost 3000 people pursued by the Spanish state.”

Marcel Mauri recalled that he was speaking today "because the president of Òmnium, Jordi Cuixart, is in prison."

ANC: "Essential to recover the initiative"

The president of the Catalan National Assembly (ANC), Elisenda Paluzie, also warned that it is "essential and urgent" to recover a collective project for independence and that the ANC's commitment is to make effective the 2017 declaration of independence.

Elizenda Paluzie's words in the above clip:
"We will only culminate the mandate of the 1st October, make the independence process effective, when we recover the initiative, when we have a project, when once again together, institutions, parties, civil society and citizens - mobilised - have a collective project for independence. At the moment, we don’t have this, and its vital and urgent to recover it."

The interventions of the political parties made evident the strategic differences. ERC spokeswoman Marta Vilalta assured that on 1st October the independence movement won and that it will be able to "do it again and win again" because "repression cannot stop such a broad and transversal movement" and called for "the resolution of this conflict, which is political, through dialogue and negotiation."

Transcript of Marta Vilalta's words in the clip:
"On 1st October we won, now we have to do it again and culminate that path to the Catalan Republic. We’re convinced that we have to get ready to do it again and to win again, and in this way to definitively build the Catalan Republic, and Catalan independence, which we know is the only way to guarantee the equal opportunities for all, guarantee rights and liberties for all citizens of our country."

"Today is 1st October and we have to remember all those people facing reprisals, 2850 people who suffer repression as part of a general case against the independence movement, because repression is the only way that the Spanish state has responded, not politically, not through democratic means, only through repression. But again, on 1st October let’s remember that repression is not enough to stop a movement that’s so broad and transversal and seeks a better future for everyone, which is what the independence movement is."

Demòcrates: "A majority, and then disobedience"

For Toni Castellà, of the Demòcrates party, on 1st October 2017 the "the Spanish state showed its bankruptcy", and the mandate that emerged from the referendum "is very clear". "The only response is to apply the mandate of the 1st October, seek a majority in the Parliament of Catalonia that will lift the suspension of the declaration of independence and initiate a process of disobedience." "The independence movement must fulfill the mandate of the people who, defending the polls with their bodies, voted yes, and yes won."

Toni Castellà's words above:
"Given this [current] situation, there’s only one possible political response which involves all the forcefulness of putting into application the mandate of the 1st October, and that means, when there is an electoral event, we have to seek a majority prepared to carry out independence."

"The only response could be that parliament lifts the suspension on the declaration of independence and thus puts into action, in institutions and amongst the people, an exercise in disobedience, making the definitive rupture with the Spanish state."

The CUP: "Recover the strength of the popular movement"

CUP representative Natàlia Sànchez commented that the 1st October referendum not only happened, but it showed that it could happen. She criticized the current crisis in Catalan institutions arising from three years of limitations and the response of the parties, and called for an end to the "drift and bewilderment and a recovery of strength, direction, initiative and enthusiasm among the independence movement."

"What the 1st October showed us is a motor for the future and not just a look at the past, and that’s the spirit in which the CUP looks at the new political cycle which is now starting." 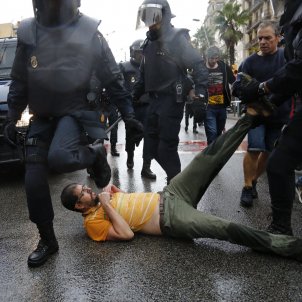