Puigdemont, welcomed to Perpinyà: "I'm excited to be back on Catalan soil" 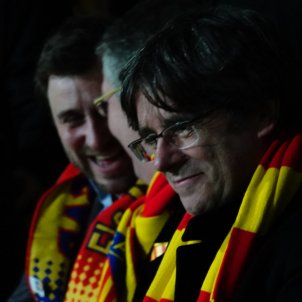 "You can't imagine how emotional we all feel," said exiled Catalan president, Carles Puigdemont, on his arrival at the emblematic USAP rugby stadium in Perpinyà with fellow MEPs Toni Comín and Clara Ponsatí, while supporters chanted "President, President". It was at the stadium that Puigdemont formalized his arrival in Northern Catalonia, exclaiming that he felt "very happy to be on Catalan soil" on the eve of an independence movement rally on Saturday at noon, to be attended by all three of the Catalans-in-exile who are MEPs - Puigdemont, Comín and Ponsatí.

Around midday, he had landed in Carcassonne and shortly before four had posted an Instagram image alongside minister Ponsatí in the town of Salses, the so-called "Gateway to the Catalan Countries". However, Puigdemont's first public appearance was in Perpinyà itself, where there is already a very visible presence of Catalans who have come to attend tomorrow's event organized by the Council for the Republic. Over 70,000 people are expected at Saturday's rally. 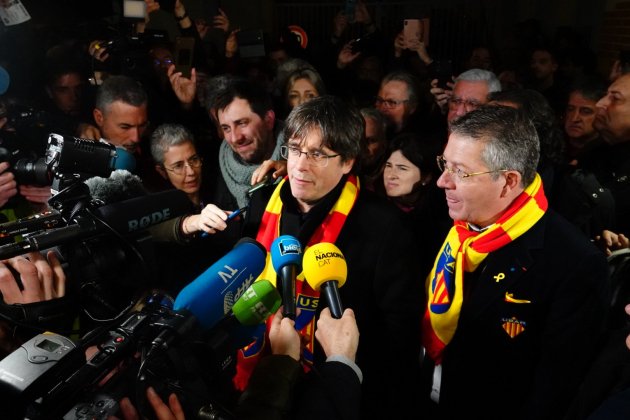 Tonight, the Catalan president in exile attended the USAP rugby match with Rouen, at the invitation of club president François Rivière. On arrival at the stadium, he was shown that his name had been added to the so-called "wall of legends" that presides over the stadium, in which the names of well-known personalities are interspersed with mythical club players.

Puigdemont, accompanied throughout by the ministers Comín and Ponsatí, responded that it was an immense honour. "Through sport, many objectives can be achieved," he commented.

As Puigdemont entered the stadium, wearing a USAP scarf, the music of Lluis Llach's protest song L'Estaca sounded. This was not because it was a special night. Every USAP match starts with the legendary song about using collective effort to overcome adversity. On the field the team's mascot, a Catalan donkey, received the players in their team colours - featuring the four bars of the Catalan flag.

Members of the dialogue table

Puigdemont followed the game from the stands, but did not take the kick-off of honour, which was offered to him. In addition to Ponsatí and Comín, also present were current Catalan minister Jordi Puigneró, the MP Elsa Artadi and the former Catalan government official, Josep Rius - all three of them, members of the Catalan delegation at the dialogue table with the Spanish government.

Many of those present asked for selfies with Puigdemont, before the game started. Around the official box there were more shouts of "president, president" at halftime while a group danced a sardana on the field and some spectators waved estelades.

Lap of the field

Shortly after the end of the game, the Catalan national anthem played through the PA system as Carles Puigdemont came down onto the field. The president walked around the ground, greeting those of the audience that remained, before meeting the USAP players and accompanying them into the tunnel.

Saturday's event will feature the three MEPs who are exiled members of the 2017 Catalan government, while the rest of the Catalan exiles and political prisoners will also take part through videos and live links. Current Catalan president Quim Torra and other JxCat representatives will also be present, although they won't take part.

Before the event, Puigdemont and Torra are to be welcomed to the town hall of Perpinyà by the mayor, Jean Marc Pujol, as well as at the Council of the Eastern Pyrenees Department, where they will also be received by the president, Hermeline Malherbe-Laurent. 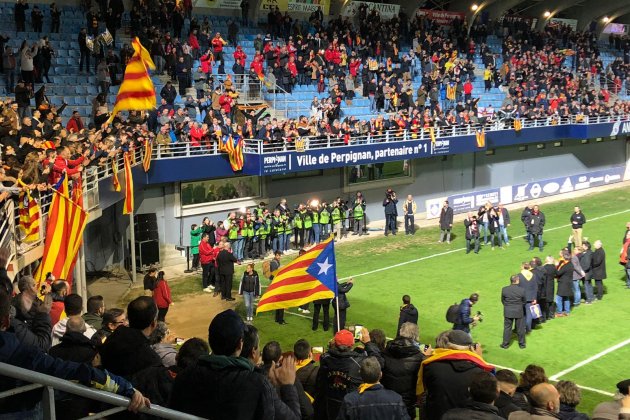 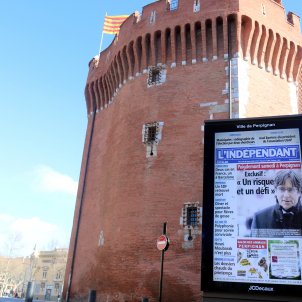 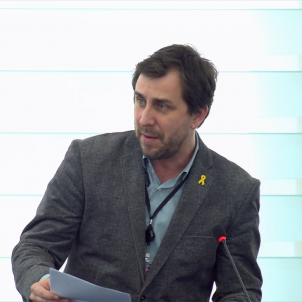